Seventeen days after a Russian civilian airliner was downed over Egypt's Sinai Peninsula on Oct. 31, Russian officials admitted it was a terrorist attack. On Nov. 17 Alexander Bortnikov, the head of Russia's Federal Security Service (FSB), stated that the plane was blown up by an improvised explosive device.

"One can say it was a terrorist act," he was cited by the Interfax news agency as saying at a meeting with President Vladimir Putin. Putin, in turn, promised to intensify the military operation in Syria, as well as "find the terrorists anywhere on earth and punish them," Russian media reported.

The statement came on the heels of a series of terrorist attacks on a football stadium, a concert hall and a restaurant in Paris on Nov. 13 that killed at least 129 people. The Islamic State terrorist organization claimed responsibility for the attacks, as well as the downing of the Russian airliner earlier.

The massacre in Paris made Western leaders contemplate enforcing military operation in Syria against the Islamic State and joining forces with Russia — previously a pariah, criticized for seeming to concentrate war efforts against the opponents of longtime ally Syrian President Bashar Assad instead of terrorists.

The Russian president was one of the first to express condolences to the French on that terrible night — just like after Sept. 11, 2001, when he was the first to call then-president George W. Bush — and offer support in fighting the enemy that turned out to be common to both of them.

"It is obvious that to counter this evil effectively the entire international community needs to truly join efforts," Putin said in his telegram to French President Francois Hollande, published on the Kremlin's official site.

After that, Russian state-owned media changed their anti-Western tune and replaced criticism toward France for its excessive tolerance and openness with sympathy and friendliness.

This, and the fact that on Nov. 17 Putin called the French military "allies" during a meeting on Russia's military actions in Syria, suggested that the Kremlin is interested in making peace with the West, and Putin saw and used the opportunity to make it accept Russia as a force to be reckoned with.

"It's not like Putin has outplayed everyone, but circumstances were definitely in his favor this time," Vladimir Frolov, an international affairs expert, told The Moscow Times. "Most likely Russia will be acknowledged as an equal partner in the fight with the Islamic State and will be collaborated with on both military and diplomatic levels in Syria," he said.

That very same day Russia deployed strategic bombers, some of which haven't been in combat before, to strike the Islamic State stronghold in the Syrian city of Raqqa. Western leaders reacted cautiously, saying that if Russia sticks to targeting IS positions, collaboration is possible. 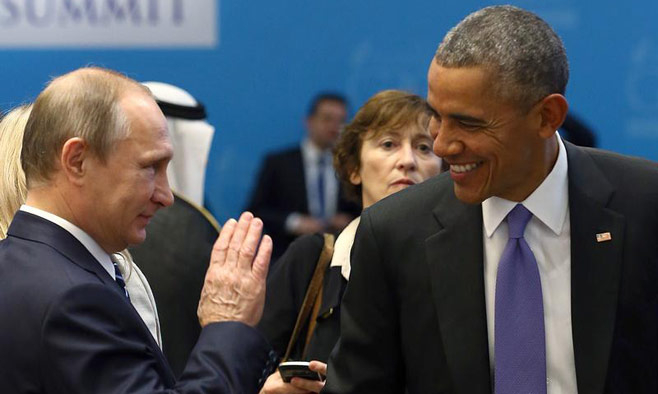 President Putin had good timing: Terrorists attacked Paris a weekend before the G20 summit that Putin attended, giving him a chance to call on the Western countries once again to join forces in the fight against the Islamic State.

On Sunday his informal conversation with U.S. President Barack Obama gripped public attention. It reportedly lasted 20 minutes, and it is still unclear what was discussed, but the mere fact that it happened was interpreted by many as a positive sign of improving relations with the West.

The next day Putin stated that Russia is ready to support the opposition in Syria in its fight with the Islamic State, basically declaring resolved one of the main issues at the core of the disagreements between Russia and Western countries blaming Putin for helping Assad fight the opposition.

"Part of the armed opposition [in Syria] contemplates starting a military operation against IS with Russia's support, and we are ready to supply that support from the air," Putin was cited by TASS as saying Monday. "It might be grounds for later work on resolving political issues [in Syria]," the Russian leader added.

At that same time Hollande spoke at the French parliament, both chambers of which gathered at the Palace of Versailles for the first time since 2009. Among other things he called on creating a unified coalition that could include Russia.

"[It's necessary] to gather everyone who can fight IS into one coalition," he said, promising to meet with both Russian and U.S. presidents in the nearest future, the RBC news agency reported.

All this led to the belief that relations between Russia and the West are finally warming up, a belief that Putin mentioned during a final press conference at the G20.

"[A year ago at the G20 summit] the relations were much more tense [than now]. One can feel it, it's true," he said, adding that creating a joint coalition in Syria is a necessity, and "the tragic events that followed only proved our point."

The only question that remains unanswered at this point — and probably the only thing keeping the parties from shaking hands and officially accepting Russia into the coalition — is the fate of Assad, whom the West wants out of the picture, but whom Russian officials call the only legitimate leader in Syria.

"Until there is a compromise about Assad, Russia and the coalition of the Western countries will fight in Syria in parallel, but not in tandem," Alexei Makarkin, deputy director of the Moscow-based Center for Political Technologies, told The Moscow Times.

Right now Putin needs the West's support more than the West needs his, because he doesn't have anything to offer that Western countries don't have, said Dmitry Oreshkin, an independent political analyst.

"Now he has to deal with Islamic extremists, and these people aren't afraid of missiles — they're ready to suffer losses for the sake of reaching their goals. Putin has stumbled upon an enemy that is much more brutal than he is, and [to win] this fight, he needs the West more than the West needs him," Oreshkin told The Moscow Times. 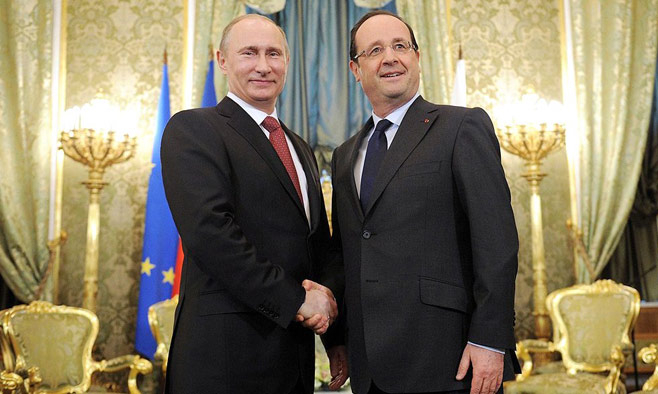 While the question of international consolidation remains open, Russian society seems to be far from united on the tragedy.

Over the weekend Russian social networks were flooded with heated discussions on whether the French were to blame for bringing the attacks on themselves and whether it was appropriate to mourn the victims of attacks in Paris more intensely than those who died in the plane crash in Egypt.

People who wanted to express their condolences and solidarity with Parisians brought flowers and candles to the French Embassy in Moscow on Saturday, creating a 100-meter line, and put overlays of the French flag onto their Facebook profile pictures.

Many blamed the French government for accommodating Syrian refugees and, therefore, bringing the troubles on themselves. Critics cited Putin asking "Do you understand what you've done?" at the United Nations General Assembly in September. Some said the country whose Charlie Hebdo magazine contained "blasphemous" cartoons deserved to be attacked.

This major disagreement on how to perceive the West derives from a historical conflict between Slavophils and Westerners, explained Alexei Roshchin, a social psychologist and expert at the Center of Political Technologies, and terrorist acts in Paris just fueled the fire that has been burning for decades.

"Right now, those with pro-Russian views can't openly bash the West [in the wake of this tragedy]. … They feel trapped, because they feel that through expressing sympathy to Europe that has betrayed us; in their view, they're being dragged into betraying their ideals," he said. "It incites aggression," the psychologist added.

At the same time, not only pro-Russian Internet users are to blame for this aggression; a lot of people with French flag overlays on their profile pictures are, basically, using this tragedy to show one more time that they support the West, Roshchin added. "This way aggression mounts, leading to endless disputes and fights online," he said.

State television channels and radio stations in the beginning contributed to online fights — even after the attacks on Paris — continually discussing the infamous Charlie Hebdo cartoons and blaming France for letting the tragedy happen, said Andrei Arkhangelsky, a columnist for the Slon news website.

"I started listening to the radio around 8 in the morning [on Saturday], and the main idea was that 'tolerance' is to blame, open borders, the cartoons etc. Only after Putin personally expressed his condolences did the tone changed drastically — sympathy was there, without any 'buts,'" he told The Moscow Times. 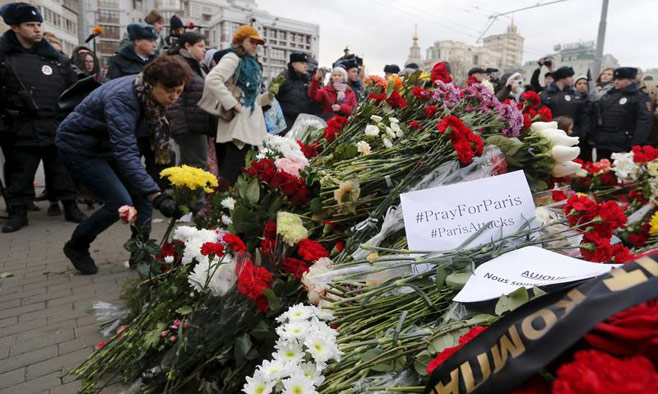 In the meantime, little has changed in terms of Russia's internal affairs, even though the Islamic State has threatened to attack the country in the nearest future.

Right after the attacks on Paris two initiatives gripped public attention, though neither of the two has been seen through yet.

On Saturday officials of Rosaviatsia, the country's aviation watchdog, claimed to be considering a restriction on flights between Moscow and Paris, but then retracted their own statement.

Two days later State Duma deputies called on the FSB to ban Telegram, a messenger app reportedly used by the terrorists in Paris, but no moves have yet been made to comply with that request.

The only thing that has become part of Russians' routine is the evacuation of shopping malls, railway and metro stations, concert halls and other venues all over the country, conducted immediately if the threat of a terrorist act is received by law enforcement services.

Yet Russians don't seem scared: Rumors that more people had started using taxis instead of the metro, fearing the metro would be attacked, were quickly dispelled by taxi companies: Both Uber and Yandex.Taxi representatives told The Moscow Times there had been no sudden growth in the number of orders over the weekend.

"First of all, it's someone else's war, not ours, despite all the pledges to join forces," said Andrei Kolesnikov, an expert for the Moscow Carnegie Center. "In addition to it, terror in Russia has become routine, it has become part of everyday life and is perceived calmly. That's how fatalistic our nation is," he said.

Russian President Vladimir Putin signed a decree Wednesday outlining the launch of an inter-departmental commission that would counter the financing of...
news

The body of a Russian woman who went missing after Friday's terrorist attacks in Paris was identified by her husband on Tuesday, Russia's Foreign Ministry...
opinion

As Muscovites lay flowers before the French Embassy, the depressing irony is that Moscow is not immune to the kind of terrorist attacks which ripped...
about face