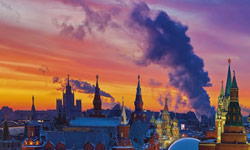 Look down on Red Square and the Kremlin

At the top of the Ritz-Carlton Hotel, the O2 Lounge is not a place for a cheap beer. But since the weather has turned and the terrace is closed until April, the friendly staff will let you go outside and shiver as you gasp at the view of the Kremlin and Red Square. Inside you get the same view, plus Peruvian cuisine, caviar and blinis, and sumptuous traditional and artisanal cocktails.

Located on the 12th and 13th floor of the Peking Hotel in the heart of the city, directly opposite one of the most beautiful metro stations of the capital, Mayakovskaya, the views here are breathtaking. Oddly, they are especially good from the restrooms. Cocktails here are affordable — in the 500-ruble range — if a bit bland. However, you won't care when you're enjoying those views. 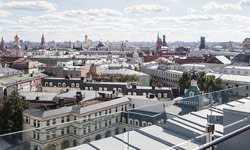 That's right — the Central Children's Store department store has one of the best views in the city. And the best part is that access to the observation deck is free. Once several escalators and another few staircases have been conquered, you will enter a long balcony on the top floor that looks to the south and southeast of the city. True, you will still have to battle your way through masses of teenage girls taking selfies, but the views are worth it. 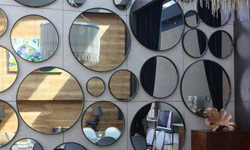 Located on the 62nd floor of the Federation Tower — that tall tower that can be seen from nearly anywhere in town — it comes as no surprise that this place holds the monopoly on the best view in the city. The view is amazing, and so are the prices. But the best views rarely come cheap. Splurge at least once. 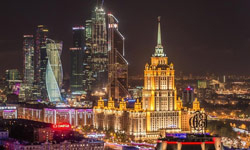 The Lotte Plaza hotel, located at the end of Novy Arbat, also has one of the best views of the city. The bar and restaurant on the 2nd floor open to the west, where at night you can see the Hotel Ukraina (now the Radisson Royal) lit up in the foreground and the skyscrapers of Moscow-City glowing in the distance. Elegant international and Asian cuisine, traditional and original cocktails.