Never in my 25 years of attending opera in Moscow has the term "sensational" come to mind in describing a new production by a local opera theater. At least until now, when sensational seems the most appropriate word to sum up my reaction to the version of Richard Strauss' "Salome" that made its debut last month at Novaya Opera Theater.

As very seldom happens, all of the diverse elements of opera — singing, orchestral direction and playing, stage direction, decor, costumes and lighting — came together in the new "Salome" to form a truly unified whole and to produce an overwhelming operatic experience.

Although "Salome" has regularly appeared on opera stages throughout the world ever since its 1905 premiere in Dresden, Novaya Opera's production is only its fifth ever by a Russian company. It came to the stage in St. Petersburg and at Moscow's Bolshoi Theater during the 1920s and was given two very different productions by St. Petersburg's Mariinsky Theater in 1995 and 2000, the first of which, a rather tame affair, was brought to Moscow for a single performance.

For his libretto, Strauss employed a much-abridged German translation of a play of the same title, written in French by Irishman Oscar Wilde. The story, taken from the Gospels of the Bible's New Testament, finds the mentally unstable Salome, step-daughter of Herod Antipas, the ruler Galilee, obsessed with John the Baptist (called Jokanaan in the opera), who is being kept prisoner in a cistern in the courtyard of Herod's palace.

The action takes place in the courtyard in an unbroken stretch just over 90 minutes long. Salome orders Jokanaan to be brought from the cistern. He resists her advances and scorns her. Herod appears, together with his wife, Herodias, the mother of Salome, and eventually asks Salome to dance, offering her anything she wishes in return. When the dance concludes, Salome insists on having the severed head of Jokanaan brought to her on a silver platter. Herod is horrified and tries to dissuade her, but finally relents. Salome fondles the head, kisses its lips and drifts into complete madness. Herod orders her killed. 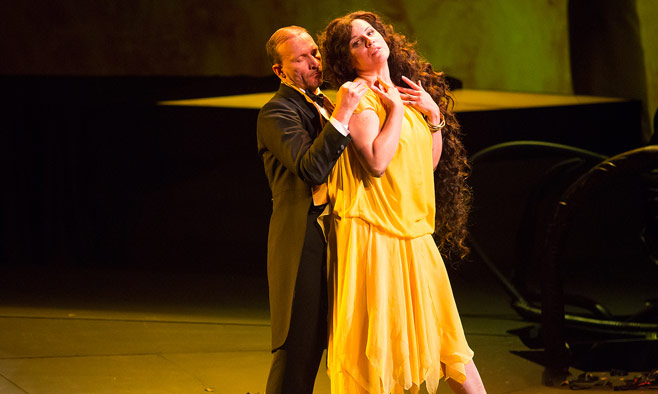 The principal hero at Novaya Opera's "Salome" premiere was the theater's Golden Mask Award-winning principal conductor Jan Latham-Koenig, who drove his orchestra not only to play on a technical level seldom, if ever, to be heard these days in Moscow opera houses, but also to produce a sound that was authentically that of Strauss, as well as to draw singing of mostly superior quality from his two somewhat overlapping casts.

The theater entrusted the staging of "Salome" to Yekaterina Odegova, a young member of its own staff. What she achieved by way of purposeful movement, completely attuned to the music, and moments of striking originality could be held up as an object lesson in the art of operatic stage direction.

The decor, which seemed in large part inspired by the paintings of Austrian symbolist Gustav Klimt, and the costumes of Etel Ioshpa were neither biblical or of any other particular time and place, but proved thoroughly in tune with the Odegova staging.

Prior to the premiere of the new "Salome," it seemed to me doubtful that Novaya Opera or, indeed, any other Moscow opera theater had on its roster of sopranos even one truly adequate interpreter of the opera's fiendishly demanding title role. But by what seemed almost a miracle, Novaya Opera managed to come up with two — Natalya Kreslina, a longtime member of the company with a bright international career, and newcomer Taisiya Yermolayeva, a graduate of the Milan Conservatory who has sung mostly on Italian stages — both of them not just adequate, but truly outstanding.

Of the two, Kreslina displayed a voice closer to that associated with the great soprano Strauss interpreters of past and present, and seemed a more authentic teenager. But there was also much beauty and even greater power in Yermolayeva's voice and more of the "virgin whore" (a term applied to Salome by a noted American scholar) in her interpretation.

Both guest baritone Boris Statsenko and the theater's own Artyom Garnov proved solid Jokanaans, while common to both casts were the splendidly nuanced portrayal by Mariinsky Theater tenor Andrei Popov of the fearful, neurotic Herod and the Herodias, commanding in both appearance and voice, of mezzo-soprano Margarita Nekrasova.