"Star Wars" characters tried to participate in another Ukrainian election, but suffered a setback when authorities in Odessa banned Darth Vader from casting a ballot, threatened to kick out stormtroopers from a polling station, and detained Chewbacca.

"Star Wars" characters have made frequent appearances in Ukraine's elections — 16 Darth Vaders registered as candidates during last year's parliamentary balloting, according to a tally by Ukraine's UNIAN news agency.

This year, a costumed crew made an appearance at a polling station in Odessa on Sunday, when Ukrainians were voting for local officials.

Darth Vader carried a Ukrainian passport and accused officials of "massive falsifications" when his name did not appear on the list of registered voters, the Dumskaya.net news portal reported.

An invasion by Imperial Stormtroopers also caused disturbances at the polling station, where voters tried to take selfies with the troops, before an election commission official, Igor Klyuyev, threatened to have them escorted outside, local Odessa City's First television channel reported.

"If you want to take a selfie with them, go ahead, I allow that, but expelling my bodyguards is not allowed," Darth Vader was quoted by the television channel as telling election officials. 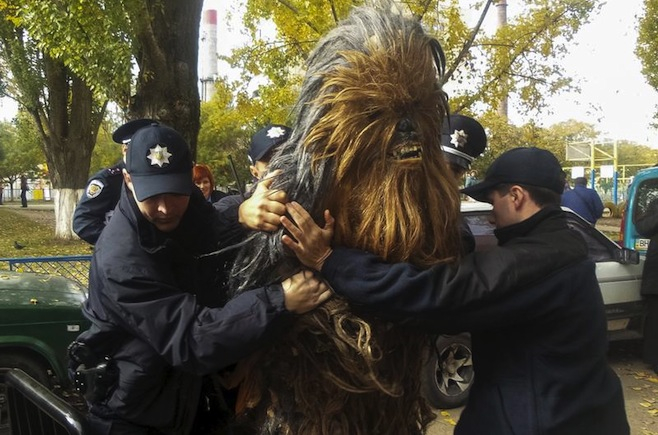 Policemen detain a person dressed as "Star Wars" character Chewbacca during a regional election near a polling station in Odessa.

In the end, police detained another member of Darth Vader's entourage, Chewbacca.

A Ukrainian Twitter user who posted photographs of the incident quipped that the pictures chronicled "nothing unusual — just Chewbacca getting detained for illegal campaigning."

Other reasons proposed for his detention included illegal parking and the failure to produce a license for driving the "Vadermobile," according to Dumskaya.net. The report added that "according to unconfirmed information," police later seized weapons such as a malfunctioning lightsaber from Chewbacca.

A statue of Bolshevik revolutionary Vladimir Lenin in Ukraine's Odessa has been converted into a monument to Darth Vader — the city's response to a...
news

Ukrainians casting their ballots next month may be forgiven for thinking they are being asked to vote for their favorite Star Wars character, with Yoda...
opinion

Victory Day loomed large, but, meanwhile, a thousand small battles rage in Russia between the hosts of order and the forces of common sense. The latter...
ukraine_war

Just a handful of kilometers from the frontline, a shattered village school in the southern Mykolaiv region is a stark sign of the war damage inflicted...