If you ask the average person what comes to mind when they think of Yekaterinburg, they'll probably say that it's a highly polluted industrial city and the site where the Romanov family was executed.

But the truth is quite different. This town in the Urals has established itself as a cultural and artistic destination, where music and art curators put on the kind of programs that their colleagues in Moscow and St. Petersburg would envy.

The Third International Eurasia Music Festival, which was held in October, was conceived of in 2011 as a way of exploring the musical influences between East and West — a natural niche, considering the city's location on the virtual border between Europe and Asia. Held just three times so far, it has evolved into an arts event that pushes cultural boundaries and brings new meanings and energy to the word "dialogue."

This time, the event showcased arts rarely seen in Russia, such as a performance of the members of the Sufi order Al-Tariqa Al-Gazoulia (Egypt); a solo recital of the French pianist Lucas Debargue, who created a sensation at the 2015 Tchaikovsky Competition; or the concert of the European early music ensemble L'Arpeggiata, which creatively blends traditional Mediterranean songs and jazz improvisation. The festival's musical landscape covers two continents and bridges centuries, as it skillfully fuses together works of Beethoven, Bartok, Ligeti, cutting-edge modern Japanese composer Toshio Hosokawa, and contemporary Russian composer Anton Batagov.

Through diversity, the festival's concerts create a vital sense of unity between the audience and the multi-ethnic performing crowd. In this context, Eurasia becomes more than a geographic region. It is a cultural community where both the performers and the listeners belong in equal measure. Members of the Sufi order, who delivered a hypnotizing performance on Oct. 10 in the Sverdlovsk Philharmonic, were not professional musicians. The ensemble is made up of workers, doctors and writers, and the concert in Yekaterinburg was only their second public performance before a secular audience (the first one took place at the Salzburg Festspiele in July 2014). After the first half of the concert, many members of the audience found themselves nodding their heads along with the performers on stage. This ecstatic amateur performance underscored the spiritual power of music.

The festival offered up a wealth of new works. It opened on Oct. 6 with the world premiere of Anton Batagov's "I See Your Dream, You See My Dream," which was commissioned by the festival. Works of Toshio Hosokawa had their Russian premieres during the event. "What we see at this festival is way beyond the dialogue of styles or epochs. Rather, it is a dialogue between different worlds," said Yekaterina Biryukova, classical music editor with the Colta.ru cultural magazine. 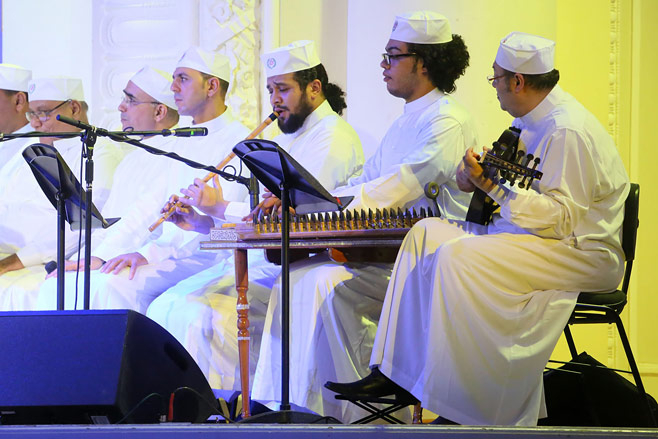 Members of Egypt's Sufi order Al-Tariqa Al-Gazoulia in a performance.

"Yekaterinburg is trying to build up a reputation as the capital of the Urals region, and this ambition is shared by both the residents and the authorities," said Gyulara Sadykh-zade, the program director of the festival. "This means that the city is creating direct connections with the outside world, bypassing Moscow. Business-wise, Yekaterinburg is already a well-established Russian city that hosts the prestigious annual industrial exhibition INNOPROM. For the city, each international arts festival is a chance to launch a spiritual dialogue with the world — something that the city needs very much."

Importantly, this vision is shared by the city's business community. Andrei Bril, chairman of the board of Korin IT& Management holding and the authorized representative of the Guild of Managers and Developers in the Yekaterinburg and Sverdlovsk region, said Yekaterinburg's superb and well-traveled Urals Philharmonic Orchestra is a cultural brand in its own right, and international music festivals help promote this image.

"We are so proud of this orchestra," Bril said. "One important question that the city of Yekaterinburg is facing today is its public reputation. It is high time that Yekaterinburg moves on from its "tsar-killing image" and develops a cultural brand that has much more to do with its current achievements, in addition to the history that we can be proud of. The philharmonic orchestra is brilliant and enthusiastic. It feels a bit like having a great sports team that plays in the Champions League."

Securing funding for a festival with a large international component is a challenge, especially in the context of the plummeting ruble. "We have had to make cuts from the original program due to financial limitations. For example, in addition to the performance of Italy's RAI orchestra, we had planned to bring in Poland's Sinfonia Varsovia and the Lion Symphony Orchestra," Sadykh-zade said. "It helps that the ensembles are willing to help us find solutions. For example, the Hong Kong Youth Orchestra and the members of the Sufi order came to the festival at their own expense, and RAI managed to link the performance in Yekaterinburg with performances in Moscow and St. Petersburg, which helped lower costs."

Financial obstacles notwithstanding, Alexander Kolotursky, the director of  Philharmonic, is nurturing a plan for the philharmonic's next big step — a brand new modern concert hall. The Yekaterinburg Philharmonic Hall has around 600 seats, and the orchestra performs to full houses all year round. During the festival the demand for the tickets is much higher, which means that many people can't get in. It is estimated that about 2.6 billion rubles is needed to build a new modern venue.

Importantly, the philharmonic has not planned to ask the Russian government for money. "We really see this project as a joint effort, and we decided to start with ourselves," Kolotursky said. So before calling for a crowd-funding campaign, the philharmonic management, staff and musicians began collecting donations among themselves. They have already raised about 800,000 rubles.

Over the years,  Yekaterinburg's Urals Philharmonic has raised a dedicated audience that many classical halls can only dream about: curious, sensitive, compassionate and enthusiastic. After every concert of the Eurasia festival, the main foyer was filled with people queuing up to thank the soloists, who always come out to meet the audience; that's one of the festival's traditions. And an audience that comes to listen and learn is as admirable as the festival itself.