A project by a Canadian photographer is drawing attention to an overlooked area of Soviet architecture — bus stop design. Christopher Herwig traveled more than 30,000 kilometers in an obsessive quest to document the fantastical designs of the bus stops across all the 13 countries of the former Soviet Union. He used the crowdfunding platform Kickstarter to raise $10,000 to print a book of his photographs, but the project was so popular he ended up collecting more than $50,000.

The book, which was released as a limited edition of 500 to his backers in 2014, is now being re-released as "Soviet Bus Stops" by the London-based imprint Fuel Publishing.

See the photo gallery: A Bus Stop Tour of the Former Soviet Union

Largely built between the late 1960s and the 1980s, the structures compiled in "Soviet Bus Stops" are otherworldly and a far cry from public buildings constructed during this period, which is remembered for its stagnation in architecture and art. Public buildings in the Soviet Union were strictly regulated and far more modest than during the previous era of highly ornamented Stalinist architecture, but these roadway structures were seen as insignificant, so Soviet authorities left them to local architects to design. The result is structures that favor form over function. These bus stops became outlets for creativity and expressive ideas, and a form of public art that showcased local traditions, materials, and heritage.

Some of the bus stops featured in the book recall the constructivist structures of the 1920s-1930s, some look like sea creatures or corals, others look like spaceships, and one lone shelter in the foothills of the Altai Mountains, Kazakhstan features a painting of a rancher on its outside walls and a life-sized sculpture of a cow inside. The book even displays one shelter by Georgian sculptor Zurab Tsereteli, better known for his commissions in Moscow by former Mayor Yury Luzhkov, who began his career as a bus stop designer in Tbilisi.

The photographs were compiled over a period of 12 years. Herwig first noticed them on a cycling trip between London and St. Petersburg and began to photograph them. Frequent visits to former Soviet states were not difficult for Herwig, as the photographer subsequently moved to Kazakhstan and lived there from 2003–06 while his wife was working for the United Nations Development Program in Central Asia.

He made his trips to photograph bus stops in off the beaten track places like Khujand, Tajikistan; Echmiadzin, Armenia; Gudauta, Abkhazia; and Balykchy, Kyrgyzstan from his base in Almaty. And although those distances seem vast, he said that he traveled farthest between sites in Kazakhstan, where he was based.

"There is much to offer, from nature to culture to plenty of fun people," Herwig reminisced about traveling around the region in an interview with The Moscow Times. "The fact that much of it was closed to the West for so long gives it an element of the unexpected with limited expectation." 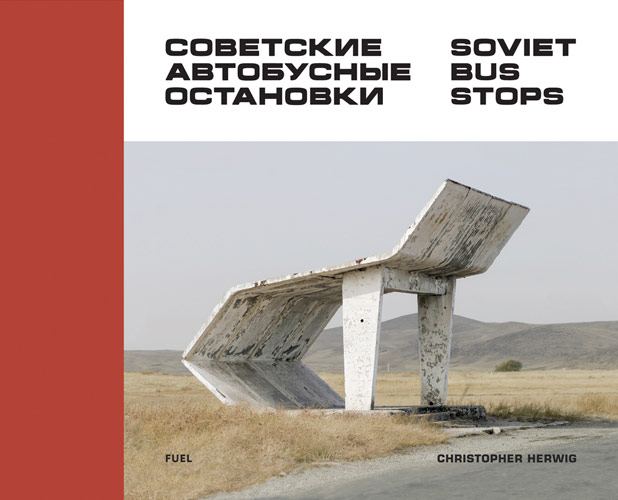 An abandoned futuristic bus stop outside the town of Taraz, Kazakhstan.

As bus stops in cities were more likely to be standard productions or replaced by now, Herwig often had to travel far to get his photos, especially since many of them now lie on abandoned routes, or had no roads connected to them, or were stops for villages that no longer exist. "Many of the fantastic bus stops are found outside small villages and sometimes even in the most unexpected locations on dirt roads with no signs of civilization anywhere, which added to the mystery and beauty," Herwig explained.

In an essay accompanying the publication, architectural historian Vera Kavalkova-Halvarsson explains that in the Soviet Union there were standardized bus stop designs developed by the Soyuzdorproekt (Road Design Union), but designers preferred to develop their own ideas and have unique shelters. These structures often brought together Soviet socialist art and local themes, and as a result they became brand advertisements for the district or region and helped accentuate a sense of place.

Herwig said it was a mix of interests and motivation that led to his fascination with Soviet bus stops. "As much as I was interested in the unique architecture of the bus stops, I was also drawn to the hunt. Finding these bus stops, sometimes along the most remote unpaved roads, made for the sweetest unexpected discovery — a piece of art that at first seems out of place, but after appreciating it with the landscape around it, it's absolutely perfect."

Herwig now works with development and UN agencies in Africa and the Middle East, mainly on the Syria crisis. He said that he has no other large project in mind at the moment, but adds, "If I can find the time, I started a project a few years ago photographing the places with the most rain on earth. I realized it takes much more time and luck than I have at the moment."

"Soviet Bus Stops" is published by Fuel Publishing and is available online at fuel-design.com.