With black-rice hair and a shawl made of spaghetti, Russians have given their own twist to the iconic "Mona Lisa" painting.

The dish's ingredients included rice from the Krasnodar region, cheese from Barnaul, veal, spaghetti and mussels — all of which were sourced in Russia, the report said.

Russia in August extended by one year a ban on the import of a range of Western food products — including meat, fish, dairy and vegetables — in retaliation for sanctions imposed on the country over its role in the Ukraine crisis.

At 193 centimeters by 103 centimeters in size, the edible "Mona Lisa" was much bigger than the original — which measures 77 by 53 centimeters and is on view at the Louvre museum in Paris. 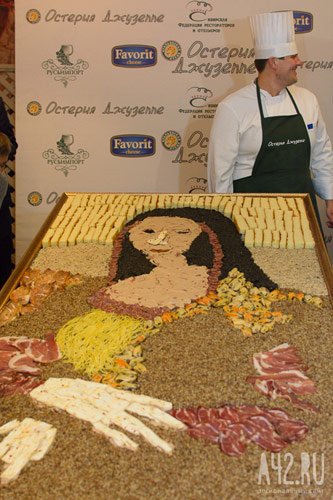 All of the dish's ingredients were sourced in Russia, the report said.

The event included a quiz on the well-known Italian painter and a competition for women to recreate the model's famously mysterious smile, the report said.

The Osteria Giuseppe restaurant has applied to be included in the Guinness World Book of Records with the stunt, the report said. The real "Mona Lisa" already holds a record in the book for the highest insurance valuation for a painting, at $100 million.

Edible paintings seem to be en vogue in the Kemerovo region — at an event in honor of Russia's Year of Literature, teachers earlier this week presented a food painting featuring a portrait of Russian poet Alexander Pushkin.

The edible Pushkin portrait used caviar and cheese as its raw materials, news outlet Gazeta.a42.ru reported, citing the regional authorities' press service, without specifying whether those too had been domestically sourced.

The "Mona Lisa" was painted by Italian polymath da Vinci around 1503 and is thought to be a portrait of the wife of a Florentine merchant called Francesco del Giocondo.