In 2010, Gennady Kravtsov wrote a job application letter, translated it using an online program, and sent it to a Swedish defense firm.

Four year later, as Russia’s relationship with the West deteriorated over Ukraine, Kravtsov — who had worked for Russia’s GRU military intelligence agency as an engineer specializing in satellites between 1990 and 2005 — was arrested on a Moscow street by security service officers and charged with treason.

Prosecutors have since requested a 15-year sentence in a case that Kravtsov’s lawyer said has been marred by irregularities and an unusual brutality. A Moscow court is due to decide his sentence Monday, and those involved hold out little hope of leniency.

“He just wanted to know whether he was needed or not … he shouldn’t get 15 years for that, not in any country,” Kravtsov’s wife, Alla Kravtsova, told The Moscow Times.

“It’s completely clear that they [the authorities] need spies,” she added, referring to a series of espionage cases that has swept the country during the last 18 months.

Kravtsov, who maintains his innocence, is one of several Russians accused of treason, a charge that has become more common since anti-U.S. rhetoric from the Kremlin redolent of the Cold War intensified, and Russia’s international isolation deepened during the Ukraine crisis. More and more, Russian officials portray any association with foreigners or foreign organizations as a possible threat to national security.

Treason in the Air

The number of treason convictions in Russia jumped sharply in 2014, and anecdotal evidence suggests that the number of cases has continued to grow.

There were 15 treason convictions last year and in all cases the defendants were given prison terms, the RBC news website reported earlier last year, citing Supreme Court data. In 2013 there were just four convictions, according to RBC.

The maximum punishment for treason under Russian law is 20 years in jail.

“For somebody it means 15 years in prison, while for someone else it mean extra stars on their epaulettes: State security officers make their careers using these cases,” said Kravtsov’s lawyer Ivan Pavlov, who has defended many of those accused of treason.

All in the Letters

After leaving the GRU in 2005, according to his wife, Kravtsov worked at a series of state defense companies — quitting each time after becoming disillusioned with the level of corruption and incompetence.

In 2010, after his security clearance was downgraded and he became eligible to receive a foreign passport, Kravtsov decided to e-mail a Swedish company.

He used Yandex Translate to translate his letter from Russian into English and sent it off. The firm replied declining his services because he was not a Swedish national.

“He’s an idealist, he can’t bear lies or stupid bosses,” said Kravtsova. “He wrote the letter to Sweden out of vexation, it was a cry from the heart.”

Officers from Russia’s Federal Security Service, a successor agency to the Soviet-era KGB, only questioned the scientist for the first time in 2013 — after he wrote another letter looking for a job, this time to the Minister of Defense in Belarus.

“It was a childish thing to do,” said Kravtsova of the handwritten letter to Belarus. “That day they came to us with a search warrant and confiscated our computer.”

On the computer they found a copy of the letter to the Swedish company, and after a year of cooperating with investigators, in May 2014 Kravtsov was arrested. He has been held in Moscow’s notorious Lefortovo prison ever since. 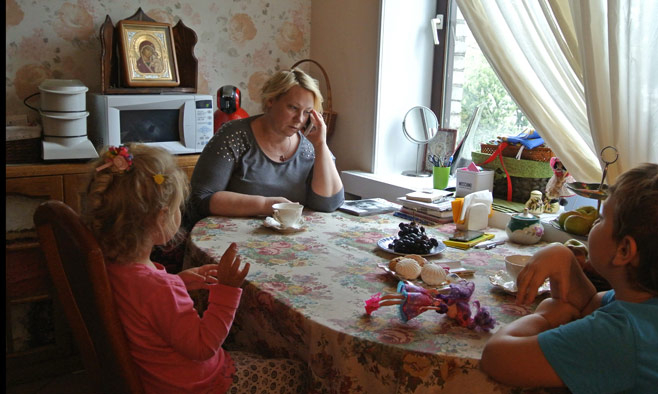 Alla Kravtsova at the kitchen table with her daughter Vasilisa and son Anton at their home in northern Moscow.

Both Pavlov and Kravtsova allege that the engineer was subjected to sustained psychological pressure in prison from investigators as they sought to extract a confession.

Kravtsova said investigators told her that attempts to hire a lawyer or contact journalists would result in a harsher sentence for her husband.

All proceedings at the trial were closed and secrecy restrictions meant some information was not even released to Kravtsov. Prosecutors called three witnesses — two acquaintances of Kravtsov’s and one FSB officer — but the defense was not allowed to call any.

Pavlov, who is barred from revealing details of the case because of secrecy clauses, said all of the defense’s petitions were declined. “We were not allowed to bring anything new to the case, our arms and legs were tied and our eyes were blindfolded,” he wrote on his blog last week.

Kravtsov has never denied writing the letter to the Swedish firm, but rejects the treason charges and reportedly gave a bitter speech during the court’s summing up.

“There were no state secrets in that letter,” said Pavlov. “There was no intention to endanger external security.”

‘I Believe in Miracles’

“He is a scientist and he is not equipped for daily life,” she said. “He is not capable of falsehood or treachery … he would never have done anything against his country.”

Since his arrest, Kravtsova said that she has been researching famous spy cases and got in touch with Igor Sutyagin, a military expert jailed for espionage and released in a dramatic 2010 spy swap with the United States after 11 years in prison.

The couple’s two children — aged 4 and 8 — know that their father is in prison because of all the conversations about him at home, said Kravtsova.

Kravtsov initially expected the case to unravel and looked to be released every two months when his detention status came up for renewal, according to his wife, but he is now resigned to his fate and expects to be given a long prison term Monday.

Kravtsova said that she retains hope, partly for the sake of the children.