The award-winning photographer Vladimir Filonov has worked for The Moscow Times since it began publication in 1992. Over the years he has let his photographs speak for him, either in the pages of the newspaper or in exhibitions. But on the occasion of his solo exhibition at Brothers Lumiere Center of Photography, we asked him to talk about photography, the photographer's life, working at a newspaper, and what he will never forget. 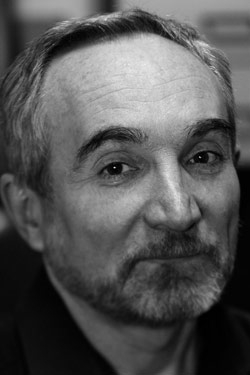 Vladimir Filonov by his colleague

When I was a child I was given a camera — a Smena 2 that was very popular at the time. I took some photos and then quit. Later, when I was studying geophysics in my first year at the institute, we went on a field trip high up in the Dombai mountains. It was so beautiful that I wanted to photograph it. When I got home I dug out that old Smena camera and started taking pictures.

… After the army, it was hard for me to decide between electronics and photography. Electronics were attractive. The job offered interesting assignments, business trips, all kinds of equipment, a good salary — excellent conditions. But after a while, I quit and went to be a photographer in a construction company. I worked alone in a basement, and it was lonely after working in a collective, so after a while there I went back to electronics. For a long time I kept going back and forth.

In those days, photographers were divided into professionals and amateurs. The word for amateur in Russian is literally "a lover," and that seems right to me — a lover of photography.

In about 1978 or so, I started to travel in a car around the country with two other photographers. We had no particular goals, no plan for the photographs later. We knew that when we came into a town we'd find some photographers we could stay with and that we'd have plenty to talk about.

That was when I saw the reality of life in the countryside — so different than what we had been told. Once we went to a home for elderly people in an old monastery … I was beside myself for three months. These were people who had worked their whole lives and now they were living out their lives in absolutely horrendous conditions.

In Moscow in the early 1990s I met an American journalist named Carey Goldberg. Derk Sauer wanted her to work for a new publication he was trying to put out called Moscow Magazine. She said she'd only work with me, so Derk asked me to move up from Ukraine. I wasn't sure about it. I didn't want to do photojournalism, but I agreed to work for the magazine. It didn't last long. But Derk began to publish a small newspaper that would turn into The Moscow Times. I thought I'd do it for three months. That was 1991.

What I didn't like about newspapers is that you had to work so quickly. But then I began to see that that being quick was actually a good thing. I'd wake up and be ready to go. After a while, I got into a kind of state of readiness — like a warrior ready for battle at any moment. Another part of the job is making contact with people — it's an art form. Working at the paper taught me how to make contact with people very quickly.

On one of our trips the car broke down and we had to stop. We put up tents, spent the night, and in the morning we started fixing the car. Across the road were three ramshackle houses. Two old ladies came out of their houses and went to the third house. They knocked on the door. I went over and asked what was wrong. They said that their neighbor hadn't come out — they thought she might have died. But then she came outside — a withered old lady in her 80s. She came out of that tumbledown house and sat on the porch. Her neighbors had brought her some tomatoes. She had a son who lived 16 kilometers away and didn't visit. The house was falling apart. She sat like Baba Yaga by that hovel.

I think about that, and I think about the old people's home. Or waking up outside of Kostroma once on a misty morning. I went outside into all that damp fog … it was unreal. There was a sense of ecstasy when you have no thoughts, you just dissolve into the world around you. You can't even think about the f-stop or aperture — or, that is, you try to think at first and then you stop thinking and it all happens anyway.

A camera is an instrument that allows you to know life. It's like a stick you poke into an anthill. The laws of society don't let you do certain things, find out something that you're curious about, go up and talk to people. But a camera lets you do that. If not for the camera I wouldn't have met so many people, or had so many experiences, or gone to so many places. A camera allows you to make connections, understand why something is there.

If the composition is perfect, the photograph is almost always dead. It comes alive only when there is something not quite finished. A photograph is always born on the edge of a moment, when the moment is unstable. If it's staged, nothing happens. It won't happen when you wait for it — when you wait for someone to walk past a store window so you can catch his reflection. It happens when you give up and turn away.

I still think of myself as an amateur — a lover of photography. And even after all these years I love to come into work and put my thumb drive in the computer. I'm curious to see how the photos came out. Did I catch the moment?

The exhibition "Document/Metaphor. Vladimir Filonov" will run at the Brothers Lumiere Center of Photography from Wednesday until Oct 11. The Center is at 3 Bolotnaya Naberezhnaya, Bldg. 1. Metro Kropotkinskaya. Open noon to 9 p.m., Sat. and Sun. 11 a.m. to 9 p.m., closed Mon. 495-228-9878, lumiere.ru.