BERLIN — Despite Western sanctions and the economic decline in Russia, what matters for Germany's BSH, one of the largest home appliance producers in the world, is the potential scale of the Russian market, said Norbert Klein, the company's president for Turkey, the Middle East, Africa, Russia and CIS countries.

Klein expects Russia's economy to recover by 2018-19 and eventually become the largest market in Europe. Therefore, BSH — since 2015 solely owned by the Robert Bosch company — will remain active in Russia, investing 10 million euros this year, having poured more than 150 million into the country since 2005, including into the opening of two factories and a logistics center in St. Petersburg.

In order to safeguard these factories from the crisis, the company has started to export their products abroad. Today, Russian-made Bosch washing machines are sold in Ukraine, Poland, Kazakhstan, Turkey, Scandinavia and Hong Kong, among other markets. In 2013, the company exported 50,000 items from its Russian factories, and this year that figure is planned to almost double to 90,000.

The Moscow Times spoke with Klein on Monday during IFA Berlin, one of the biggest trade shows for consumer electronics, about the potential of the Russian economy, sanctions and how Russian consumers differ from Europeans. 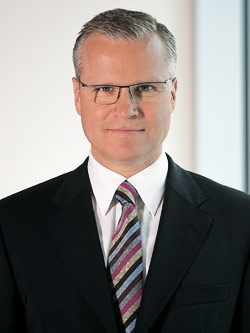 Q: What are the main challenges for your company in Russia?

A: Russia is a very important market for us. It is one of the biggest markets in Europe and will become the biggest in a few years. We strongly believe in this market.

Of course, what is happening now is a challenge, because due to the economic situation the market has contracted by around 35 percent this year, losing 1.5 million units overall [in decreased sales]. This is something that we expected before — if you look at our plans, we saw that the market would be quite bumpy and we prepared ourselves for such situations. Unfortunately, all the key players have to follow the ruble in their pricing and that is a challenge for the end consumer.

At the same time, we see this economic crisis as an opportunity. In difficult times, if you are strong you can lay foundations for the future, when the market will grow again. From our internal perspective we think that the market will start recovering as early as next year and step by step we will see full recovery in three to four years.

Q: What are your predictions for the Russian economy, given slumping oil prices, sanctions and other problems?

A: We have have just completed our strategic planning for my region. Russia is by far the biggest market for us. Today it is smaller than Turkey because of the crisis, but for our strategy what is important is the future, not what is happening right now. Now we already have new product platforms set to be unveiled in the next couple of years. We are investing in future products in Russia. This is our road map, so these investments are already firm.

Q: How does the decision-making process work regarding your development in Russia?

A: We have five regions that are fully responsible for their businesses. They have a short- and long-term top-down target. The shareholders tell me that they expect me in the next 10 years to achieve this turnover with that market share and that profitability for my region.

Then we sit down and analyze the markets and see what we can achieve. We look at the market, at the growth potential and we look at what is needed to achieve our target. Then we put it all together as a document and then the group meets for one week in July. All the five regions and the corporate leadership come together, with every region showing what they want to do. We have a five-day discussion and at the end of the day the product road maps and strategic targets get approved. Then the race is on — based on this road map the technicians and engineers work on developing our products.

Q: Have any of your investment plans in Russia been affected by the crisis?

A: We have already invested in Russia in the past, so we already had enough capacity to grow. Unfortunately, now the volumes are smaller, so we are trying to safeguard our factories. To that extent, we have started to export our products from Russia to Poland, Western Europe, Kazakhstan, Armenia, Georgia and Azerbaijan. We see the export business as a balance to our local business.

Q: Did you adjust prices accordingly as the ruble decreased against major currencies?

A: More or less. At the end, even if we are producing in Russia, the price is still not fully ruble-based.

Q: To what extent?

A: I would say 60-70 percent of the price is not ruble-based. Steel and plastic are traded in dollars.

A: In principle, steel is traded in dollars, just like oil or plastic. There are some inputs that are locally based, but in the end you cannot produce in Russia and be fully ruble-based.

Q: Is the fact that labor costs have decreased in Russia an advantage for you?

A: Yes, but labor costs in our products account for only 10 percent, I would say. Therefore it doesn't have a big impact on the price.

Q: Have sanctions against Russia affected your business in the country?

A: We go into a country because we are convinced that this is a market that is interesting for us. Sanctions or no sanctions — it doesn't matter. We are in countries all around the world: Africa, Turkey, Russia, you have a political environment everywhere. We simply don't care. We stay out of politics. What is important for us is the market potential.

Q: So the scale of the economy and purchasing power are the most important factors for you?

A: Yes, and frankly speaking these sanctions have only indirectly affected business. Due to the crisis the market went down, that's how we felt it.

Q: So would you say that the market fall was in any way due to sanctions?

A: Of course, but the market always goes up and down. For us it doesn't matter if there are sanctions. We strongly believe in Russia as a big market and we will do that in the future. Sanctions come and go.

Q: You are based in Istanbul, but Russia is the biggest market that you manage. Why are you not based in Moscow?

A: Turkey is a very important research, development and production hub for the group. Istanbul is the biggest single production location in the world, including Germany. We have a big regional development center.

Q: Does Turkey have a better business environment than Russia?

A: We are based in Turkey because we were already there.

Q: Many experts agree that the current crisis in Russia was triggered by the structural weaknesses of its economy, rather than by sanctions or even oil prices. Do you think that Russia needs to reform its institutions?

A: That is a topic valid for many markets and it is also true for Russia. You need to do many structural reforms over many years which have to be done step by step. Once there is a crisis, all the structural difficulties kick in.

Q: Do you conduct any research and development in Russia?

A: Yes, of course. We are very interested in learning how Russian consumers look at products. We have to know what they really need and develop the required products locally. Before, everything was done in Germany, but now we are moving these functions into the regions.

Q: Do Russian engineers develop your products in Russia?

A: Yes, and we also have a couple of engineers coming from St. Petersburg to Istanbul. We try to exchange people. We have people from Russia, Ukraine, Kazakhstan, Africa, the Middle East. It is all very mixed and we want to make sure that we have people from diverse cultures in order to make the right product.

Q: Do you plan to expand your research in Russia?

A: Yes, and we already do that. Today we are among the top three players in the Russian market and we want to grow. The only way we can do that is if we know more about what our consumers in Russia will want in five to six years.

Q: How does your export business in Russia work logistically?

A: It is a little bit difficult. Russia is a very big country, and road conditions are not always very good so packaging has to be different. This is a challenge, of course.

We would prefer to ship by train, but we have no railway connection at the plant, so we use trucks. As the market grows, we can think of another options. Now we have the [Russia-led] Customs Union coming: We have [free trade with] Kazakhstan, Armenia and Kyrgyzstan. This is a big customs advantage. The bigger the market, the better.

Q: Do you ship to Ukraine?

A: Ukraine was a little bit difficult because people would not buy products made in Russia, but now it is coming back. That's the way politics works: it goes up and down.

Q: What makes the Russian consumer distinctive, how do they differ from European ones?

A: The size of the products is smaller. You have smaller apartments, smaller kitchens, also doors are not that wide. So you have slimline washing machines, shorter fridges. If you go to Turkey it is completely different: They like big machines. In Africa they want even bigger machines — some families share washing machines there, you could put a dog in them!

Q: So does that mean that you cannot export from Russia to Turkey?

A: Yes, but we also have slimline washing machines in other markets. We sell them in Europe, for instance. Germany is also a market where you have [slimline] fridges just the same as in Russia, because Germans are very organized [at putting their food in order in a small space].

Q: So would it be possible to buy in Germany a Bosch fridge or washing machine made in Russia?

Yes, as I mentioned we are already exporting them to Poland and around the post-Soviet space. For instance, if we launch a new slimline washing machine, why not? I don't see a problem. These "made in a country" labels are irrelevant. We have the same production and quality standards wherever we produce. We have the same production lines and machines, and our workers are trained to the same standards. For instance, in Turkey we have quality standards that we couldn't achieve in Germany.

The Moscow Times was a guest of BSH for the IFA 2015 trade show in Berlin.

The text of the article has been corrected to reflect that BSH is no longer a joint venture between the Robert Bosch company and Siemens AG.

The move comes amid speculation Moscow could establish permanent control over areas it has seized in Ukraine.
‘Three months of heroism’

Russia is now focused on expanding its gains in eastern Donbas, home to pro-Russian separatists, as well as the southern coast.
closer to default

The United States on Tuesday ended an exemption allowing Moscow to make the payments in dollars held in Russia.