This year Moscow is celebrating its 868th anniversary with an extravaganza of over 500 events, including 300 concerts, almost 250 tours and excursions, activities in 100 city parks, and another hundred or so workshops, pageants and other things to do, buy, eat, watch, listen to, or dance to. The city expects that at least 10 million people will participate in the celebration, which truly offers something for everyone — except, of course, peace and quiet.

It all starts at 10 a.m. on Saturday, when 1,200 musicians from 12 countries participating in the Spasskaya Bashnya military music festival will march — festively, musically, and militarily — up Tverskaya Ulitsa to Pushkin Square. After that, the city will be filled with triumphal arches, gastronomical festivals, horses, chess matches, bicycle parades and dozens of other hands-on sporting events, not to mention music all over the city.

Here at The Moscow Times culture desk, we’ve been combing through websites and press releases, trying to come up with our list of weekend favorites. What we’ve figured out so far: Almost every event is free, including the huge Aerosmith concert to be held on Lubyanskaya Ploshchad on Saturday evening. Most museums will also be open free of charge and will have special tours and events. Streets in the center and near various event sites will be closed to traffic, so plan on either walking or using the metro.

The best source of information about the celebration is found in Russian at ялюблюмоскву.рф. Some information in English can be found on the Moscow Mayor’s site: mos.ru/en and other city hosting organizations. But exact concert and activity schedules are often hard to come by. Just go forth and make merry.

Music in the Parks

The city parks will be alive with the sounds of music — all kinds of music. Sokolniki Park is having a jazz festival with jazz musicians from Russia, Europe and the U.S. Vorontsovsky Park is also going jazzy with concerts of mostly Russian jazz bands. But Krasnaya Presnya Park is going back in time. Visitors will be transported back to Moscow circa 1970, with jazz, Italian and Russian pop music from that decade, dance flash mobs, literature readings, kids’ classes and even musician Alexander Sklyar performing with Maxim Piganov’s “Trombone Show.” Don’t ask; we don’t know.

The cool hipster music will be at Muzeon and Gorky Park. Muzeon is holding the Fields festival of avant-garde music on Saturday. Four stages will be available for sound art and improv. On Sunday it’s Motherland — Russian musicians playing indie and experimental rock, and abstract hip-hop.

Across the street Gorky Park is hosting the Moscow Windows festival. The park alleys will be lined with typical Moscow apartments, and all day songs will waft out of their “windows.” Groups will perform throughout the park and at the Bolshoye Massovoye Pole in the evenings, and the theater will show Johnny O’Reilly’s film “Moscow Never Sleeps.”

And if you just can’t decide what kind of music you want — go to Perovsky Park. It will be divided into three eras: Avant-Garde Moscow — with a performance of Vladimir Mayakovsky meeting Lilya Brik in Paris in the 1920s; 1960s Moscow — with boogie-woogie and twist contests; and Today’s Moscow — with robots, 3-D printers and the group ARTEMIEV. 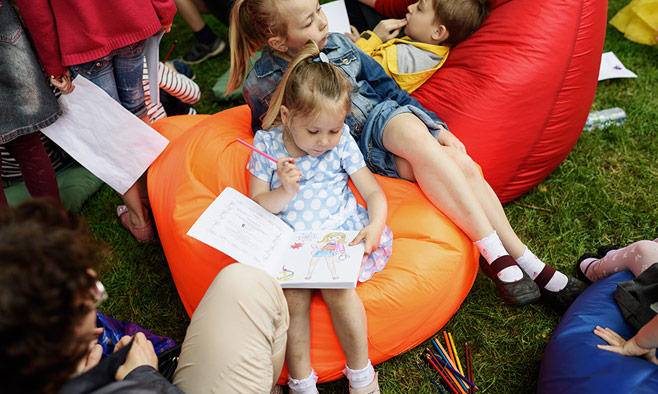 Children and their parents can take a creative break at the Gogol House.

rom Saturday until Sept. 13, Red Square will be taken over by the Spasskaya Bashnya Military Music Festival. If you’re imagining brass bands oom-pah-pahing across the square — buy a ticket and come to be amazed. In addition to many Russian bands, you can see the spectacularly ornamented Armed Forces Band from Pakistan, the Spanish Royal Andalusian School of Equestrian Art, Ireland’s Le Cheile Sa Cheol Massed Pipes and Drums, and what looks to be the festival show-stopper: the Belgian Royal Stiltwalkers. For full schedule, lots of history and one-stop ticket shopping, see: kremlin-military-tattoo.ru.

March of Theaters in Hermitage Garden

If you love theater, plan on spending up to 12 hours in the Hermitage Garden park on Saturday and Sunday. The park, where the very first performances of Anton Chekhov’s play “The Seagull” were held over a century ago, is hosting a marathon of plays from 11 Moscow theaters — the largest open-air theater festival in Russia. Among the performing theaters are the Taganka Theater, Moscow Ballet, the Meyerhold Theater, the Obraztsov Puppet Theater, and the Natalya Sats Children’s Musical Theater. The group Liquid Theater is premiering a site-specific production dedicated to the 70th anniversary of the end of the Great Patriotic War. You can find a schedule of events in Russian at  mosgorsad.ru.

Most of the hundreds of city day events will make kids of any age happy, but a few venues are dedicated solely to the little guys. At VDNKh park, nearly 15 separate venues will be set up for every game, contest, musical event, class or play group you can imagine. In the city center, Tsvetnoi Bulvar will be turned into a mini Kidsville, with a horse show on Saturday and a festival on Sunday. For some creative fun that’s a bit away from the crowds, stop into the cozy courtyard at the Gogol House on Saturday, where from 2 p.m. to 8 p.m. there will be multiple events: a non-stop concert program, master-classes and cool creative art-theater-painting activities, not to mention a fair and coffee bar for exhausted parents. Check out the offerings in Russian at: domgogolya.ru.

The big fireworks display will be held on Saturday night at 10:30 p.m., launched from 12 hilltops and 19 parks. The spectacular show will be capped with a giant cake made of balloons floating off into the night.