The allure of the Silk Road has enticed travelers for centuries and its isolation continues to conjure visions of exotic romance.

These ancient lands are surprisingly accessible from Moscow, and touring a small part of the Silk Road — from Tashkent to Samarkand — is deceptively easy.

Modern technology and investment in infrastructure means that the previously long and arduous journey can now be enjoyed over a long weekend — offering travelers short on time an adventurous holiday beyond their wildest dreams.

For the majority of travelers, the route begins in Tashkent, the capital of Uzbekistan.

The city has unfairly been relegated as a second-tier destination, overlooked in favor of the neighboring Uzbek cities of Bukhara and Samarkand.

The ancient architecture that has brought fame to neighboring cities was destroyed in Tashkent in two swift blows: a major earthquake in 1966, and the resultant influx of Soviet architects. The city's sights can be seen in just a few hours, but the capital's relaxed pace and friendly locals make it the perfect place to spend a day getting to grips with Uzbek culture — especially if that entails relaxing in the sunshine while sampling mouth-watering Uzbek cuisine.

A precious few architectural gems remain, and any trip to see them is best combined with a visit to the Chorsu bazaar. Both the Khoja Ahrar Vali Mosque and the Kukeldash Madrassa overlook the bustling stalls of the capital's main market. The mosque is closed to tourists, but a guide at the madrassa can walk you through the history of the 16th-century university for a small fee. The university's closed courtyard provides an oasis of calm within the modern city, and a small woodcarving workshop selling souvenirs is nestled beneath the ancient archways.

A picturesque walk starts at the Independence Memorial and continues down to the Amir Timur Square. The leafy, pedestrianized street, called Broadway by the locals, often plays host to artists selling pictures or Soviet knick-knacks.

The street leads onto the majestic Amir Timur square, with a statue of the great man himself in pride of place upon the perfectly manicured central park. The Hotel Uzbekistan dominates the scene, and contains one of the city's few ATMs. The Amir Timur Museum is also on the square, its facade easily recognizable as it is emblazoned on every 1000-som banknote. 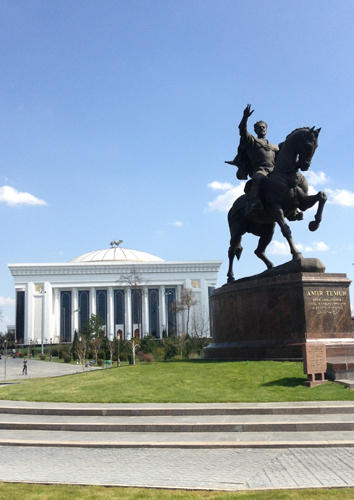 The museum is just one of a collection of glossy new buildings in the city center, predominantly large complexes of white marble and mirrored glass. Those traveling on to Samarkand and Bukhara may prefer to give it a miss — most exhibits feature ancient tiles which have been picked off buildings — but for others, it provides a concise history of Uzbekistan within a beautiful, light and airy building. Sadly, the museum's Islam Karimov exhibition — dedicated to Uzbekistan's great leader — has now closed.

These shiny new building complexes are President Islam Karimov's future legacy. The leader's presence is a subtle one. His image may not stare down at you while you walk through the new, perfectly manicured parks, but his presence permeates Tashkent life. No museum exhibition lacks a quote from him expounding on subjects, and photographs of him hang in offices.

Our friends in the city live peacefully, but when online discussions with friends in the West turn to Uzbek elections, or other sensitive subjects, they can find their Internet disconnected without warning for several days.

The only other sign of Uzbekistan's controversial regime are the policemen posted, quite literally, on every corner. Passports must be carried at all times — a copy isn't sufficient — and visitors will likely be asked to show it, particularly if traveling on the city's largely deserted metro.

No day in Tashkent is complete without sampling traditional Uzbek cuisine. The country's national dishes are famous for their mouthwatering mix of meat and spices, but there is fluffy non bread, sweet black tea and crunchy fresh salads for the non-carnivores. Eating out is cheap when compared to Moscow, and locals are happy to recommend their favorite plov (rice dish) or samsa (meat pastries) in town.

Our favorite was plovsamsa.uz, situated a few streets over from the grand Amir Timur Square. Although their menu lacks variety, they prepare traditional dishes better than anyone else — perfect for dining on their sunny terrace overlooking the park.

For a wider choice of national cuisine in a more up-scale setting, then Caravan is one of the hottest restaurants in the city, positioned on a street replete with capital's most exclusive restaurants. Book ahead of time to make sure you snag a seat, and request a back room table to hear the live band.

If Samarkand is your next destination, you can departTashkent late in the evening — the last train departs from Tashkent after 10 p.m. — or catch a train the following morning. 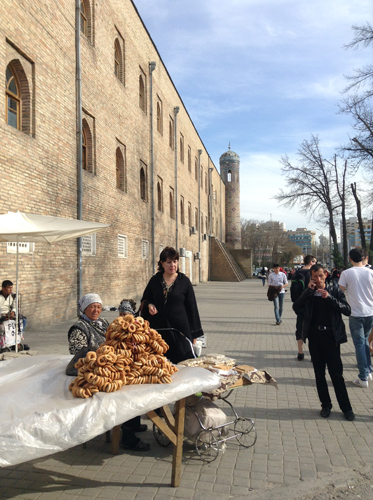 No day in Tashkent is complete without sampling traditional Uzbek food.

Travelers to Samarkand have two option: a slow train that takes four hours, with a second-class ticket costing you $18, or the quicker Afrosiab service — specifically aimed at foreign visitors — that cuts the journey time in half. These tickets cost roughly $25, providing travelers with a plush seat in one of the impressively sleek carriages.

Exploring Samarkand can largely be done on foot as most tourist spots are grouped neatly together in the city center. There are a few sights farther afield — notably the Samarkand Observatory and the Afrosiab Fortress — but neither are worth the trip if you are short on time.

Start your tour at the sapphire facade of the Gur-Emir Mausoleum. Many of the city's best hotels can be found in the small, winding streets surrounding it. The majority are simple, family-run guesthouses, where check-in involves a friendly chat with the owner over a pot of tea.

From the mausoleum, you can walk to The Registan: three intricately decorated madrassas framing a central square, the oldest of which dates back to the 15th century. The site — often lauded as one of the wonders of the Islamic world — is the jewel in Samarkand's tourist crown. Tickets are priced accordingly, there is none of the cheeky haggling which can be used at other tourist sites. Foreigners pay 18,000 som ($7) for entrance, a fair amount, but far more than anywhere else.

The money is well spent. Bombarded by the bright, tiled patterns of the imposing main plaza, you step through into the quiet serenity at the heart of the madrassas, a single tree planted at the heart of each.

The absolute calm is shattered by souvenir stalls crowded into every nook and alcove. The Registan holds some of Samarkand's main attractions and main annoyances within its walls. Tourist numbers remain low, allowing visitors a freedom of movement often lacking in major tourist spots. For a small fee, visitors can even climb one of the Registan's minarets for a breathtaking view across the city.

Unfortunately, the city has not mastered how best to handle the increase in visitors. Souvenir stands, for example, often damage the magnificent old buildings. The beauty of the Registan is testament to the potential Uzbekistan has as a travel destination, but the country's journey to becoming a tourist-friendly destination is set to be a long one.

More and more people have discovered the unique beauty that Uzbekistan has to offer. The country's expansive cultural legacy, combined with genuinely friendly locals and beautiful weather, more than makes up for the long journey from Europe.  For the first time in Uzbekistan's history, for those who crave the road less traveled, time may be running out.

Flights from Moscow's Domodedovo Airport to Tashkent leave daily with Uzbekistan Airways, with a journey time of four hours.  An economy ticket costs about $350 return.