By Sasha Raspopina for The Calvert Journal.

Back in April, the hottest topic in the Russian media and blogosphere was the news that the controversial director Nikita Mikhalkov and his brother, the director Andrei Konchalovsky, had applied for government funding of nearly a billion rubles ($16.5 million) to open a fast food chain that would be a healthier Russian alternative to McDonald's. When the news hit Facebook and Twitter, a steady stream of columns and posts fulminated over the fact that two very wealthy brothers were asking the state for a billion rubles for a commercial venture. Reports from the Kremlin since say that the news reports were wrong, and that the brothers weren't actually trying to borrow money from the budget but were looking to get support otherwise. These new reports proved useless as the op-eds were already out and a train of public outrage had built up an unstoppable head of steam. 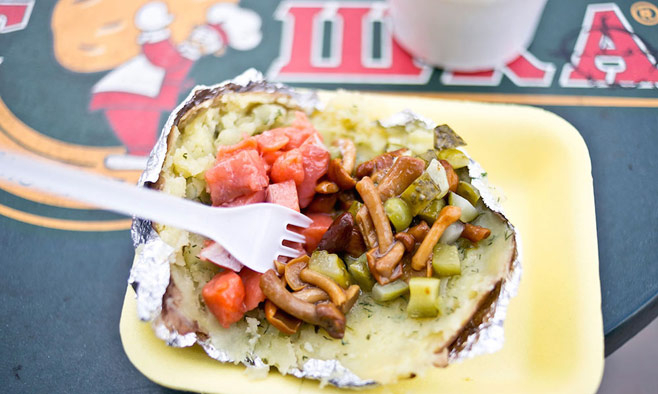 A Kroshka Kartoshka baked potato with a "traditional" Russian filling.

And as for their proposed fast food chain, it was supposed to work under the Edim Doma franchise ("We're Eating at Home" in Russian), a cooking TV show and brand owned by Konchalovsky's wife, Yulia Vysotskaya — an announcement that caused many commenters to blame the director brothers of nepotism. The basic concept of this proposed business is a healthier, more culturally native Russian fast food, everything McDonald's isn't — not exactly an evil idea. Only, their proposal and request for help from the state implied that these things don't already exist, that the niche of Russian fast food is empty and there is no one to stand up to the evil globalized McDonald's — and that is not entirely true. In fact, there have been several attempts at creating fast-food brands with a national identity, some have failed miserably but others still work. 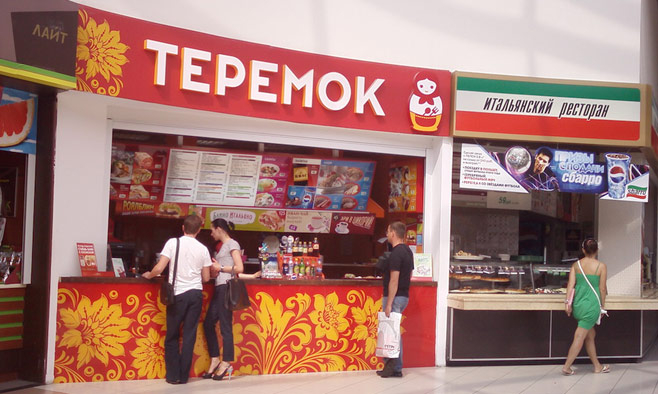 Brateevsky under a CC licence

A kiosk of Teremok, a chain that claims to serve "traditional" Russian dishes in the form of fast-food.

First, there was BlinDonalds, a fast-food chain built around the idea of good Russian food, with the name shamelessly ripped from McDonald's. It was owned by a company belonging to Yevgeny Prigozhin, reportedly a close friend of President Vladimir Putin. The chain, widely criticized for cheap food processed to the point of tastelessness, existed for several years before going out of business in 2012. Then there is Teremok, originally a chain of kiosks selling blini (crepes with fillings) that grew into a successful chain of fast-food cafes serving simple Russian and Soviet food. 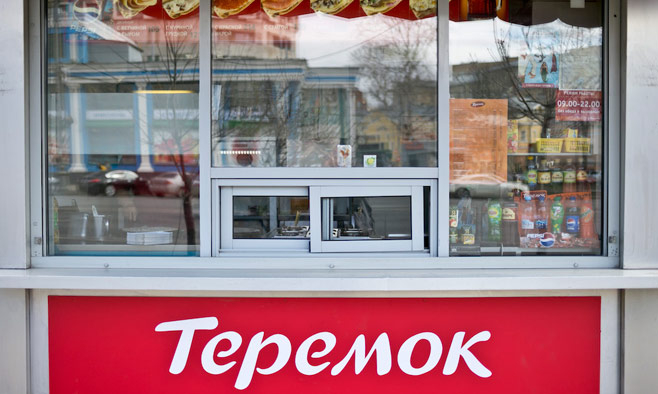 Teremok chain also runs outdoor kiosks than can be found around the city.

The company made some good choices, like serving food appropriate for Orthodox Lent all year round (which means vegetarian-friendly, which the Russian McDonald's still hasn't become) and keeping the prices low. Among other brands are Chainaya Lozhka, Yolki-Palki, and Kroshka Kartoshka — less popular and mostly regarded as train station food, but still managing to survive and open new cafes. These places all have various degrees of Russianness, from the very subtle in Kroshka Kartoshka to the sometimes absurd in Teremok where, for some time, the staff were required to address guests as sudar and sudarina, pre-revolutionary honorific titles that made every contact with a customer hysterically awkward. 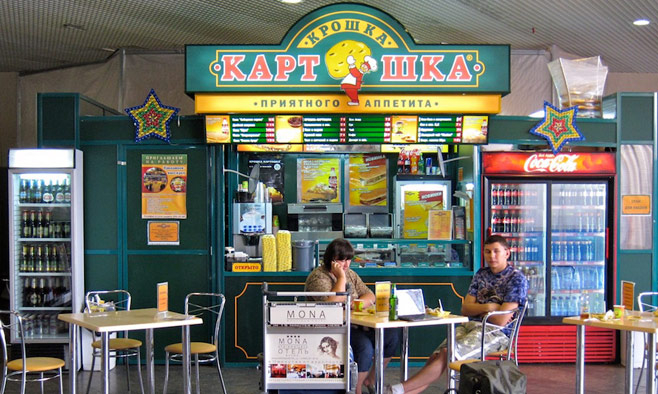 Werz under a CC licence

A Kroshka Kartoshka stand offering several types of beer along with potato-based meals.

Fast-food joints aside, the trend for native food also manifested itself in a more exclusive hipster space of street food markets and restaurants, where pre-Soviet food made its claim for fame through Yamal venison and Siberian fish.

But still, in every instance, whether it is cheap fast food or overpriced street food, both the product and the concept sold to us seem artificial and awkward compared to burgers, kebabs and spicy chicken wings. And it's not the artificiality and awkwardness of eating an artisan hot dog and feeling like a character out of a New Yorker comment piece or one of the horsemen of the gentrification apocalypse. It's the artificiality and awkwardness that come from a cultural void of being sold a piece of food that doesn't bring the promised meaning: this is not "our" native fast/street food, this is a piece of local meat in a burger bun of globalization. What it brings to the national food industry is not "native fast food," just some slightly localized recipes of Western fast food. 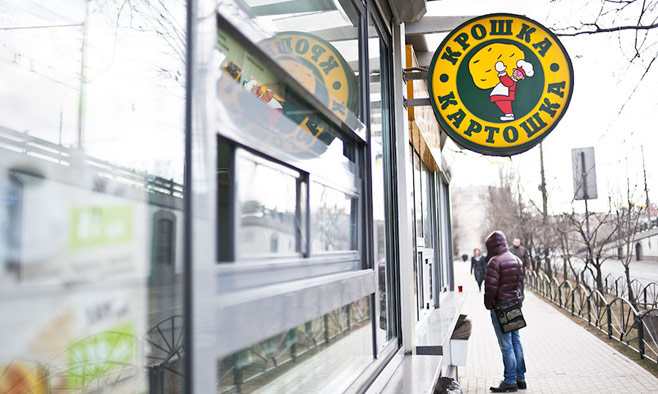 At the same time, there is a whole culture of already existing street food that is popular and native if not to Russia specifically then to the post-Soviet space generally: food based on Caucasian and Georgian cuisines: shashliks and kababi (different types of kebab meat); shaurma or shaverma (shawarma or doner wraps); khachapuri (cheese filled pies); and chebureki (fried flat pastries with meat or cheese and herbs). These foods have a history of being sold and eaten in the Russian streets, and because of the Soviet Union they have been here for so long, they come off as "ours." These foods are handy to eat while you walk, and most people in Russia will probably have memories of them that make these foods a part of our lives: like eating a hot khachapuri, flaky puff pastry with hot melted cheese inside, in a park with one's parents, or sneakily having a shaverma with a friend after school, knowing it will spoil your appetite for dinner later. These foods are what burgers and hot dogs are to most Americans — where they eat hot dogs on the 4th of July, Russians get out of the city for the May holidays to grill shashliks. It helps that Georgian and Caucasian cuisines are generally recognized as the most delicious foods to come out of the Soviet Union, with more flavor and variety than other post-Soviet dishes. The Washington Post recently predicted Georgian cuisine would be the next big thing in the West. 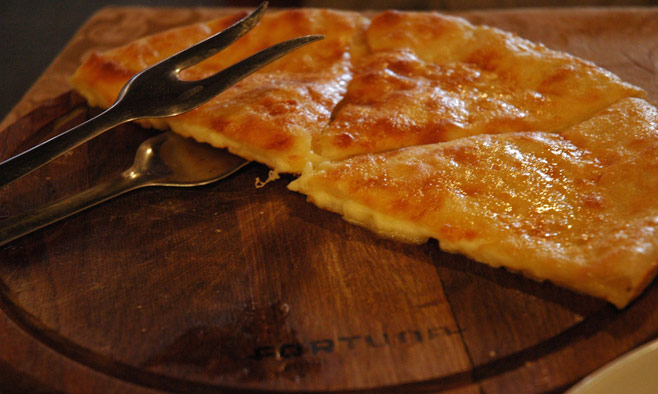 Mussels under a CC licence

A half of khachapuri, a traditional Georgian dish of cheese-filled bread.

However, the business of these foods is rather marginalized and there are very few recognizable brands — most shawarma and khachapuris are sold in kiosks or small cafes where you have to eat while standing up. Some of these places look suspicious and not exactly clean, the kind of place you might not go inside unless you have a recommendation from a friend who assured you won't be poisoned. But some bigger businesses have already started to recognize the potential and the dormant powers of these foods. A chain of Georgian fast-food cafes called Vai Me ("Why Me" in English) serve simple Georgian foods like khinkali (giant meat dumplings) and lobio (bean-based pate, usually eaten with lavash bread), affordable and fast, in three locations in central Moscow. They also recently announced that they have plans for a cafe in Budapest, the new hipster Mecca that has thrown Berlin off the top of the European cool list, so it's safe to say that their claim to foodie fame is a serious one. Other businesses in the know of the trend are the countless Ossetian pie delivery services — easily outnumbering pizza deliveries and offering a variety of pies with fillings of cheese, meat and leafy greens, originating form Ossetia, a region in Georgia. To stand up to the competition, some pizza companies even started to add Ossetian pies to their menus. 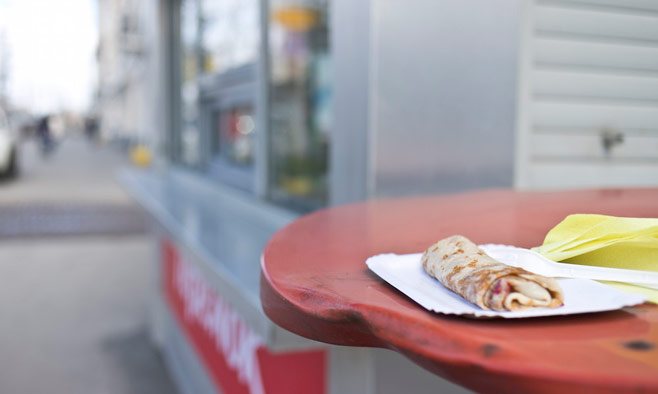 A fast-food blin with berries served in one of Teremok's kiosks.

So does Russia need another fast food attempting to address our cultural identity via borshchs and blinis? Perhaps, for the competition's sake — though not funded by the state. And unless some marketing genius magically rebrands borshch, it's not going to become a go-to fast/street food dish in Russia. What we really need is a less marginalized version of the foods we are used to, the shashliks and shavermas. Even if they are not exactly directly native to Russian culture, we probably have the Soviet concept of the peoples' friendship to thank for the delight we feel every time we bite into a piece of Adjarian khachapuri.