One of Russia's most remarkable festivals, the land art event Archstoyanie, celebrates its 10th anniversary this weekend.

The festival was set up by artist Nikolai Polissky, who moved away from Moscow to live in the beautiful, if remote, area of a national park in the Kaluga region. Archstoyanie has music, locally sourced and grown food, but most important — weird, captivating objects.

Each year Polissky and some of Russia's best architects and artists create fascinating, bizarre, alluring objects using local materials. Among the highlights over the years have been a wooden volcano that spouted fire, a gigantic wooden ear that you can climb inside and get a perfect view of the Ugra River and a special path which also worked as a giant trampoline.

Some of the objects were then ceremoniously set on fire at pre-Lenten Maslenitsa celebrations, but most remain, meaning that after nine festivals, the grounds are full of wooden objects that make it worth visiting at any time of year.

Writing about Polissky's work on display, the ArchDaily website wrote last week that "anchored to a spectacular landscape, they act as lighthouses, inviting the community to occupy a vast territory that seemed impossible to completely inhabit."

Polissky moved to the small village of Nikola-Lenivets more than 20 years ago.

"I was looking for a beautiful place, a place for work and a dacha for the family," Polissky said in 2006, the year when the festival began. "It simply astounded me. I haven't seen anything [like it] so close to Moscow, here is a river and a high river bank and a church — a singular beauty."

Polissky has always worked with locals to create his own unique works, calling it "art that goes to the people." The first major work was "Snowmen," a grand, surreal army of 300 figures that were built with the help of the locals.

The photos of the snowman army caused a stir in Moscow, and other snowman armies took up residence in Moscow periodically, memorably taking over Arbat a few years later.

This year the festival focuses on the nearby village of Zvizzhi, which like Nikola-Lenivets has seen its population fall and almost all of its life ebb away.

Residents were initially wary, Archstoyanie curator Yulia Bychkova told The Moscow Times, but after a series of meetings, they "all agreed in the end."

One of the highlights in Zvizzhi will be a 70-meter-long table where people will gather to talk and eat and drink, said Bychkova.

Four new objects will go up for the festival, all of them focused on the village. 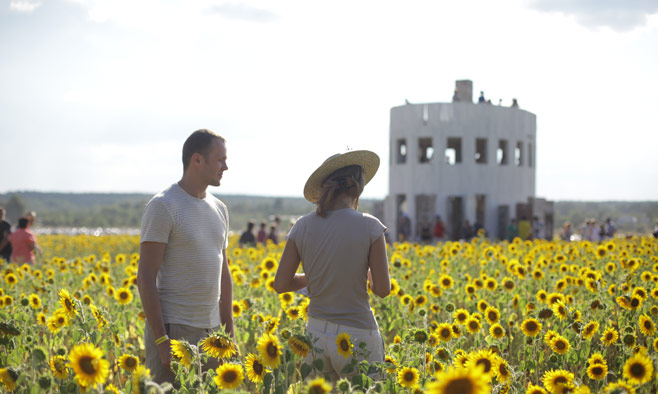 One object created by Polissky will transform the ruins of an old Soviet shop in the village into an art object using wooden blocks, which will turn it into something resembling "a lost church of an ancient civilization," according to the festival website.

An art piece will go up at the local bus stop, where the village youth hang out. This will make it a place for contemplation about the simplicity of life without material wealth, inspired by the Greek philosopher Diogenes, who supposedly lived in a barrel.

Another creation involving huge steel strings will create a harp on the old Soviet shop. The Archstoyanie website enigmatically notes that it will follow science fiction writer Arthur C. Clarke's third law: "Any sufficiently advanced technology is indistinguishable from magic."

Archstoyanie in recent years has grown bigger and bigger. This year the festival is expecting 8,000 people, who will come to wander the beautiful landscape and watch the two stages. The main stage will have an eclectic — like nearly everything at Archstoyanie — selection of musicians, including Swedish indie pop duet JJ; Torn Hawk from the United States, whose beats sound as if they were programmed by William Burroughs, according to Pitchfork website; and France's High Wolf, whose website says he can find the "tones most conducive to inducing transcendental states."

Poema Theater, a group that mixes contemporary dance, physical theater and Japanese butoh dance, will stage an open-air performance during the festival, which will also have lots of events on for children, lectures, and places for visitors to try food prepared by local villagers.

Ahead of the event, the festival has launched a crowdfunding campaign to raise money to transform the village shop for Polissky's artwork. Last week they had raised 683,000 of the 1 million rubles they were looking to get.

"Crowdfunding fits better into the idea of the festival," said Bychkova, noting that the festival is about cooperation and working together.