A fluorescent light filament on a stand. Beside it — an identical filament, shattered. A photo of an inkpot. Beside it — the same inkpot, now shattered, its black contents staining the white canvas. A vertical black line. Next to it — a diagonal streak of splattered paint.

These objects and artworks at artist Valery Yurlov's one-man exhibition "Forms in Pairs" are what he calls "para-forms": an object simultaneously depicted in its original and an altered form. This is Yurlov's way of revealing what art critic Herman Todorov called "the unseen links between the past and the present (or the present and the future)." The concept of para-forms occurred to Yurov when he was 30 years old on a beach in the Caucasus and suddenly imagined what a discarded jam jar once looked like. This concept remained a predominant theme in Yurlov's artwork for the next 50 years.

Yurlov, one of the pioneers of Soviet abstract art, was born in 1932 in Almaty, Kazakhstan. Considered a "non-conformist" artist — that is, an artist who did not paint according to the norms of socialist realism — Yurlov dedicated his life to producing abstract art of the type expressly forbidden by the Soviet state.

As a boy, Yurlov had classical and rigorous art training, although some of his practical work was slightly strange. His mother, a doctor, took him to morgues, where he sketched dead bodies. Later he studied at Moscow's Polygraphic Institute under pre-revolutionary avant-garde legend Petr Miturich, a protege of the renowned Kazimir Malevich. Miturich and other mentors taught him to unlearn his classical training. "When I arrived at the institute," Yurlov recounted, "[my teachers] took one look at my work and told me to throw it out and start from zero." It was then that they inspired in the young Yurlov a love for abstract forms.

By the time Yurlov graduated from art school in the mid-1950s, it was dangerous for artists to openly exhibit works that deviated from state-sanctioned socialist realism. Yurlov's peers who crossed the line drew the ire of the authorities. Many were stripped of their studios and expelled from their institutes. Some were sent to the Soviet Union's notorious psychiatric prison hospitals. Some were sent to the camps. Some were executed. Many of Yurlov's artist friends were eventually driven to suicide.

Yurlov had one show at his institute in 1953 of works that were more abstract than realistic. After that, he relegated his abstract act to a private pursuit and made a modest living editing art journals and doing illustrations for books. But he managed to slip some of his para-forms under the radar of censors. One of his illustrations for a biography of Cicero shows a man standing by a tree, while under him is his double, a buried corpse. 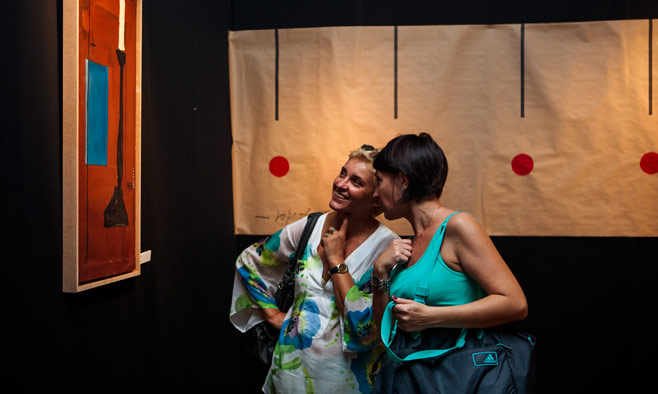 Only after the collapse of the Soviet Union did Yurlov have his first exhibition in Russia, at the prestigious Tretyakov Gallery. Yurlov subsequently lived in New York for nine years, where his work was exhibited among collections of Russian underground abstract art.

The "Forms in Pairs" exhibition shows works produced by Yurlov during decades of creating in the Soviet underground. Some were made with "found materials" — cupboard doors, sheets of scrap metal, planks of wood — whatever could be used when artists had little access to high-quality materials.

Once, Yurlov recalled, he met an alcoholic in a shop by chance. "The alcoholic said, 'Oh, you're an artist? Let me get you some paint.'" Yurlov, well aware that paint was an expensive resource, agreed. "The next day, the alcoholic came back with a big case. 'Look,' he said. 'I got you some cadmium!' It was very red! So I bought him two or three liters of vodka." Yurlov still does not know how the man had procured the cadmium.

Another installation at the exhibition is a screen playing a sequence of point-of-view videos of Yurlov sketching "mirrorless self-portraits," paintings of his torso from his own top-down perspective.

These are the only self-portraits in the exhibition, since Yurlov finds traditional self-portraits to be inadequate. For example, he cites Rembrandt's portraits as "simply showing him as he is. But they should show him depicted as a child, and then as an old man — not just as an old man."

Later Yurlov pulled an old brochure off the shelf and opened it to a photograph of himself taken two decades earlier. Young Yurlov, as handsome as a movie star, stares off into the distance from the pages of the brochure, held in the wrinkled hands of old Yurlov. And unintentionally, a new para-form self-portrait is born.