When a 13-year-old asks her family for a few bottles of wine, it's a party, not a painting, which may well first come to mind. But in the case of Moldovan art student Alina Aghenia, the reason was, indeed, the latter.

"At first my family couldn't understand how it is possible to paint with wine," recounted Aghenia, who comes from a family of winemakers in the vineyard-rich former Soviet republic of Moldova. "Now, they encourage me to keep at it because wine is a symbol of our country."

And it is a readily available symbol that the state-run Calarasi School of the Arts believes should be put to creative use like any oil or gouache. Since 2009, the institution, located in the center of this tiny agricultural country, wedged between Romania and Ukraine, has offered painting with wine, a medium it deems akin to watercolors, as an elective for its 320 students. It is the only school in Moldova to teach the technique.

Some students say that, at first, they thought it was a joke when told they would learn to paint with an "alcoholic beverage."

But 37-year-old teacher Ana Caraman, with all the drive of an art master, was serious. She drew inspiration for the course from the example of famed Italian wine-painter Elisabetta Rogai, a Florence-based artist who has told reporters she came across the idea after seeing drops of wine fall on a tablecloth.

Caraman herself learned the technique while working in Italy for nine years as a waitress after migrating to escape the frustrations of being paid with "one kilo of peas and overshoes" for her work as an art teacher in Moldova, one of Europe's poorest countries.

She calls wine-painting a "dynamic" form of expression. Within a few months of their creation, pictures painted with wine reinvent themselves. "The texture changes and the colors evolve from red and bright purple to more mature tones of amber, orange and brown," Caraman elaborated.

For her 30-some teenage students, busy experiencing changes in their own lives, that's a quality with which they can relate.

"Each time, depending on the [type of] wine, the hues in the picture are changing and you discover something new always," commented Aghenia.

Others see it as a bit of a mirror.

"Wine reflects me because it has a lively and vivid color, like my personality," opined 13-year-old Mihaela Jacota, as she sprinkled sugar crystals on a copy of Henri Matisse's 1930 "Romanian Blouse" to soak up excess wine. 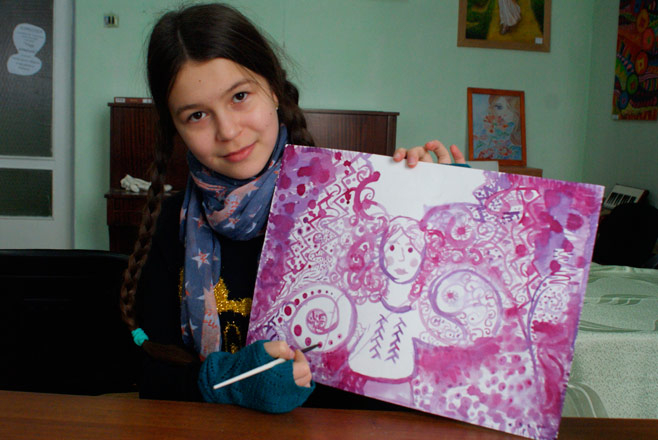 Colors produced by painting with wine often fade to copper over the years.

"Wine can express my self better than coffee," she pinpointed.

Coffee, also taught as a painting technique at Calarasi, appears the domain of "introverts," in Caraman's view, and seems to be favored more by boys. "I do not know the scientific explanation," she added with a smile.

The technique behind painting with wine, however, is a science in itself, and one that these students say was difficult to grasp.

The wine must be dry with no additives or chemical components. Temperature is "the biggest secret." Though mulled, the wine must be applied when "cold, not hot."


While Moldova, which produced 150 million liters of wine in 2013, does not lack supplies for this art form, some established Moldovan artists have their doubts about it becoming a national passion.

"Compared with Chinese ink or sepia, which makes the paintings resist fading, wine is not for lasting works of art," he judged.

Vladimir Lozovanu, a lecturer in painting at the Academy of Music, Theatre and Fine Arts in the Moldovan capital, Chisinau, dismisses painting with wine as "a PR technique."

The technique attracts attention since the gradual changes in wine-paintings' color and tone are "unusual in the arts," he said.

For Caraman, change is the whole purpose.

"A lot has been said in negative contexts about Moldovan wine," she said in reference to a 2014 World Health Organization report that ranked Moldova as the world's second-largest (after Belarus) alcohol consumer, "so we must show that you can do something nice with 'the drink of Bacchus.'"

But Calarasi art student Daniela Emandi needs no convincing. To ensure that she would have sufficient wine for painting, she took part in her first grape-harvest this year.

"I want to learn this technique as well as possible," said Emandi. "I think that this art should be promoted nationally."

Perhaps one day the rest of Moldova will agree.

Editor's note: Victoria Puiu is a journalist who writes for the weekly newspaper Timpul (Times) in Chisinau, Moldova.