Contribute Today
By Oliver Banatvala
May 25, 2015

Multimedia Art Museum currently has a fascinating exhibit dedicated to Robert Capa, one of the most acclaimed war photographers of the 20th century.

The show, featuring 120 photos, journeys between 1936 and 1954 through five different conflicts, the Spanish Civil War, the Second Sino-Japanese War, World War II, the 1948 Arab-Israeli War, and the First Indochina War.

His photos are "a dramatization of human life. … He didn't photograph events, but people," said Judit Hammerstein, the head of the Balassi Institute, the Hungarian government's cultural organization that organized the exhibit as part a Hungarian culture festival, which runs in five Russian cities until June 30.

Capa was born in Budapest in1913 as Endre Friedmann, in what was then the Austro-Hungarian Empire. He moved to Berlin when he was 18, but headed to France in 1933 when the Nazis came to power and Jewish journalists were increasingly persecuted. By then, he was using the name Robert Capa as anti-semitism had stopped him getting work with his real name.

The name's similarity to the great Hollywood director Frank Capra was deliberate, and Capa and his girlfriend, herself an accomplished photographer, would send off work claiming to be the American photographer "Frank Capa." 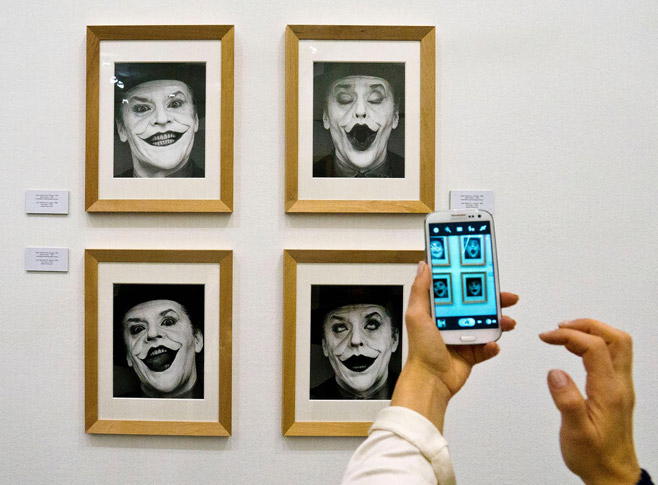 Herb Ritts photos of Jack Nicholson as the Joker from the Batman film.

Capa first rose to fame with his "Falling Soldier" photo from the Spanish Civil War, which shows a combatant at the moment of death, just shot, his head jerking backward and his legs beginning to crumple. The photo was snapped up by LIFE magazine and he became a regular in the world's top magazines. He went on to found the legendary Magnum photo agency in the late 1940s with the likes of Henri Cartier-Bresson.

In the exhibit, photos of children playing with a papier-mache tank in Budapest hang next to those taken in the midst of war, showing soldiers, guns and death. Among all the gore and violence on show there are scenes of happiness, of a tranquility not usually associated with war: A couple rest on a bench in Barcelona the day before evacuation. An American soldier talks to some orphans. An air raid warden and an old lady share evening tea in an air raid shelter.

Perhaps the most harrowing photograph in the exhibit is Capa's shot of a group of mothers receiving the news of the death of their children.

"Capa's photographs in one moment preserve the horror of war, the fear of the survivors," said Hammerstein.

Capa once said about his professional life, "For a war correspondent to miss an invasion is like refusing a date with Lana Turner."

He had vowed to give up war photography but nevertheless went to Vietnam to cover the war between the French colonial forces and Vietnamese independence fighters in 1954. He died after stepping on a land mine and was buried in the United States. 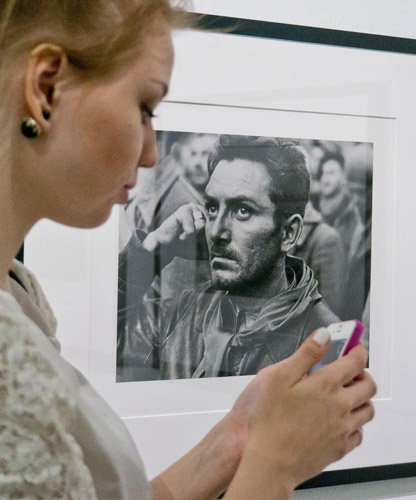 Capa's genius was in showing the effect of war on and off the battlefeld.

The gritty reality of wartime life in Capa's work could not be further from the glitzy, showbiz world of supermodels like Naomi Campbell and stars like Madonna and Cher in Herb Ritts' work, which is also on show at the Multimedia Art Museum in an exhibit called "In Full Light."

Ritts, who died in 2002, was one of the most well-known fashion and celebrity photographers in the 1990s and his work was part of the craze for supermodels, like Campbell and Christy Turlington, at the time.

"Ritts was a photographer who loved and enjoyed very much to be always in full light," said curator Alexandra Mauro, "trying to capture from the light, from the atmosphere, the beauty of nature and the beauty of the human body."

He also directed music videos for Madonna, Michael Jackson and Tina Turner, among others, and the museum shows a montage of three of his videos.

There is also small collection of photos of tribal African life, which contrast strongly with the glitzy shots of celebrity.

These pictures "reflect his vision and passion for life," said Mark McKenna, director of the Herb Ritts fund. The photos on show are "commercial assignments for fashion magazines, or for advertising, but it is still the work of [Ritts'] vision," he said.