Contribute Today
By Raymond Stults
May 21, 2015

Very few travelers, whether foreign or domestic, are likely to go out of their way to visit Novosibirsk, Russia's third-largest city, located some 3,057 kilometers to the east of Moscow in the heart of western Siberia. Founded just over 120 years ago in connection with construction of the Trans-Siberian Railroad, it boasts neither ancient architectural monuments nor outstanding natural surroundings.

Nevertheless, Novosibirsk proudly ranks as one of Russia's most musically well-endowed cities, with a theater of opera and ballet, a symphony orchestra, a conservatory and a ballet school that rival the best to be found anywhere in the country, not only east of the Ural Mountains, but in its western reaches as well.

Last year, a distinguished native son of Novosibirsk, the violinist Vadim Repin, added to the city's musical riches by establishing the Trans-Siberian Art Festival, which over a period of 13 days presented a remarkably impressive array of talent from both Russia and abroad, including Repin himself, of course, Bolshoi Theater prima ballerina Svetlana Zakharova, American conductor Kent Nagano, the English Chamber Orchestra, mezzo-soprano Olga Borodina and French jazz violinist Didier Lockwood.

Despite a hitch at the end, when conductor Valery Gergiev, at the very last moment, seemed to find it more to his advantage to take on an engagement in New York than to lead, as scheduled, the festival's closing concert, the first edition of the Trans-Siberian Art Festival proved a resounding success. Even the closing concert, played without any conductor at all, drew great acclaim.

This year's second festival, at the end of March and beginning of April, stretched in time to 18 days and geographically to the other major urban centers of Western Siberia, Krasnoyarsk and Omsk, the closed nuclear and space-research city of Zheleznogorsk, located 25 miles from Krasnoyarsk, and to Moscow, where French pianist Jean-Yves Thibaudet joined Repin for a concert at the Moscow Philharmonic Society's new hall, Philharmonia-2, in the Olympic Village.

On hand to play and sing at this year's festival were some 600 participants from 16 countries, including 29 soloists, the members of 11 orchestras and ensembles, and six conductors.

The festival's principal orchestra is the Novosibirsk Philharmonic Orchestra, an ensemble long recognized as one of Russia's most accomplished, and its principal venue is the city's splendid new 1,000-seat Concert Hall, named in honor of the orchestra's founder, Arnold Kats, who led the orchestra from 1956 until his death in 2007. Its opening in September 2013 provided the city for the first time ever with a really suitable auditorium for symphonic performances. 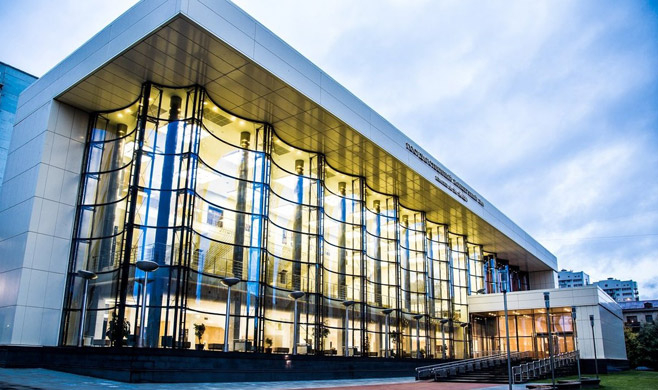 The brand-new concert hall in Novosibirsk named in honor of Arnold Kats.

My first evening at the festival this year was highlighted by a glowing performance of Jean Sibelius' Symphony No. 2 from the Novosibirsk Philharmonic Orchestra, under the baton of its musical director, Lithuanian conductor Gintaras Rinkevicius. Later on, I witnessed the well-known Swiss maestro Charles Dutoit imbue the orchestra, in rehearsal, with a firm grasp of the unfamiliar, to it at least, score of Gustav Mahler's Symphony No. 1. In between, another first-rate regional orchestra, the Ural Philharmonic from Yekaterinburg, led by its brilliant musical director of the past two decades, Dmitry Liss, gave by far the most convincing performance I've ever heard of Pyotr Tchaikovsky's Suite No. 3.

But the high point of my brief stay in Novosibirsk was "Connecting Generations," an evening in which Repin was joined by his famed teacher, Zakhar Bron, and three young pupils of Bron, who after many years of teaching in Novosibirsk — where his pupils included, besides Repin, the equally renowned Maxim Vengerov — and then in Germany and Britain, now heads his own School of Music in Interlaken, Switzerland. The three young violinists, from Japan, Turkey and the United States, all showed considerable promise, and more, in a group of popular short pieces, accompanied by the Novosibirsk Philharmonic Chamber Orchestra, under Bron's direction. But it was Repin and Bron, joining together in Sergei Prokofiev's Sonata for Two Violins, that brought a truly magical touch to the evening.

My visit to Novosibirsk coincided with the uproar surrounding the production of Richard Wagner's opera "Tannhauser" that premiered last December at the city's Theater of Opera and Ballet. All I can say in that regard is that, without exception, everyone I spoke with was truly appalled by the intervention of the local head of the Russian Orthodox Church, who declared the production offensive to the feelings of religious believers and notified the prosecutor's office, which promptly issued a complaint (later dismissed in court) against its director, Timofei Kulyabin, as well as by the subsequent decision of Russian Minister of Culture Vladimir Medinsky to fire the theater's extremely able general director, Boris Mezdrich, and appoint in his place the controversial general director of St. Petersburg's Mikhalovsky Theater, Vladimir Kekhman, who quite possibly may soon face criminal charges in connection with the bankruptcy of his once-successful fruit-importing firm.

See transsiberianfestival.com for more about the Trans-Siberian Arts Festival.