Contribute Today
By Elizaveta Vereykina
May 18, 2015

The market for parking barriers is booming in Moscow as locals move to protect their yards against drivers forced out of the ever-expanding creep of the city's paid street parking.

"Every second call we get these days is from Muscovites in a panic, who want to close their yard from strangers as soon as possible," Yelena Repushkina, the commercial director of barrier retailer FTK, one of many companies that have benefitted immensely from the boom, told The Moscow Times.

After years of road anarchy that saw many use sidewalks as parking lots, in 2013 Moscow began charging for parking. In its first year the scheme was restricted to city's center, but as the program gained steam in August of last year paid parking was extended to the far-flung borders of the Third Ring Road.

While the fees are still small by Western standards — only 40 rubles (81 cents) an hour near the borders of the Third Ring Road and twice as much within the Boulevard Ring — the action is spurring drivers to hunt out free parking in any apartment courtyard handy. And as residents battle to keep them out, companies that sell and install parking barriers are seeing a sales rise.

"Around 120 barriers were installed in Khamovniki in 2014, while in 2013 there were only around 30," said Dmitry Basharov, who as head of the municipal administration of the Moscow central district of Khamovniki is responsible for approving installations.

Many Muscovites seem happy to install the "shlagbaums," or barriers in Russian, a right they gained only in 2013.

Of the 98 apartments in one 14-story apartment block on Chertanovskaya Ulitsa in southern Moscow, 70 voted to install a barrier in their building's courtyard, said Boris, a leader of a volunteer association of residents who declined to give his last name.

"Now everyone here has his personal parking spot, there's no stream of cars bypassing traffic jams and our kids are safe to walk!" he said, adding that there are three parking spots for guests.

Boris, along with all the other residents, pays 800 rubles ($16) for the guard's salary of 30,000 rubles ($611) per month. Some households use cheaper digital dispatcher systems with one person watching several households at the same time.

As Muscovites rush to protect their parking spaces, many companies are seeing sales grow even as the fall of the ruble makes imports more expensive.

Despite prices rising 15 percent on the back of the ruble crisis, sales at the Russian branch of Italian barrier producer CAME rose 10 percent in 2014, said Sergei Yevsikov, sales director at CAME Russia. CAME is one of top barrier makers in Moscow, with around 2,000 dealers across the country.

The ruble's fall has also spurred sales of cheaper domestic brands too, including Fantom, DoorHan and Trud.

The trade down hasn't hurt the company's profits though — the company's income is 40 percent bigger so far this year compared to last. Ironically, Repushkina's office, which specializes in selling the Russian brand Fantom, is guarded by CAME as well. 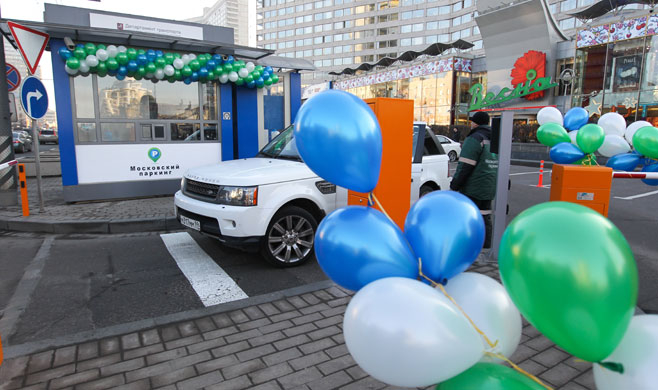 Some Muscovites are even so desperate to put up barriers that they install them without permission from their local government. Sergei Polozov, a City Duma deputy from the Chertanovo district, says he has had to crack down on illegal barriers by complaining to the courts.

Citizens and officials have disputed whether or not it is fair that citizens must pay for the gates themselves.

Basharov told The Moscow Times that last year deputies from his district came up with an initiative for the government to pay for the barriers with the revenue earned from the city's paid parking scheme.

However, they came to conclusion that state funding would be a bad idea: "If we give others money, those who had already paid out of pocket would be angry and demand [that we] pay them as well," Basharov said.

Its not only the parking barrier companies that are profiting off the parking crisis though — as with trade in any rare good, some are finding ways to make money off their access to parking spaces.

Gate key-owners in the central districts of Moscow have begun selling their parking spots to office workers who work on the first floors of their buildings, said Khamovniki's Basharov.

"Very often these are old ladies who don't use cars but own a parking spot and rent the barrier keys for 5,000 rubles ($101) a month," Basharov said. This is a good deal for those who don't want to pay for the official monthly street parking pass, which costs 8,000 rubles ($162).

Similar ads from residents of paid-parking areas can be often seen on the Internet.

Others have leaped on the chance for a little embezzlement. The owners' associations responsible for building upkeep will sometimes promise to buy an expensive gate but buy a cheap one and pocket the difference.

CAME's sales director Yevsikov told The Moscow Times about one case in a Moscow southeastern district of Zhulebino: "The [owners' association] gathered 2,000 rubles ($40) from 500 apartments, claiming they would buy 2 CAME barriers. But [in the end] they ordered cheap ones."

The "shlagbaum" boom in Moscow might be over soon though. There are currently no plans to expand the paid parking zone past the Third Ring Road, Moscow city parking chief Alexander Grivnyak told news agency Interfax in January. However, when the paid parking zone was established within the central Garden Ring in 2013, City Hall promised that it would not expand any further.

Moscow had warned of a "humanitarian crisis" on the Svalbard archipelago after Oslo halted a shipment headed for the islands.
wary eye

Those found guilty of helping foreign individuals or organizations act 'against Russia's interests' will face up to eight years in prison.