A Siberian artist has sold out of special envelopes he created for putting money in to pay bribes after they proved to be an instant hit.

The envelopes, which are decorated with the text of the criminal code article that deals with bribery, sold like hot cakes and were even bought by corrupt bureaucrats themselves, artist Vasily Slonov told The Moscow Times.

Slonov posted photos of the envelopes on his Facebook page Tuesday with the words "Friends, let's make life beautiful. Let's improve the culture of giving bribes," and invited bureaucrats, government officials and businessmen to cooperate with him.

The artist also highlighted parts of the envelope with the words "Your advert could be here," suggesting the Krasnoyarsk city government and the Krasnoyarsk lawyers' chamber as possible advertisers.

"Of course bureaucrats bought them," said Slonov. "But I am not the Investigative Committee, I am an artist."

Slonov printed 100 of the envelopes and sold them for 100 rubles each. "For those who give bribes, that is kopeks," he said.

After selling out, he is printing new ones, some of which will eventually go on sale at Winzavod Contemporary Art Center in Moscow. 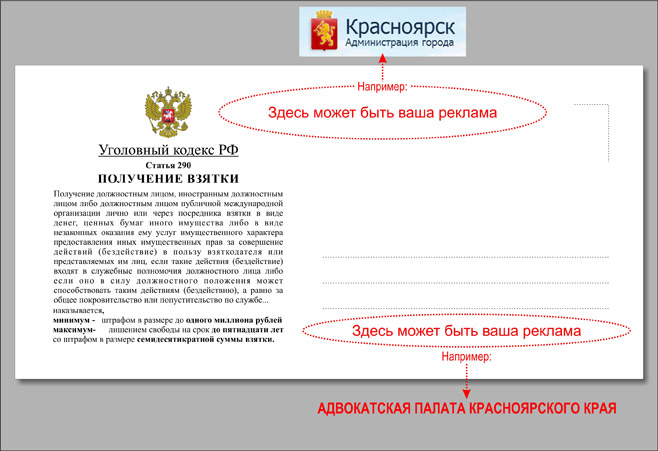 "I don't know where it [the idea] came from, it came from outer space," said Slonov, adding that bribes were an intrinsic part of Russia. "That's our country for you — people are always talking about it."

Slonov is known for his often acid, satirical humor. In 2013, his "Welcome! Sochi 2014" posters caused a stir ahead of the Winter Olympic Games featuring as they did an Olympic mascot in a sex costume, the Olympic rings made out of barbed wire and nooses and a pedestal with a vodka bottle in first place. An exhibit in Perm was closed down after it showed the posters and one local politician called them Russophobic.

A couple of months ago, the artist created an artwork of President Vladimir Putin from U.S. dollars and Russian and Soviet rubles.

Posters on Slonov's Facebook page took the idea in its satirical spirit. One suggested the envelope should be made of elastic, "so that more can be put in, depending on the sum. Up to a billion."

Another wrote: "The envelope is too small. I suggest you think about a special suitcase for bribes."

Asked if he had given any bribes, Slonov said "I cannot tell you as then you would print it and I would be arrested. I will leave my skeletons in the closet."