"Sforza," Sasha Denisova's new play at the Meyerhold Center, suffers from a case of schizophrenia. That becomes especially evident as it reaches its end.

Against a back wall we see flickering images of Stalin and Hitler, while the pounding rhythms of Jefferson Airplane's rousing 1960s hit "Somebody to Love" cascade around us — "Don't you want somebody to love / Don't you need somebody to love …"

What is this, then? A love story or a political tale?

That question is never fully answered, despite the fact that director Alexei Zherebtsov's production takes nearly four hours to reach its conclusion.

Two stories stand at the center of "Sforza" — that of Bianca (Inna Sukhoretskaya) and that of her father, Duke Visconti of Milan (Alexander Userdin). The former is a dreamy, but volatile, girl with love in mind — although only if it comes exactly as she wants it. The latter is struggling to keep the kingdom together.

War, hostility, corruption and repressions have begun to try his personal patience and sap the strength of his government. Milan is in danger.

Enter Francesco Sforza (Andrei Smirnov), a dashing soldier who might save the city if the duke were to give his daughter to him in marriage. Ah, but court intrigue! Where would we be without a bit of subterfuge? After presenting Sforza to Bianca as marriage material, the duke, alas, finds he must renege and put a price on the young man's head.

Meanwhile, a bit of comic relief is provided by the further intrigues of a genius artist named Bonifacio (Mikhail Yefimov) and his acquaintance, the good priest Girolamo (Ilyas Tamayev). Bonifacio we come to recognize as Leonard Da Vinci — not because he invents the electric guitar and impressively runs off Jimi Hendrix riffs, but because he has invented a flying contraption and is ready to show how to use it.

There are, in other words, plenty of tongue-in-cheek shenanigans in "Sforza."

Another takes place as a vision of the future begins acquiring shape. In it a nasty red king lives in a red castle in the middle of a red city. Oh where and what could this possibly be? Then comes the punch line: "Beware, the doors are closing. Next stop, Krasniye Vorota (Red Gates)." 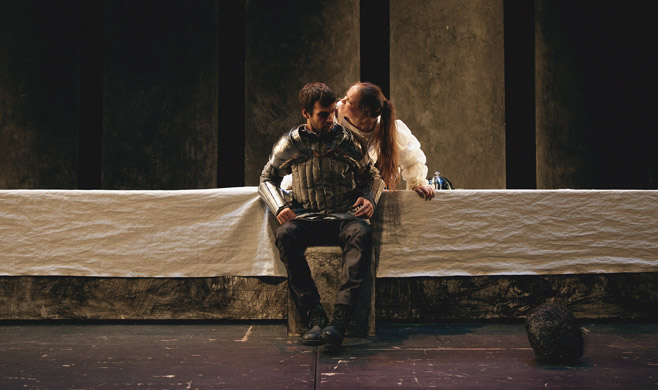 For those of you not entirely familiar with Moscow, Krasniye Vorota is a metro stop — on the red line, by the way — northeast of the Kremlin.

Other attempts at playing with humorous time warps, with a little politics thrown in, include the duke's big speech about returning Milan to its tried and true cultural traditions. It sounds like Denisova may just have lifted a few phrases from Russia's current minister of culture, Vladimir Medinsky.

"We doubt what is sacred to us," the duke intones, "and we forget what our great nation is founded on."

Userdin, like most in this production, plays his role with a fat dose of deep ennui and disconnect. It is as if nothing concerns him at all — neither death nor life — and the only task he really has is to get on with things and be done with them.

In case we missed the references, costume designer Maria Chernyshova dressed Userdin in a combination Mao-Stalin jacket. Designer Alexander Arefyev placed all the action in a faux stone castle.

One of the production's finest moments comes as Arina Marakulina, playing the out-of-favor Duchess Beatrice, laments the role that love has played in her life. Alone at a long banquet table that soon will be filled with half-bored revelers, this scheming, covetous character unexpectedly reveals a depth of humanity and experience that no one else provides.

Another highlight is Yefimov on the guitar leading a live band of quite capable rockers through several anthemic rock songs. Sukhoretskaya does a fine imitation of Grace Slick in that final, rocking blast.

On the whole, however, "Sforza" emerges as a very long, disjointed collection of scenes. The concerted efforts of the cast to put across disinterest as the epitome of cool rarely succeed. Denisova's purposefully simplistic text make the politics of "Sforza" sound banal, while the love scenes, not lacking in occasional cuteness, seem to have been drawn from an Internet site of stock romantic situations.