This article was originally published by The Guardian New East Network

Is the moniker "Putin's official DJ" a sought-after crown or the kiss of death for an electronic musician living in Russia?

Those wondering should keep any eye on the career of DJ Fenix, recently afforded the title after becoming the first person ever to DJ at the Kremlin.

Fenix, real name Alex Mamonov, says his booking came about after the Musicbox Awards, which celebrates music in the post-Soviet states, asked him to create an anthem for the event. He didn't personally see president Vladimir Putin in the audience that night, "but he very well might have been" there.

The gig, which took place at the huge Kremlin Palace venue in November, was not the first time Mamonov has spun tracks for members of the Russian government. He was on the bill for Putin's second inauguration and is reported to have played private gigs for the prime minister, Dmitry Medvedev.

Mamonov, who was recently named "Russia's most eligible bachelor" by Cosmopolitan magazine, is popular among Moscow's elite. When asked, he is reluctant to divulge any information about who makes up this exclusive fan club.

He admits some members are political, but that the "circle of people is very big." His manager, Rostik Rusev, chips in to say, "he plays for the elite [In Russia], let's just hope he can play for the elite everywhere."

Russia's elite clubbers have almost become the stuff of legends. After a night on Stalin's yacht partying with an "indescribably wealthy few," Vanity Fair once said that Moscow's scene "makes every other city's look tame."

The Daily Beast said that "knowing the right people — or having the right look — can get you into the most exclusive of spots" and Vice once claimed that "the concept of the VIP has become a national obsession." There is even an Estonian vodka called Russian Billionaire Elite Club.

Mamonov prefers to talk about electronic dance music, otherwise know as EDM, a catch-all term for the commercial dance scene. EDM has captured the imagination of the American mainstream, making it one of the most lucrative sectors in the music industry.

Mamonov says in Russia the "EDM boom is happening very quickly." He describes the term, disliked by some DJs for glossing over the nuances in the scene, as "a new word for dance music" or "big room house." The country has long been a stop-off for dance acts touring the globe. 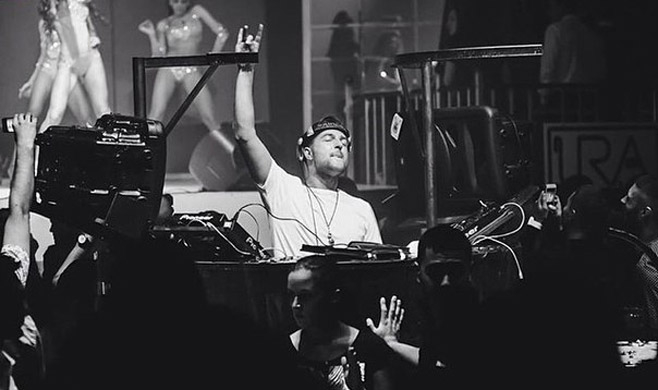 Daily Beast wrote that Fenix, real name Alex Mamonov, is the son of a high-ranking member of the Federal Security Service.

Mamonov credits KaZantip, a month-long rave on the Black Sea, for establishing the scene in the region. The Ukrainian festival, which has been held on the Crimean peninsula since 1992, was relocated to Georgia last year due to the ongoing conflict in the region.

Acts like Deadmau5, Tiesto and Skrillex are also popular. Skrillex headlined Alfa Future People, a relatively new Russian EDM festival, in 2014, a slot Mamonov has his sights on this year. "I will be headliner or something" he says.

Zedd, real name Anton Zaslavsky, is perhaps the best known EDM DJ from Russia, although he moved to Germany at the age of three. The DJ and producer has worked with everyone from the Black Eyed Peas to Justin Bieber.

EDM sets are renowned for light shows and stage effects specially crafted to fit the tracks. Experts in the field include Deadmau5 identified by his mouse silhouette and Skrillex, infamous for his dramatic entries like descending onto stage at Glastonbury Festival by spaceship.

Mamonov has fully adopted the EDM approach. He likes special effects, including Co2 cryogenics "if it's an open stage" and says he wants his audience to "connect with the idea of Fenix rising from fire" through his stage shows.

This stage show (minus the cryogenics) was in full effect at the Kremlin gig. A YouTube video sees DJ Fenix on stage blaring out his beats, surrounded by strobe lighting and scantily clad singers — a new look for a stage which has previously hosted the Bolshoi Ballet and Stravinsky.

The video cuts to members of the audience looking stoney faced, but Mamonov insists that was not representative of the whole audience. "I see some people who don't understand my music, and people who like it and start to dance," he said.

Mamonov describes his booking as "good for EDM" and a way of bringing the music to "a very old, very beautiful building." He wouldn't say who booked him but would like to think that it was because of his music rather than his politics.

The government connection doesn't seem to have done any harm to his career so far. Mamonov, who has played in clubs from New York to Ibiza, says the offers are flooding in and predicts that other Russian EDM artists will cross over into the national mainstream soon.

Both Mamonov and his manager Rusev are critical of Spotify's recent decision to cancel plans to expand in Russia. The streaming giant cited "the economic crisis, the political situation, the new laws governing the Internet."

Rusev says that this is one of the reasons that DJ Fenix is now based between New York and Moscow as he tries to build his global brand.

Mamonov says he wants to hit the whole world, "it's just Russia will get my music separately" through gigs, rather than streaming and downloads. "I still love my fans, my fans in Russia. I have a big big crown here, in Ukraine, in Belarus too," he adds.

As for the title, "Putin's official DJ" Mamonov claims he doesn't need it as he is already recognized for his music. He'd prefer to belong to the "new generation of EDM," and Rusev likes "Russia's most eligible bachelor."