The Anti-Maidan leadership said Monday that the organization is prepared to pay fines if more than the permitted 10,000 people show up to a march in Moscow on Saturday, the Vzglyad newspaper reported.

The pro-Kremlin march is being held in opposition to the pro-Western government that took power in Ukraine last year through the so-called Maidan protests in central Kiev.

"We applied for 10,000 people, but today we know that more than 100 organizations will join the Anti-Maidan movement," Dmitry Sablin, a senator in the Federation Council's defense committee, reportedly told a news conference hosted by state news agency TASS.

The movement, which accuses the United States of having aided the Maidan protest movement and the ouster of Ukraine's previous pro-Russian president, is currently hosting an outdoor photo exhibition titled "The Face of American Democracy" on Pushkin Square in central Moscow. The exhibition shows violent photos from the Vietnam War and other conflicts in which the United States has intervened militarily.

The Anti-Maidan organization was formed in mid-January with the stated aim of preventing a Maidan-style popular uprising in Russia. Other prominent members include the head of the Night Wolves biker gang, Alexander Zaldostanov, aka The Surgeon, who was recently sanctioned by the United States, and female mixed martial arts fighting champion Yulia Berezikova. 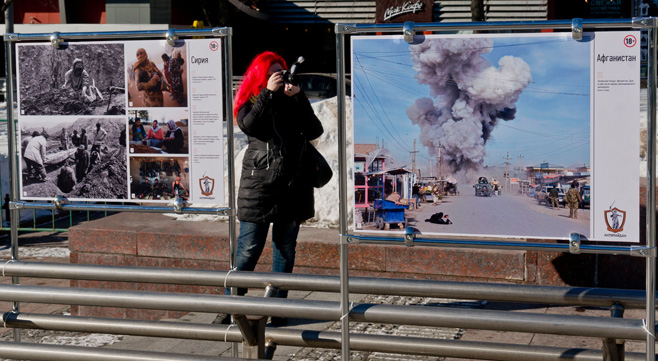 A woman taking photos Monday at Anti-Maidan’s exhibit on Pushkin Square, “The Face of American Democracy.”

Anti-Maidan is also renting about 120 billboards around Moscow to promote the march, the RBC news agency reported, citing a source at advertising company Russ Outdoor. Such billboards cost about $640 each to rent for two weeks, meaning the ads' total cost was some $76,800, according to the report.

The march is titled: "A Year Since Maidan. We Won't Forget! We Won't Forgive!" It will begin on Saturday at noon at the intersection of Strastnoi Bulvar and Ulitsa Pokrovka in the city center.

A week later — on Sunday, March 1 — opposition leader Alexei Navalny plans to hold a march of 10 times as many people down Tverskaya Ulitsa, Moscow's main street. Navalny and an associate, Nikolai Lyaskin, were detained by police on Sunday as they handed out fliers for the march at a Moscow metro station.

Lyaskin said Monday on Twitter that a formal application to conduct the march, titled "Spring," had been submitted to City Hall. It is against the law to hold public rallies in Moscow without prior consent by the city authorities.

Moscow authorities have granted permission to pro-Kremlin demonstrators to hold an Anti-Maidan rally in the city center on Feb. 21.
denying shortages