The three subjects of the State Museum of Oriental Art's latest exhibition, "Tea, Wine and Poetry" may not seem at first glance very compatible, but one visit will convince you of the eternal nature of the three in the development of the East.

Hundreds of different drinking vessels from China, Japan, the Caucasus and Central Asia are on display, telling their own story of the relevant country's drinking culture and traditions.

Ancient scrolls hang from the walls of the exhibition as reminders of the origins of poetry in Eastern culture, while fantastic sculptures decorate the glass cases of the halls. One sculpture features the sinister figure of Kui-Xing, servant of the ancient Chinese god of literature, Weng Chang.

"The main idea of the exhibition is to explore the ideas and symbols that united the peoples of Asia," said Tigran Mkrtychev, one of curators of the exhibition. "Tea, wine and poetry are different subjects, but they all cooperate and the thing that they have in common is the ability to make space. They unite people of different languages and cultures."

"Tea, Wine and Poetry" encapsulates all these themes into a brilliant array of beauty and elegance.

"Tea, wine and poetry have existed throughout history, despite the fact that nations and peoples have died out and been replaced by others," said Mkrtychev.

The sculptures are examples of how tea, wine and poetry directly influenced the arts and cultures of Asian countries. Many well-known artists from Central Asia used the ritual of tea drinking in their paintings, and the paintings in the exhibition are testament to that.

Wine was invented earlier than tea, meaning that Asian drinking customs were based on that initially and already centered on sitting around a table and drinking.

"So when tea came about, it nicely fit the settled existing wine-drinking traditions. It doesn't mean that people stopped drinking wine but tea had now kind of taken over and become more popular. It was then that tea started to be spread across the world."

The exhibition also emphasizes the influence of Eastern tea, wine and poetry all over the globe. 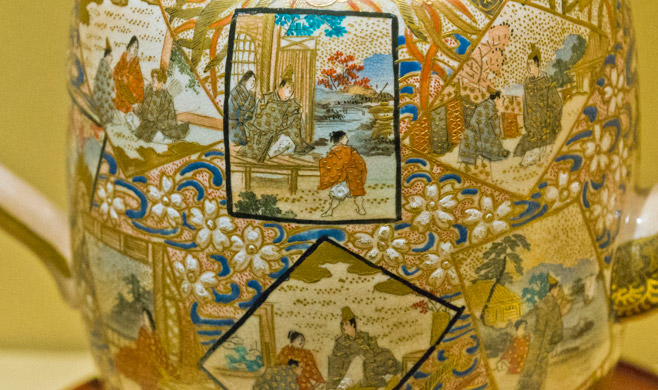 Thanks to the Silk Road, tea, wine and poetry spread like wildfire and trade was a two-way system.

"We know that tea was invented in China, but we also know about the famous tea-drinking culture in England. In China, there was no great wine, only wine produced by flowers, plants and other foods," said Mkrtychev, "The wine that was drunk in China is a product of Western civilization. This shows the cooperation between different countries and cultures and traditions."

Mkrtychev reiterated how China had a huge influence over European culture, especially in terms of fashion, but that the European influence on China and Asia cannot be underestimated either.

"We can still enjoy some antique items relating to wine and tea. Now it can be seen that ancient culture manifests itself in our culture today. … It's impossible to imagine old Russia without the tea shops, just like Central Asia."

Yermakova also pointed out how there are a growing number of Chinese tea shops in Moscow, where tea ceremonies are enacted.

"In Moscow, you will find even stricter ceremonies than the Chinese ones," she said.

Tea, wine and poetry have always played a central role in global culture, and the many goblets and drinking vessels on display at the State Museum of Oriental Art are clear examples of this proposal. The beautiful paintings, sculptures and poetry are the museum's way of showing how tea, wine and poetry from China to the Caucasus have been the cornerstones of Eastern culture throughout history.

On display and sale are works by Russian and foreign artists.
street theater

Stroll Through St. Petersburg in a Dream Play

A new kind of theater takes to the streets to immerse the audience in a dreamlike reality.
cinematic pandemic

This year's vintage could be marred by a dispute that erupted when Russia passed a law saying only Russian bubbly can be called "Champagne."