LONDON — Russian businesses and individuals repatriating money from Finland are likely to be behind capital outflows from the euro zone economy most interlinked with Russia's, according to consultancy CrossBorder Capital.

Finland, which shares a long land border with Russia, has suffered a net outflow of money every month for the last two years, with $705 million fleeing last month, up from $530 million in December.

Outflows from Finland peaked at $1.04 billion last September, CrossBorder Capital said. In total, almost $10 billion has fled the $250 billion economy in the past year.

"Finland has a problem. Foreign outflows … have accelerated in the wake of the Russian-Ukrainian crisis, and what that's telling us is that probably distressed borrowers or consumers in Russia with investment or cash in Finland are pulling their cash back," said Michael Howell, managing director of CrossBorder Capital.

European sanctions against Moscow in retaliation for its actions in Crimea and eastern Ukraine, and the Kremlin's tit-for-tat import bans, have dealt a hard blow to Finnish food producers.

In 2013, around 10 percent of Finnish exports went to Russia.

According to Statistics Finland, there were 31 Russian-owned companies in the Greater Helsinki area alone in 2011 with a total revenue of 2.54 billion euros. Most firms arrived just a couple of years earlier. In addition, many Russian companies have subsidiaries in Finland — 34 as of 2012. 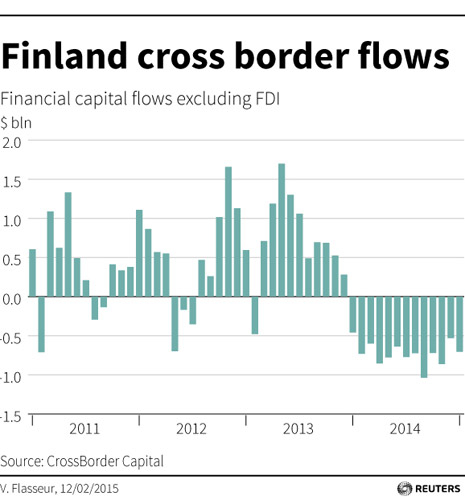 But Finnish trade with Russia fell by 8 percent in the first half of 2014 and is likely to have worsened since then as plunging global oil prices and the Western sanctions take their toll on the Russian economy.

The Finnish economy is expected to contract slightly this year.

Per Hammarlund, a strategist at SEB in Stockholm, said the data was unsurprising.

"I doubt it's Russian individuals doing this. It's more likely to be Russian exporters bringing back capital showing up in the data for Finland," Hammarlund said.

Creation of a single European energy market is the focus as ministers meet Friday in Latvia aiming to improve cross-border cooperation and reduce...
Lachin Corridor