Trying to identify Russian-supplied weapons and armored vehicles in use by rebel forces in eastern Ukraine has become an internet pastime in recent months, with zealous analysts jumping on every social media photo they can find that may suggest direct Russian involvement in the months-long conflict.

The debate has raged about the veracity of social media evidence, and reports from Western journalists indicate that some powerful weapons held by the rebels could not have been procured without Russia's help.

This equipment includes modern Russian military hardware that was not held in Ukrainian arsenals, and which the rebels could therefore not have stolen or bought from the Ukrainian military. Some of this Russian hardware is also currently unavailable on the export market.

A report issued late last year by the Australia-based Armament Research Services (ARES) took a careful look at the rebel arsenal and identified several "red flag" pieces of hardware that could only have come from Russia.

The origins of other equipment is less clear — both the Ukrainian and Russian armies evolved out of the Soviet military, and there is huge crossover in the gear they deploy.

The Moscow Times put together a rundown of some of the heavier equipment that has been sighted on the ground in eastern Ukraine with a look at its possible source:

Russia's most famous battle tank, the T-72, (see picture above) has been constantly upgraded since going into production in the 1970s. Though many military allies of the Soviet Union manufactured the tanks, a video made by eastern Ukrainian separatists appears to show a version with more modern upgrades in use with the Russian army, likely the T-72B3 model.

The T-73B3 only recently started rolling off production lines and into service with the Russian army. This latest model is not known to have been exported outside of Russia yet.

The video made by the separatists of the tank shows advanced Western electronics and optics made by the French firm Thales, as well as high-tech armor on the tank's exterior. Joseph Dempsey, an analyst at British research group the International Institute for Strategic Studies, later identified the T-72 in question as the most recent upgrade, which is only in service with the Russian military.

The T-72B3 would be a huge asset for the rebel forces, with advanced combat optics and control systems, as well as state-of-the-art reactive tank armor — explosive tiles that deflect incoming projectiles — making these tanks extraordinarily effective against Ukraine's Soviet-era tanks.

Physical Characteristics: 9.5 meters in length from the tip of the gun, 3.6 meters wide, 2.2 meters tall with a weight of 41.5 tons — small and light for a main battle tank. 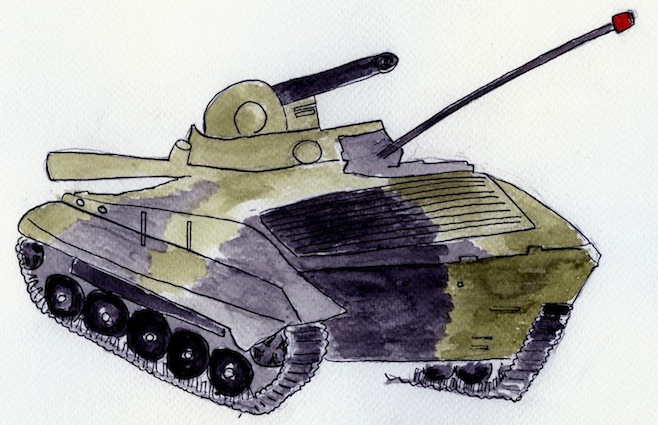 The BMP-2 is an armored vehicle built for an entirely different purpose than the bruising T-72. Introduced in the 1980s, it is Russia's go-to infantry fighting vehicle.

Similar to an armored personnel carrier, an infantry fighting vehicle is designed not only to transport infantrymen safely into hot combat zones, but provide them with fire support.

Less controversial than the T-72 tanks in use with the separatist fighters, variants of these vehicles saw wide use in all the armies of the Soviet Union's military allies. The BMP-2's predecessor first saw combat under Egyptian and Syrian army command during the 1973 Yom Kippur War with Israel.

The BMP-2 was first introduced into the Soviet military in 1980, and featured two turrets with 30 mm machine guns. It is an amphibious vehicle, capable of floating along the water.

Australia's ARES has identified the BMP-2AM, a post-Soviet variant produced in Russia, as being in use among the separatists. While Ukraine does possess a variety of BMPs, Russia never sold the updated BMP-2AM model to Kiev. 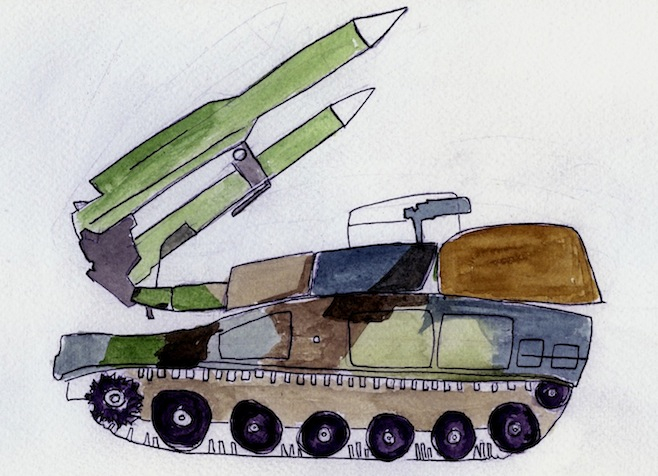 The Buk system is complex, supporting claims that rebels would not be able to operate it without assistance or at least basic training from Russia.

Though manufactured in Russia, it is in service with the Ukrainian military and if separatists are in possession of Buks they could have been either captured from Kiev or supplied by Moscow.

A mobile missile battery, the Buk complex consists of four components mounted on individual mobile platforms. Typically, a Buk unit has six launchers coordinated by the radar and command vehicles.

Investigations into the cause of the downing of MH17 have not proved that a missile system was to blame, but reports of Buk launchers in the area where the plane fell and the downing of high-altitude Ukrainian military aircraft flying similar routes in days prior have fueled speculation that the rebels have Buk systems in their arsenal.

Introduced: 1979, still in service with the Russian military.

Range: A Buk system's ability to track and engage targets at various ranges depends on the types of radar systems and missiles loaded into the launcher, but generally can be counted on to engage targets up to 30 kilometers away flying at a maximum height of 14,000 meters. MH17 was flying at an altitude of 10,000 meters when it was shot down.

Fire rate: A single launcher carries four ready to launch missiles, and can be reloaded in about 15 minutes, according to Globalsecurity.org. 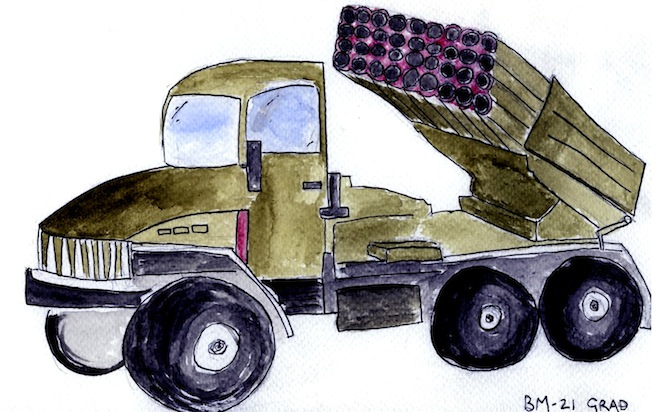 Russian-made Grad (Russian for 'hail') missiles have become increasingly controversial in recent months, as both separatists and Ukrainian soldiers have charged the other with deploying them against civilian targets in eastern Ukraine.

The rocket launcher looks a lot like the Soviet Army's iconic Katyusha rocket launchers, which were key component's of the Red Army's recovery and eventual victory in World War II.

The launcher sits atop the back of a truck, and can fire up to 40 missiles, each weighing 145 pounds, in 20 seconds. Grad units first saw combat during the Soviet Union's border dispute with China in 1969.

Today, the launcher remains in service in the Russian army, but is also in service with over 50 other militaries across the globe, according to Russia Beyond the Headlines.

Kiev has accused Russia of supplying the Grad rockets through its porous shared border, but given the wide proliferation of these weapons systems and their Soviet origin, they could have been captured from stockpiles of Soviet-era weapons on Ukrainian territory.

Introduced: 1963 by the Soviet Union

Rate of fire: 2 missiles per second

Range of fire: Anywhere from 20 to 45 kilometers, depending on the rockets being used. 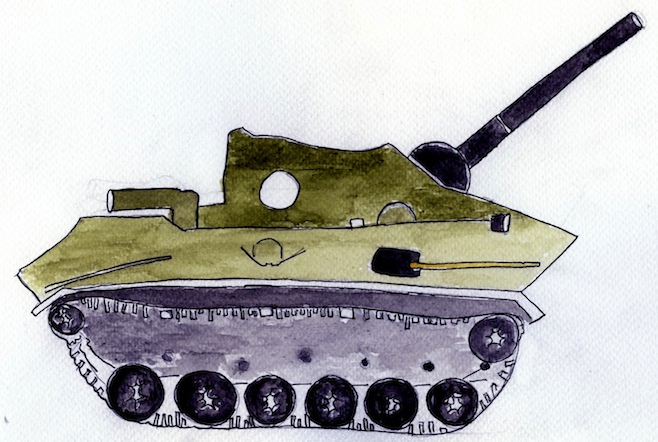 The Financial Times reported in July that U.S. Intelligence sources believed that Russia was providing the separatists with Nona self-propelled guns — artillery mounted on an APC chassis, allowing it to move itself, rather than have to be towed by another vehicle.

Self propelled guns are particularly adept at supporting infantry units on the offensive, and can even act as tank-killers at close range.

The 259 Nona is essentially a modified BTR chassis with a large 120 mm mortar cannon thrown on top. These units are relatively lightweight and robust, allowing them to be air dropped in alongside paratroopers, as was done in the Soviet war in Afghanistan.

Like the BMP, the Nona is amphibious, allowing it to float along bodies of water that would otherwise be a hazard.

Both Ukraine's and Russia's militaries inherited Soviet Nona units in 1991, and many of them are still in service, according to Janes defense consultancy.

Introduced: 1985 by the Soviet Union

Built by: Motovilikha Plants in Perm, Russia. Production halted in 1989.

Crew: 4 — commander, driver/mechanic, a gunner and a gun loader

Armament: 120 mm mortar, which can be used as an anti-tank weapon at closer ranges, space for anywhere from 40 to 60 rounds.

Firing range: 8.8 km to 12.8 km, depending on specific build of the artillery gun.

Ukraine's hryvna currency plunged about 30 percent against the dollar on Thursday, traders said, after the Central Bank abandoned the foreign currency...
news

The leaders of Germany and France will fly to Moscow on Friday on a dramatic initiative to try to end fighting in Ukraine that they fear could threaten...
news

Russia Says U.S. Arms Delivery to Ukraine Would Be Seen as a Threat

Moscow would see any decision by the U.S. to give Ukraine lethal weapons as a threat to Russia's security, Foreign Ministry spokesman Alexander Lukashevich...
Body count