Hundreds of thousands of people protested in Russia's Chechnya region on Monday against what its Kremlin-backed leader called the "vulgar and immoral" cartoons of the prophet Muhammed published by French newspaper Charlie Hebdo.

See the Photo Gallery: The Grozny March Against Charlie Hebdo in Pictures

Some carried signs declaring "I love my prophet Muhammed" in English and others waved flags, as security service helicopters flew overhead and police stood by.

In a sign that it had President Vladimir Putin's backing, the rally was shown live on state television. The Kremlin may see the protest as a way to vent pressure from Russia's Muslims after a similar rally was banned in Moscow.

"If needed, we are ready to die to stop anyone who thinks that you can irresponsibly defile the name of the prophet," Kadyrov said, wiping away tears on stage.

"You and I see how European journalists and politicians under false slogans about free speech and democracy proclaim the freedom to be vulgar, rude and insult the religious feelings of hundreds of millions of believers," he said.

“Authorities and intelligence agencies of Western countries may have been behind the [Paris] incident to provoke a new wave of recruiting for the Islamic State,” Kadyrov said, Russian media reported. He did not elaborate on his theory.

His condemnation of those who decide to republish cartoons of the prophet was echoed by the Russian Orthodox Church at the rally.

“All of the Russian Orthodox Church condemns those who make cartoons of the prophet Muhammed. We — the representatives of all the dioceses — say no to the evil that the West is trying to bring between our religions,” the church's Bishop Barlaam of Grozny and Makhachkala said, the TASS news agency reported. 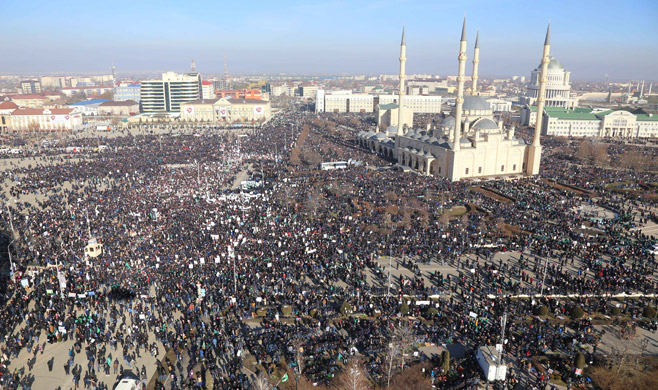 The rally ended when a call to prayer was blasted over loudspeakers.

Charlie Hebdo published a picture of Muhammed weeping on its cover last week after gunmen stormed its offices, killing 12 people. The gunmen said the attack was revenge for cartoons the magazine had published mocking Islam.

Demonstrations have taken place in several Muslim countries since then, some turning violent. French President Francois Hollande said anti-Charlie Hebdo protesters do not understand France's attachment to freedom of speech.

Kadyrov is barred from entering the United States, for alleged human rights abuses, and the European Union, under sanctions related to Russia's actions in Ukraine. He has used rallies before to demonstrate loyalty to Putin, though some say they are forced to attend.

Kadyrov is fighting against an insurgency aimed at creating an Islamist state in the North Caucasus and depends on Russian money and security forces to maintain an uneasy peace.

Some state-controlled and Kremlin-friendly media in Russia, where laws forbid offending religious sentiments, have questioned the value of free speech since the Paris killings.

A Frenchman who shouted "Glory to the Kalash!" in praise of the Russian rifle used in the massacre at Charlie Hebdo a day earlier has been given...
news

In Russia, Tears and Jeers After Charlie Hebdo Massacre

A mixture of genuine grief, petty political pandering and condemnation of a vaguely defined notion of blasphemy have dominated a broad array of Russian...
news

Moscow authorities rejected a request for permission to hold a march in defense of the feelings of believers, while two Muslim republics in southern...