Pro-Kremlin lawmaker Ilya Kostunov said in 2012 that even the stupidest among the State Duma's 450 lawmakers is smarter than the average voter. Alternative adjectives have been proposed — "more extravagant" among them — but everyone in Russia agrees: The lawmakers here do stand out.

Kostunov and his colleagues have been busy making an impact in recent years — more so than recently: The current Duma comes up with legal initiatives at an unparalleled speed, having introduced 4,315 bills since 2012 — roughly the same amount the previous Duma churned out in its entire four-year reign.

Many recent bills are sweeping, high-impact pieces of legislation that take effect at breakneck speeds: introducing taxes and restrictions within weeks, without first running them by the public, interest groups or impacted businesses.

The list of legal initiatives is lengthy enough to include a few — dare we say it — extravagant suggestions. To reflect this, The Moscow Times has gathered a handful of the Russian parliament's most unexpected and delightfully oddball bills — and one they seem to have overlooked.

This is the second installment of the list, comprising only the freshest produce from the Duma's ongoing fall session.

Did you know the Moscow Kremlin used to be made of white limestone? That was in the 14th century, and it quickly started to fall apart, prompting the tsars to hire the best Italian architects to design the architectural symbol of Russian power — whose now world-renowned red-brick walls were painted white until the late 19th century.

Mikhail Degtyaryov of the über-populist LDPR proposed that the Kremlin return to its original ivory color — which, he said, would highlight Russia's ethical superiority over the "morally decadent" West.

When the Kremlin was still white, Russians laid claim to wide swathes of North America's Pacific seaboard, from Alaska to California. But the empire stretched itself too thin — recognizing that, the Romanov dynasty sold off its American holdings, including Fort Ross in California.

Some historians have claimed that the buyer, Swiss immigrant John Sutter, never actually paid for the land, and the same lawmaker Degtyaryov — never one to turn a blind eye to historical injustice — called for a review and possible rollback of the deal.

The state of California has not commented so far on Russia's purported title to Fort Ross.

He has no documents because the state authorities refused to officially register little BOCh in light of the odd combination of letters and numbers that comprise his name. They were legally unable, however, to prevent other parents from naming their children Lucifer, Air Traffic Controller, Just A Hero and Lettuce Salad.

This fall, lawmakers vowed to come to the rescue of newborn Russians everywhere with a bill that would ban "exotic names."

They have yet to decide how to distinguish between morally questionable choices like Lucifer and perfectly respectable old Russian names like Dormedont or — a puzzler for English speakers — Foka.

As it stands, Russia requires advertisers to add translations of any foreign words used in advertisements.

But in the fall, a new bill proposed the imposition of a tax against companies that use Latin letters instead of the Cyrillic alphabet in public advertisements. If it happens, expect to drink "Кока-кола" and log on to "Фейсбук" from your "эппл айфон" during your next trip to Moscow. 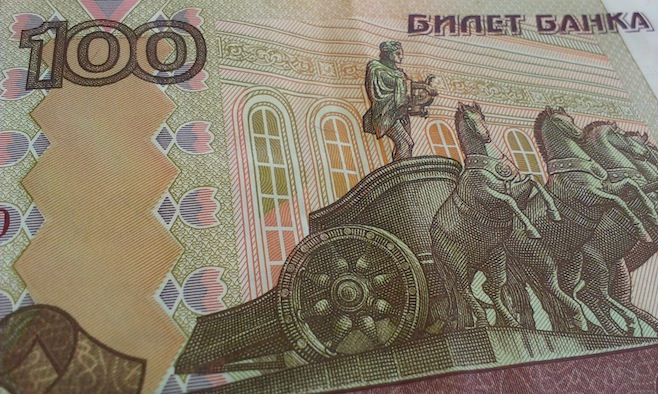 The 100-ruble bill with a picture of Apollo.

As an eagle-eyed lawmaker pointed out, Russia is one of the few countries in the world to feature genitalia on its money. For reference, check out the 100-ruble note's inadvertently pornographic depiction of Apollo and his chariot. The same image of Apollo can be seen atop Moscow's Bolshoi Theater in Moscow, albeit with a fig leaf added a few years ago for modesty.

The ruble-note genitalia is, however, about a millimeter in size and takes much squinting and dedication to make out, which is probably why the Central Bank was not sold on the idea.

Russia's annexation of Crimea from Ukraine and its alleged meddling in the Ukrainian civil war has landed dozens of officials and Kremlin-connected businessmen on Western sanctions lists, with some having already suffered the seizure of their property abroad.

This, at least, was proposed in a bill drafted by the ruling United Russia, aiming to compensate Russian citizens and companies for assets lost to "unlawful foreign justice."

Tapping the nation's pension money for the cause was also discussed, though public outcry saw the bill stalled — perhaps pending more confiscations.

Russians made 54 million trips abroad in 2013, before Moscow's relations with the world soured like curdled milk. Travel is still free in Russia — but those who want to see the outside world must pay up, believes lawmaker Oleg Nilov, who proposed an 18 percent tax on international flights.

The move will boost domestic tourism, said Nilov, who never mentioned the word "globalization" or commented on references to the Iron Curtain.

Admittedly, given the fact that the ruble has taken a nosedive against the dollar in recent weeks, the whole problem may dissipate on its own, with many Russians hard-pressed to afford foreign travel these days.

Nothing induces suicide like prepubescent ghosts, vampires, mummies, zombies and were cats — or so believe the parents calling for a ban on Monster High dolls, a U.S. brand popular in Russia.

Lawmaker Konstantin Subbotin was happy to oblige, though he shied away from commenting on the theory that many young suicides in Russia — a world leader in the children-killing-themselves ranking — are due to scary toys, not poverty, bullying or parental abuse.

He also stayed mum on other iconic U.S. toys, so it looks like Spiderman and Batman fans are in the clear for a while. But not for long, perhaps: Filmmaker-turned-lawmaker Stanislav Govorukhin proposed in September radical curbs on U.S. movies in Russia. He avoided discussing a conflict of interest.

Meanwhile, there is one thing slipping below the lawmakers' radar — though many activists say it should not. Russia still has yet to ratify Article 20 of the United Nation's 2005 Convention Against Corruption, which provides for criminal investigations of officials with assets far exceeding official salaries that they cannot account for.

Some of Russia's best men have been accused of owning such inexplicable assets, among them Kremlin propaganda chief Vyacheslav Volodin, Russian Railways head Vladimir Yakunin, and a handful of lawmakers. None admitted to wrongdoing.

Only 164 of 450 Duma members support the ratification of Article 20, according to whistleblower Alexei Navalny, who leads the ratification campaign. This includes two lawmakers from United Russia and six from the LDPR — the rest of those parties' factions are evidently more concerned with fighting monsters. Navalny managed to gather 100,000 signatures earlier this month in support of the ratification.

A lawmaker on the State Duma's Defense Committee has proposed banning the import of French wines in response to Paris' decision to suspend delivery...
blocked revenue

Russia remains committed to its last remaining nuclear arms control pact with the United States despite claims that it is failing to comply with the treaty...
'promoter of war'

IOC Rejects Russian Demand That Its Athletes Compete Without Restrictions

The International Olympic Committee on Tuesday rebuffed a Russian demand that its athletes be treated the same as those of other countries, in a growing...