The fighting, which punctured the patina of stability ensured by years of heavy-handed rule by the Kremlin-appointed leader, erupted just hours before Russian President Vladimir Putin was to give his annual state of the nation address in Moscow.

In his address, Putin said he was confident that local Chechen forces were capable of dealing with the "rebels," who he suggested were receiving support from abroad.

The National Anti-Terrorist Committee said militants traveling in three cars entered the republic's capital, Grozny, at 1 a.m., killing three traffic police at a checkpoint, and then occupied the 10-story Press House in the center of the city. The federal agency said six gunmen were killed inside the building, which was gutted in a blazing fire that also spread to a nearby market.

More gunmen were later found in a nearby school and security forces were sent to "liquidate" them, the agency said. No students or teachers were in the school when it was seized by the militants, RIA Novosti quoted vice principal Islam Dzhabrailov as saying.

Chechen leader Ramzan Kadyrov, who traveled to Moscow for Putin's address in the Kremlin, told journalists afterward that the security operation was completed and his forces had killed at least nine militants.

The National Anti-Terrorist Committee said 10 officers were killed and 28 wounded in the fight against the militants, who it said were from a known group operating in the North Caucasus.

Kadyrov said the militants were connected to Doku Umarov, a Chechen and longtime leader of Islamic militants in the North Caucasus who died last year.

Although unrest is common across the largely Muslim region in southern Russia, forceful security measures adopted by Kadyrov spared Grozny significant violence for several years. The relative calm has allowed Putin to claim success in subduing the Islamic insurgency in Chechnya after years of war. 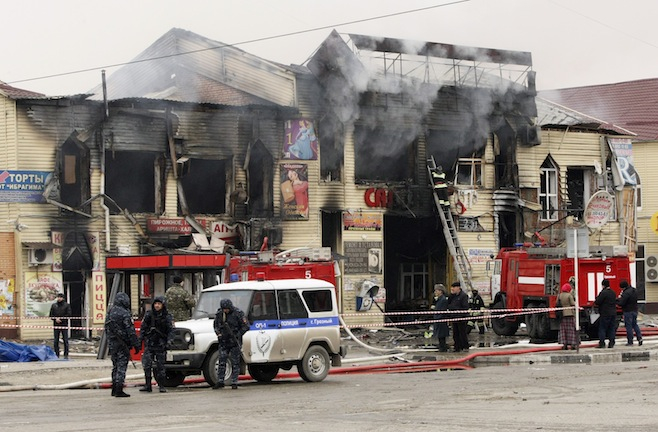 Police stand guard near firefighters extinguishing a fire at a market near the Press House building, a local media agency, in the Chechen capital Grozny on Dec. 4, 2014.

In October, however, a suicide bomber blew himself up outside a concert hall in Grozny, killing five policemen and wounding 12 others as the city celebrated Kadyrov's birthday.

Dmitry Trenin, who heads the Carnegie Moscow Center, wrote in a Twitter post that "the night attack in Grozny looks senseless, except as an attempt to embarrass Putin hours before his annual address to parliament." Putin was already under pressure to reassure Russians as fears grow over soaring inflation and a plummeting ruble.

LifeNews, a news outlet believed to have links to Russian security services, cited law enforcement officials as saying about 15 people seized three cars late Wednesday in the village of Shalazhi and drove to Grozny, some 50 kilometers away.

The Kavkaz Center website, a mouthpiece for Islamic militant groups operating in the North Caucasus, carried a link to a video message by an individual claiming responsibility for the attacks. The man in the video claimed to be operating under orders from Chechen Islamist leader Aslan Byutukayev, known to his followers as Emir Khamzat.

The video could not immediately be verified.

A few years after the collapse of the Soviet Union, Chechnya was plunged into a full-scale war when separatist rebels pursued independence for the republic. The violence was largely confined to that small republic, but rebels ventured into other parts of Russia.

A fragile peace settlement was reached with Moscow until 1999, when an insurgency movement increasingly inspired by radical Islamist ideas reignited the conflict. A military crackdown succeeded by years of aggressive rule by Kadyrov has quietened the region, pushing unrest to neighboring provinces.

Kadyrov has been widely denounced for human rights abuses, including allegations of killing opponents. He has also imposed some Islamic restrictions on the region, including mandatory headscarves for women in public.

In a message Thursday on his Instagram account, which Kadyrov uses to issue public statements, he boasted of running the operation at the Press House himself.

"Not one bandit managed to get out," he wrote.

Kadyrov posted a picture showing the lower half of an apparently dead gunman lying beside a rifle, but it was not immediately clear if it showed one of the presumed attackers.

Islamic State commander Omar al-Shishani is very much alive, despite claims by Chechnya's leader that he was killed last week, a Georgian newspaper cited...
blocked bureau

The tech giant's Russian entity was fined $113.5 million in December 2021 for failure to remove content banned in Russia.