YALTA, Crimea — One day in October, a dozen armed men in masks drove up to the gates of Yalta Film Studios. They weren't actors, and this was no make-believe. It was a hostile takeover.

"They forced all the employees onto the ground, sealed off the premises and halted the work of the studio," said owner Sergei Arshinov.

The studio, nestled in the hills overlooking the Black Sea, is just one of thousands of businesses seized from their owners since Crimea was annexed by Russia eight months ago. Crimea's new pro-Moscow leaders say the takeovers, which they call nationalizations, are indispensable to reverse years of wholesale plunder by Ukrainian politicians and oligarchs.

But an Associated Press investigation throughout this peninsula the size of Massachusetts found many instances of less noble practices: legal owners strong-armed off their premises; buildings, farms and other prime real estate seized on dubious pretenses, or with no legal justification at all; non-payment of the compensation mandated by the Russian Constitution; and targeting of assets belonging to or used by the Crimean Tatar ethnic minority and the pro-Kiev branch of the Orthodox Church.

In a preliminary estimate, Ukraine's Justice Ministry told The Associated Press that about 4,000 enterprises, organizations and agencies have had their property expropriated.

Some holdings, from shipyards to health resorts, were publicly earmarked for repossession by Crimea's regional government, now part of the Russian Federation. Others were simply seized by armed men, sometimes carrying official decrees that were never published or no documentation at all.

Crimea's Russia-installed prime minister, Sergei Aksyonov, says the nationalization law enacted Aug. 8 seeks to right wrongs committed by officials in Ukraine, where a lot of state property was sold off at bargain prices because the government was broke, or to benefit cronies.

"Over the past 10 years, the majority of state property was illegally stolen from the government," Aksyonov told AP. "Enterprises were privatized via fraudulent schemes and the state didn't receive any money."

At the 34,600-acre Dobrobut farm in far eastern Crimea, the fields now lie fallow, and the 26 employees haven't been paid for months.

It was June when two carloads of men arrived at the farm with pistols, clubs and assault rifles. The men had a piece of paper signed by Aksyonov.

The document, seen by the AP but never issued publicly, proclaimed that the land tilled by Dobrobut — under lease from the local village — was being nationalized. The men took over not only the fields, but also Dobrobut's buildings, its harvest and its equipment, worth a total of about $1.6 million.

Alexander Garfner, an attorney for Dobrobut, sued in a Crimean court, now part of the Russian justice system. On Sept. 2, the lawsuit was thrown out.

"If we look at the law, then there is no basis for this," Garfner said. The nationalization attempt, he said, "was clearly just a land grab, because it's big money."

The seizures investigated by the AP vary in scale and type of assets involved. But many, like Dobrobut, are reliably profitable and would require little additional investment, including a bus company with a monopoly on $14.6 million in annual ticket sales. 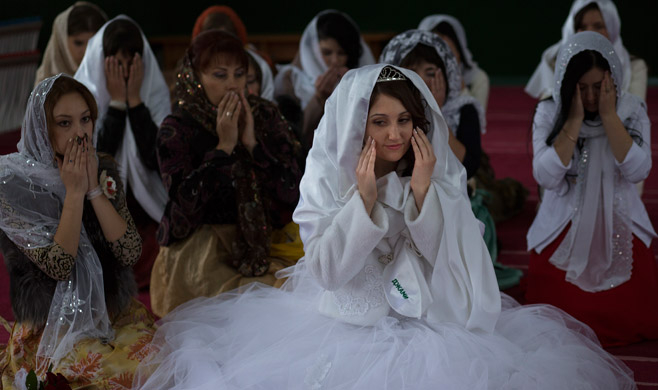 Crimean Tatars praying at a wedding in a mosque. Assets belonging to Tatars have reportedly been targeted.

'They Tried to Influence Me'

Some of the losers in Crimea's new order have been Ukrainian magnates or pro-Kiev politicians stripped of their assets.

The biggest loser so far has been Igor Kolomoisky, a Ukrainian oligarch and nationalist firebrand. Aksyonov's government has taken 65 of his properties, including all branches of Privatbank, one of the largest in Crimea.

Andrei Senchenko, a local leader of Ukraine's Fatherland party, estimated his own losses at "several tens of millions of dollars," including shares in a seized building materials plant and office center.

"They tried to influence me and, what's more, made me a definite proposition, that I should change my rhetoric and relationship to the occupation of Crimea," Senchenko said of Crimea's leaders. "But I gave a clear 'no.'"

The leadership of the 300,000-strong Muslim Tatar minority, by far the loudest voice against Russian annexation, was ousted from the building it rents in downtown Simferopol. The pro-Kiev branch of the Ukrainian Orthodox Church has had 11 of its 18 parishes shut, and authorities have told the archbishop they want to hike the rent on the building he uses as his cathedral by 600,000 percent.

For losers in Crimea's great property grab, there is often no redress.

In April, the Trans-Bud company delivered 54 vehicles, from excavators to dump trucks, to a Simferopol-based firm, Krymsky Passazh. But the customer never paid the $5.2 million bill, and the equipment is now in the hands of camouflage-clad self-defense forces.

Trans-Bud took the matter to the police, company director Vadim Padalko said. But he said after an investigator was told the equipment was being nationalized, police "decided no crime could be established."

The AP contacted the firm three times, but each time a woman hung up when questioned about the equipment deal.

Business owners affected by nationalization say they have had no better luck in the region's courts or getting the attention of Russian authorities in Moscow.

Aksyonov, the prime minister, denied any legitimate owner or business person had been hurt in the property seizures.

But at Yalta Studios, they tell a different story. They managed to get the armed men to quit the premises, but haven't been able to register yet as a Russian company. Without that status, they can't legally remain in business after Jan. 1.

The owners told AP they've plowed $16 million into the studio since becoming sole proprietors in 2004. As compensation for the sets, cameras and other lost property, they say they've been offered $1 million. An employee, who spoke on condition of anonymity out of fear of official reprisal, said he doubts they'll get anything from Crimean authorities in the end.

"It's a robbery," the employee said, "pure and simple."

Russia has accused NATO of destabilizing northern Europe and the Baltics by carrying out drills there and announced new military exercises of its...
Sergei Furgal