Many people who send letters to the first and last president of the Soviet Union, Mikhail Gorbachev, still write on the envelope: "To the Secretary General of the Communist Party, Kremlin." The Russian postal service is used to this and redirects the mail to the Gorbachev Foundation, headquartered in a modern building about seven kilometers north of the Kremlin.

Some of those letters are harshly critical of Gorbachev, who is regarded as a traitor by many Russians who regret the demise of the Soviet Union and the shocking economic transformation that followed. Some of the more vitriolic missives even encourage him to commit suicide. But at 83, Gorbachev is defiant and determined.

"I live and will continue to live according to my conscience and principles. Everyone else can go crazy," he told The Moscow Times in an extensive interview this week.

Despite saying he is "already a part of history," Gorbachev said he cannot simply observe passively what is happening in Russia today.

"I need to participate, and I will. Nobody will shut my mouth, even though people wanted me to emigrate. I don't want to leave, let those people leave," Gorbachev said, banging his hands on the table for emphasis.

Gorbachev, who in recent months underwent treatment at a hospital in Moscow, said he has been reported dead at least 10 times.

"I am called a traitor because I destroyed so many nuclear arms. The second treachery is that we built good relations with the U.S.," he said.

For those who address their letters to Gorbachev at the Kremlin, time has clearly stood still. And today, when President Vladimir Putin's Russia and the West find themselves at odds once again, the time when secretary generals in the Kremlin were engaged in an ideological rivalry with the West seems closer than ever.

During the festivities marking the 25th anniversary of the fall of the Berlin Wall this month, Gorbachev warned that the world risks a new Cold War. As someone who worked his way up through the Communist Party at a time when the Soviet Union and the U.S. were ready to destroy each other in a nuclear war and who then worked hard to eliminate divisions in Europe and the world at large, Gorbachev is better qualified than most to offer insight into the strikingly similar issues the world faces now.

Today, Gorbachev argues that the problems in Ukraine and the world at large are in part due to errors made during the collapse of the old system.

"What is happening now in Ukraine is in many ways due to the mistakes of the breakup of the Soviet Union. Once they decided to dissolve the union, they should have agreed on territories and borders," Gorbachev said.

"Crimea was Russian, and most people in Crimea voted in favor of joining Russia [in the recent referendum]. I supported this move from the beginning, and I am half-Ukrainian. I worry about what is happening in Ukraine. … It might not be a scientific fact, but we are the same people," he said.

Gorbachev believes that the Soviet Union collapsed mainly due to the political self-interest of local leaders — above all, the first Russian President Boris Yeltsin, who, Gorbachev said, wanted to "get rid" of him.

Gorbachev has never communicated with Yeltsin since. "There was nothing to talk about with this usurper who went behind my back," Gorbachev said. 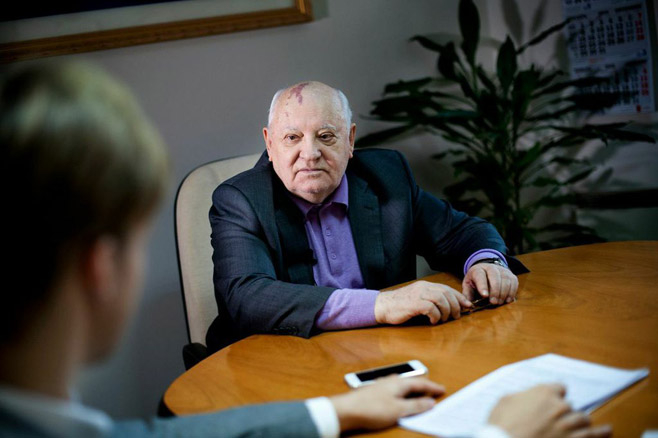 Gorbachev says he supports Putin, despite having criticized previously.

The Gift of Hindsight

At the same time, Gorbachev does not believe that the Soviet Union should have been preserved in its old form as a repressive state.

"We could not live like we did before, when people would make a joke and find themselves in jail the next day. There were so many problems, but society did not discuss them," he said."

"People had been breaking each other's bones in lines for Italian shoes in our country," he said.

Gorbachev said the union should have been preserved "with a new essence that would consist of independent sovereign states."

The West, according to Gorbachev, used the resulting chaos in Russia to its own advantage.

"The West, especially the Americans, applauded Yeltsin. A half-suffocated Russia was ideal for them. Much of the mess we are in today is due to what happened then," Gorbachev said.

"The main thing is that trust has [now] been broken. Everybody was losing because of the Cold War, and everybody won when it ended," he said, referring to the ongoing rift between Russia and the U.S.

"It is true that the spirit of these [German unification] agreements were broken because we agreed that NATO infrastructure would not expand into East Germany, which creates a certain spirit. When they began to accept new countries into NATO in the 1990s. That violated the spirit of the agreements," he said.

The question of the promise allegedly made to Russia by the West not to expand NATO eastward is often mentioned by Putin in his foreign policy speeches, with NATO expansion used to justify Russia's actions on the world stage.

Gorbachev said that when he was in office the issue of expansion was not discussed, as Eastern European countries had not signaled any desire to join NATO.

"The main idea was that both NATO and the Warsaw Pact would gradually transform from military-political into political organizations," he said.

"We pledged not to aim to seek military superiority over each other. Is this the case now? No. We destroyed so many weapons, tanks and so forth, and now it is all coming back," he said.

The tense relations between Russia and the U.S. are also created by certain groups in both countries in favor of confrontation, Gorbachev said.

"There is the same type of public both in the U.S. — including the military-industrial complex that cannot imagine its life without weapons and war — and here in Russia too. Every U.S. president feels obliged to wage a war during his term or, even better, two — as the saying goes. I am serious. It's not a joke. This idea has survived, and that is very bad."

Gorbachev, who on Thursday presented his new book about his life after leaving the Kremlin, said he supports Putin and ranks him with the political leaders of his own rule, such as then U.S. President Ronald Reagan and U.K. Prime Minister Margaret Thatcher.

"He is a statesman. I can say one thing: Despite all the criticism, I strongly supported him, especially during his first term, because Russia was disintegrating. He has done a lot. I said the president is successful. I criticized him too because you have to criticize leaders," Gorbachev said.

He accused Putin of saying "what suits him" about the Soviet Union's collapse, which Putin famously described as the 20th century's greatest geopolitical tragedy.

"Doesn't he know how it all happened? He knows, but says what suits him," Gorbachev said, adding that Putin is currently "under attack" by media that are "not free."

"There are no free media, either in Russia or the West. Everybody is dependent and works for the benefit of their own states. That is beyond doubt. For instance, I was in a hospital, where I had to do everything as prescribed. This reminds me of the press: It is free, but follows orders," he said.

A new book devoted to the U.S. television series "Twin Peaks" claims that Soviet leader Mikhail Gorbachev was such a fan of the cult show that he enlisted...
news

On the 25th anniversary of the fall of the Berlin Wall, Mikhail Gorbachev warned that the world is on the verge of a “new Cold War.” His enthusiasm...
russia's response

The White House upped its threat assessment ahead of a meeting between the top U.S. and Russian diplomats.