"Mr. Gorbachev, tear down this wall," U.S. President Ronald Reagan demanded in a 1987 speech at Berlin's Brandenburg Gate. Some two and a half years later, on Nov. 9, 1989, Berliners flocked to the wall that severed East and West Berlin and did exactly that.

But as the city celebrated the 25th anniversary of the fall of the Berlin Wall on Sunday, Reagan's catchy imploration is little more than a faint echo against a backdrop of blaring political tensions that former Soviet leader Mikhail Gorbachev says have brought the world to the threshold of a "new Cold War."

Gorbachev, whose policies of glasnost and perestroika precipitated the collapse of the Soviet Union and the dissolution of the Eastern Bloc, defended Russian foreign policy in his speech at a symposium in Berlin on Saturday.

"The world is on the brink of a new Cold War. Some say that it has already begun," Gorbachev said on Saturday in comments carried by Reuters. "Euphoria and triumphalism went to the heads of Western leaders. Taking advantage of Russia's weakening and the lack of a counterweight, they claimed monopoly leadership and domination of the world."

Gorbachev, 83, also said that President Vladimir Putin's speech at the annual Valdai International Discussion Club forum in Sochi on Oct. 24 — which many analysts interpreted as an anti-Western tirade — in fact expressed the "desire to find a way to decrease tensions and ultimately build a new basis for partnership."

The father of perestroika told the Interfax news agency last week that although Putin was not above criticism, he "protects Russia's interests better than anyone else."

Gorbachev's recent track record hasn't exactly been pro-Putin. During the 2011 Moscow street protests sparked by anger over allegations of rigged parliamentary elections, Gorbachev called on then-Prime Minister Putin to resign, saying that his dismissal of the demonstrations had been "shameful" and "embarrassing." Last year Gorbachev told the BBC that Putin's inner circle was full of "thieves and corrupt officials" and criticized certain controversial legislation passed in Russia under Putin as an "attack on the rights of citizens."

But the former Soviet leader seems to have grown fonder of Putin in the past year, which has seen Russia annex Crimea and deny its involvement in ongoing clashes between Ukrainian forces and rebels in eastern Ukraine. "While Crimea had previously been joined to Ukraine based on the Soviet laws … without asking the people, now the people themselves have decided to correct that mistake," Gorbachev said at the time of Russia's annexation of the Black Sea peninsula, Interfax reported. "This should be celebrated, not sanctioned."

Still, many observers were surprised by Gorbachev's verbalization of the Kremlin's narrative over the weekend, and Russian pundits were split on what may have inspired the bold political move.

One analyst suggested that Gorbachev's sentiments reflect a sincere attempt to ease diplomatic tensions between the East and West.

"I have known Mikhail Sergeyevich [Gorbachev] for long enough to tell you that his speech did not constitute a direct endorsement of Putin's policies or any other form of politics for that matter," said Viktor Mironenko, the former first secretary of the Soviet Komsomol who now serves as the head of the Center for Ukrainian Studies at the Russian Academy of Sciences.

"Gorbachev doesn't have that much time left [to live], and like many Russians, he is worried about the future of his country. He has no political agenda. He has harshly criticized Putin in the past. Gorbachev is simply telling us we need to go back to the spirit of the 1990 Charter of Paris for a New Europe, when there was cooperation between the East and the West," Mironenko said. 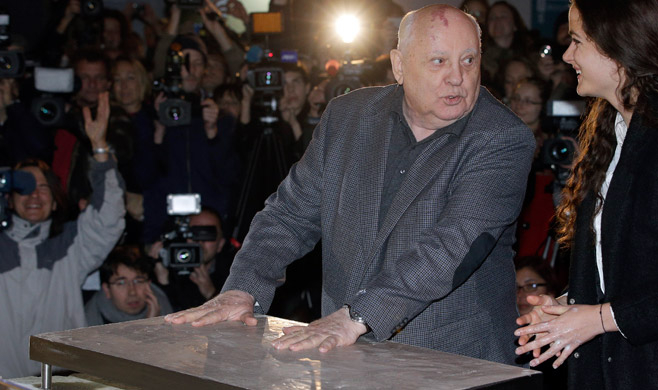 Gorbachev memorializing his handprints Friday at a celebration in Berlin.

State news agency RIA Novosti reported Sunday that Gorbachev, who said the current political tensions between Russia and the West stemmed from a "collapse of confidence," proposed founding a working group to create a "common European home" where cooperation would prevail.

A second analyst suggested that Gorbachev's recent media statements may have been motivated by a desire to improve his reputation at home.

"Gorbachev is a Russian citizen, and like the majority of Russian citizens he supports the state's position on its relations with the U.S., the EU, and the situation in Crimea," Matvey Polynov, a professor of modern Russian history at St. Petersburg State University, told The Moscow Times.

"But we must keep in mind that Gorbachev is not as popular in Russia [as he is in the West] because he is accused of having made many political mistakes that led to the collapse of the Soviet Union. There is no doubt that Gorbachev might be trying to restore his image in Russia, where he is often seen as having failed the state."

The popular notion that Gorbachev was a traitor has been also been adopted by Russian lawmakers. In April, five members of parliament requested that an investigation be launched against Gorbachev over his role in the collapse of the Soviet Union.

The octogenarian's health has deteriorated markedly in recent years, even having kept him from traveling to the Georgian capital Tbilisi in July to attend the funeral of his friend and political ally Eduard Shevardnadze, the Soviet foreign minister who supported perestroika during Gorbachev's tenure.

In early October, Russian media reported that Gorbachev had been hospitalized and was fighting for his life, making it all the more surprising that he found the strength to attend the Berlin Wall anniversary events in Berlin over the weekend, and leading some observers to speculate about the possibility of Kremlin involvement.

While Mironenko denied that the Kremlin could have facilitated or overseen Gorbachev's trip to Berlin, Polynov said the possibility that Moscow could be using his resonance with the West to disseminate its own message could not be dismissed.

"There is no way of knowing the extent to which Gorbachev has coordinated with the Kremlin," Polynov said. "But we cannot exclude the fact that Gorbachev might have had consultations with the Kremlin ahead of his trip. But only Gorbachev and the Kremlin will know about this. One thing here is certain: The West listens to Gorbachev when he speaks."

Former Soviet Leader Mikhail Gorbachev has called on Russia and the West to put an end to their war of words and retaliatory sanctions over Ukraine...
russia's response

The joint statement on Ukraine's conflict with pro-Russia separatists was the first since 2019.
moment of truth

Both the U.S. and NATO said they were prepared for any scenario following their responses to Moscow's demands.