There is no snow on the ground let alone ice, but Gorky Park opens its enormous ice rink Friday with a grand show.

Sasha Frolova, who won the Alternative Miss World title earlier this year in London in an amazing costume even for that eccentric competition, will perform as will British pop singer Charli XCX.

Frolova had to use a special lubricant to fit into her skin-tight, all-body costume at the Alternative Miss World, in Shakespeare's Globe Theater, British media reported, and her costume will likely be as fantastic Friday.

The rink's design motif this year is pop art with iconic Russian images, and its centerpiece is a 3D animation installation that uses 30,000 LEDs. Frolova, a performance artist, will do a pop art act on ice during the night.

This year the rink, which is a massive 18,000 square meters in size, will offer the usual ice skating lessons for beginners plus figure skating lessons from world champions, a hockey rink for rent and a separate 800-square-meter skating rink for children aged 3 to 12. The rink also includes a 1,000-square-meter food zone with four restaurants: Stew, Pueroport Tea, Vincent Jonathan Cafe and AC/DC.

More than half a million people visited the ice rink last season over the course of 120 days, and Gorky Park is going all out to increase visitor numbers even more, park director Olga Zakharova told the Moscow Times in an e-mail interview.

The park started extensive redevelopment in 2011 after years of neglect. Hip cafes replaced the kebab stands and yoga lessons and contemporary art shows came in instead of fairground attractions. 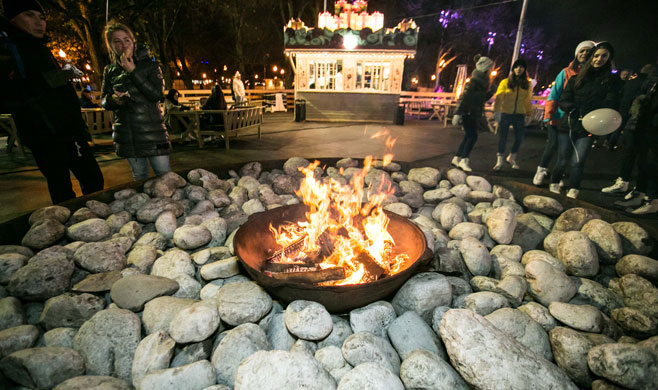 A skater munching on food by an open fire in the ice rink's last season.

"Our priority was to break the established stereotype about the park and bring the city's residents back here," she said, "In the 1920s, the park was a platform to showcase the country's achievements. The same commitment to innovation can be seen in what we are doing with it today."

The latest efforts to woo visitors to the park are targeted at tourists and foreign visitors and include the introduction of weekly guided tours in English and children's programs with excursions from teachers who can speak a number of foreign languages. The park has also introduced automatic and manual wheelchairs for the disabled and the elderly free of charge.

"Gorky park should be accessible to all, regardless of age, income, disability and language appliances," said Zakharova

Work is also under way on the bringing back some of the park's cultural traditions such as outdoor theater, she said. During the summer, the park hosted a public performance of the ballet "Giselle" by the Stanislavsky and Nemirovich-Danchenko Moscow Music Theater for 12,000 people under the stars, just like in the 1930s.

Zahkarova and her team are now focusing on Sparrow Hills and the green areas nearby that lead to Moscow State University and that are now part of the park. "The park is in fact the face of the city and its culture, with landscape, design, architecture, history and modern culture closely intertwined," she said.