ST. PETERSBURG — Every morning by 11 a.m. Lidia Moshkova is in her office supervising her 17 employees. Not bad for an 84-year-old.

Moshkova, who heads the firm “Veterans of Excursion Labor,” has been working as a tour guide for almost 60 years since she got a job at the Leningrad Tour Guide Bureau in 1957.

She recalls the early years of her career with pleasure and enthusiasm. “That was a time when we prepared our city excursion programs so thoroughly that any of us could write a dissertation about the topics,” Moshkova said. “We spent weeks in archives, read a great deal of material and met with witnesses of the events that we were to describe to our tourists. Our tour guides even published books on their subjects.”

“I’m not sure that many modern guides do such thorough research. Many of them rely on Internet sources that obviously need double-checking. I also notice that modern guides often miss making connections in their narration and don’t give a full picture of the city or period of history they refer to,” she added.

In the 1950s and 1960s, Moshkova, like many other tour guides in the country, focused on tours about revolutionary history. She took tourists to visit the graves of Lenin’s family members at the city’s Volkovskoye Cemetery, the house at Angliiskaya Embankment where Lenin’s mother grew up, and she traveled to the Siberian village of Shushenskoye, where Lenin and his wife Nadezhda Krupskaya spent some years in exile, meeting local people who still remembered the famous revolutionary couple living there.

“We like extremes in our country. In our Soviet past we probably overdid things with the cult of Lenin, but after the breakup of the Soviet era we began to reject everything connected to Lenin,” Moshkova said regretfully.

Her profound knowledge of Lenin’s biography led to Moshkova receiving an offer to work on 10 programs for Lenin’s 100th anniversary on Soviet Central Television, an achievement that she is still proud of.

However, not only revolutionary themes were popular in the Soviet Union. Other topics of Moshkova’s guide programs covered the biography of renowned Russian singer Feodor Chaliapin, composer Nikolai Rimsky-Korsakov and actress Vera Komissarzhevskaya.

“The topic of Chaliapin is still one of my favorites. I love his apartment museum on Ulitsa Graftio,” Moshkova said.

Moshkova’s face saddens as she remembers the time of Gorbachev’s reforms in the late 1980s and the breakup of the Soviet Union in early 1990s. The City Excursions Bureau, where she worked, got into financial difficulties and had to close down.

“We kept thinking about how to save the experience and people we had in that sphere, and we finally decided to open the country’s first excursion cooperative in 1988,” Moshkova said.

“We gathered a group of tour guides who had up to 35 years of work experience, called our cooperative Veterans of Excursion Labor, and developed new tour topics that the new political era allowed us to research,” she said.

New popular topics of city tours covered the Silver Age of Russian poetry, the “returned names” of prominent Russians, including scientists, writers or generals largely forgotten or ignored for political or other reasons, and the estates of the Russian nobility. 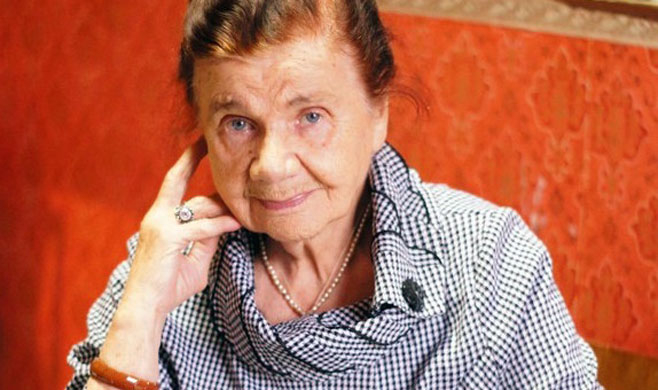 Moshkova began working as a guide in 1957 at the Leningrad city bureau.

In those years Moshkova’s team developed tours focusing on the Russian scientist Nikolai Vavilov, theater director Vsevolod Meyerhold, General Vasily Blyukher and many other prominent people of the country who suffered during Stalin’s repressions.

Today Moshkova’s firm continues to offer regular city and St. Petersburg suburb tours along with special individual programs. The company offers tours on St. Petersburg’s numerous bridges, the history of trade and financial life in the city, different architects of St. Petersburg, the city’s poets and writers, including Alexander Pushkin, Fyodor Dostoyevsky, Alexander Blok and Sergei Yesenin, and trips to towns outside St. Petersburg and the Leningrad region, such as Veliky Novgorod, Staraya Ladoga, Tikhvin and many others.

The Veterans of Excursion Labor also include excursions focusing on the history of foreign communities in the city, covering its Dutch, English, Finnish, French, German and Swedish connections. All the tours are also available in English, German and French.

Currently the firm’s specialists are working out a new tour on the connection of St. Petersburg to Crimea. “The city’s connection with Crimea was historically very close,” Moshkova said.

These ties include the St. Petersburg-based Duke Grigory Potyomkin, the favorite of Empress Catherine the Great, who played an important role in the inclusion of Crimea to Russia at the end of the 18th century. Additionally, there was the Battle of Sinop in which the Russian Black Sea Fleet defeated the Turkish squadron in 1853, where a number of St. Petersburg admirals led by Admiral Pavel Nakhimov fought heroically. In October 2013 a monument to the admirals was unveiled in St. Petersburg on the Sinopskaya Embankment.

The history also covers the cultural ties of the regions, such as world-famous maritime painter Ivan Aivazovsky, who was born and died in the Crimean city of Feodosia but lived and worked for some time in St. Petersburg. Additionally, many members of the St. Petersburg elite fled to Crimea after the Bolshevik Revolution, Moshkova said.

Moshkova, whose portrait was displayed in the city’s streets this year as a part of the campaign “People of Our City” as “a person who has greatly contributed to the tour guide industry,” said she still gets enormous pleasure from her work and hardly even thinks about her advanced age.