As most Russians make do with a life without the European cheese that has been banned from their country, residents of Siberia's Altai region won't have to thanks to a small agricultural renaissance in their own backyard.

In the small village of Solonovka, Alla and Alexander Kokorin have this year begun producing and selling their own goat milk version of the creamy French classic Camembert.

"We wanted to eat these cheeses, and so we decided to make them ourselves. It's very simple," Alla Kokorina told The Moscow Times on Thursday.

The Kokorins' new venture coincides with Russia's one-year ban on cheese and other food products imported from the European Union, a response to Western sanctions against Russia over its involvement in the Ukraine crisis.

Food lovers across the country were particularly dismayed by the loss of European cheese, for which Russian agriculture offers little substitute. Russian politicians, meanwhile, lauded the ban as a window of opportunity for Russian agriculture to pick up the slack without competition.

But for the Kokorins, sanctions and the food ban had nothing to do with it.

"We live in the country, and in our village they didn't sell cheeses made with mold. There wasn't any here from the start, regardless of sanctions," Alla said.

Alla had in fact been making cheese for a long time, but it was only this year that she began experimenting with the molds that are key ingredients in many quintessential French cheeses. After reading up on the subject, she went to France and the Czech Republic to immerse herself in the traditional process.

When their first cheeses made waves in the local community, the Kokorins were contacted by Yeda Ryadom (or "Food Is Near"), a startup website that sells fresh, locally produced foods to the residents of the regional center Barnaul and its surrounding suburbs.

The cheese caused a flurry of excitement when it went on advance sale on Yeda Ryadom's website at the price of 158 rubles ($3.50) per 100 grams, said Sergei Bazhin, co-founder of the Internet store. 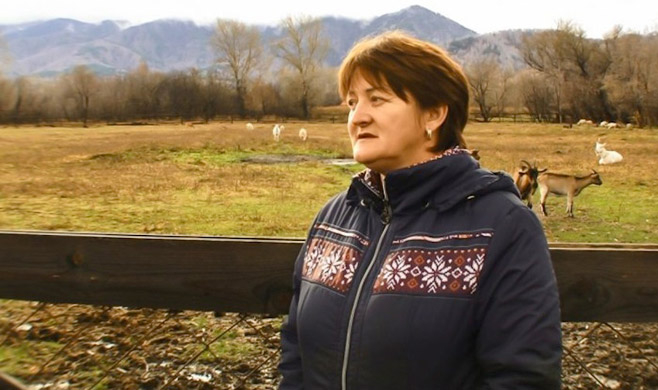 "People had gotten used to Camembert, they had started missing it," Bazhin said.

The Camembert is the Kokorins' only cheese for sale so far, but likely not the last. Alla has also dabbled in production of a smoked cheese similar to mozzarella and a goat cheese equivalent to Roquefort, which could be offered to consumers by the end or the year.

Production will never reach industrial scale, however, as all of the Kokorins' cheeses are made with the milk of their own small flocks of goats and cows.

Cheese production in Siberia is not always so pristine. Earlier this year, investigators opened a criminal case against workers at a string cheese factory in Omsk who had taken pictures of themselves bathing in a tub of milk and posted them on social media website VK.

Perhaps all the more reason, then, that Russia has in recent years seen a steadily growing interest in local produce, small farms and healthy eating. Farmers cooperative LavkaLavka, founded in 2010, has set a precedent as a highly successful online store that has expanded to several physical locations in Moscow.

"It's clear that people have started thinking about what they eat. Altai is an agricultural region, but even here our customers say that you can't always find healthy, natural food in stores," Bazhin said.

Yeda Ryadom launched its website in the beginning of this year, becoming the first of its kind in the Altai region with interested customers coming to them from all walks of life.

Their search for local produce has led them to some unexpected finds, such as a tea made from bergenia, a flowering plant native to the region, that Bazhin describes as a Russian equivalent to China's dark, fermented pu-erh tea.

In this movement towards healthy living, the Kokorins are an ideal example. Alla and Alexander moved to the country from Biysk, a city of 200,000 not far from their village, in search of fresh air and good food. Now they run a small recreation facility, in addition to their farming activities.

Investigators have opened a criminal case against staff at a string-cheese factory in Omsk after evidence of gross hygiene violations was uncovered...
news

When Russia banned food imports from Western countries last week, cheese-lovers were horrified. In the upcoming decimation of consumer choice, the cheese...
news

The return of the artichoke to Russia was a personal triumph for Boris Akimov, a former journalist who serendipitously turned his passion for eating well...
stream of letters