British film star Ralph Fiennes charmed the crowds as the New British Film Festival opened with a showing of his new movie "The Invisible Woman," about writer Charles Dickens' affair with a younger woman.

Shorn of the bushy beard he wears as Dickens in the film, Fiennes spoke in Russian at the start when talking after the showing of the film, which he also directed, before switching to English.

"I used to think you had to totally become someone else, but actually I think the soul, the essential spirit of the actor has to feed into a performance,” Fiennes said, when asked whether he drew inspiration from within himself when playing a role. “You draw on bits of yourself — sometimes you might not know those bits exist, but the part demands that you find them. I think there's an essential part of the actor that is the raw material for any performance." 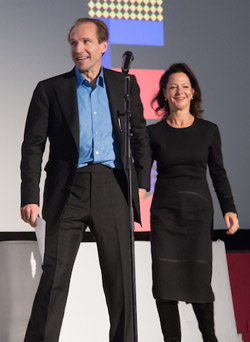 Fiennes and Tana at the opening.

Fiennes is a frequent visitor to Russia. Last year, he learned Russian while living in the Smolensk region in preparation for his role in a yet-to-be released Russian-language adaptation of Ivan Turgenev's “A Month in the Country.”

“It’s very special and moving to see somebody so committed to work and who has such a fine vision,” Gabriella Tana, producer of “The Invisible Woman,” told The Moscow Times. “Everybody loves working with him. They do their best because everyone wants to please him.”

Apart from Fiennes, the festival, in its 15th year, is a bumper collection movies ranging from premieres like "The Invisible Woman" to documentaries, shorts, animation and a retrospective of Mike Leigh, one of Britain's most-loved directors, plus talks and lectures.

The British Council aims to show the best of British cinema to Russian audiences, said Maria Nikanorova, who is helping organize the U.K.-Russia year of cultural exchange.

Three of Leigh's films are being shown in the retrospective: "Life Is Sweet," a tender, tragicomic tale of a North London working-class family; "Topsy-Turvy," about comic opera geniuses Gilbert and Sullivan; and "Secrets and Lies," which won the Palme d'Or at the Cannes Film Festival in 1996. His latest film, "Mr. Turner," starring Timothy Spall as the painter J.M.W. Turner, is also being shown.

The base of the festival will be Formula Kino Gorizont, but documentaries like "One Rogue Reporter," about British tabloid hack Richard Peppiatt, who revolted against his newspaper, will be shown at the Documentary Film Center.

Another top documentary to look out for is "Looking for Light," about photographer Jane Bown, who worked for decades for The Observer newspaper and took photos of Samuel Beckett, Queen Elizabeth, The Beatles, Bertrand Russell and Mick Jagger.

Other films to look out for include "God Help the Girl," directed by Stuart Murdoch, one-half of Scottish indie pop group Belle & Sebastian, and "Pride," the true story of when the LGBT movement offered help to striking miners in 1980s Britain.

The New British Film Festival also has programs in St. Petersburg and Novosibirsk.