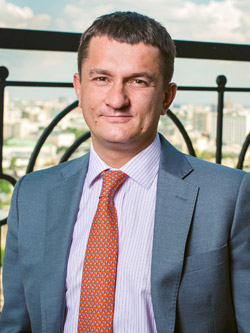 The geopolitical and economic changes that Russia is currently undergoing open a wide range of investment opportunities. The key result of the reduction in oil prices and introduction of sanctions for Russia has been the devaluation of the ruble. As a consequence, ruble assets have become considerably cheaper and attractive for foreigners. The ruble quotation is down by more than 25 percent. This has made the market admission price considerably cheaper for new investors in the real estate, production and consumer market sectors. Unlike the Eurozone countries, the flexible currency rate allows Russia to devalue national currency if required, stimulating local manufacturers.

The real estate sales volumes of the largest companies in Russia (for example Etalon, LCR Group etc.) in 2014 increased by more than 20 percent. In the consumer sector, the largest Russian retailers (Magnit, Lenta, X5 Retail Group) show income growth rates in the current year by 20-35 percent. For western investors such rates of growth are fantastic. If we look at the finance sector, there has been a serious rise in interest rates in 2014, whereas the demand for foreign exchange funding remains at a high level.

The financial market has become more interesting both for foreign financial companies, which are funded as before in the western markets under low interest rates, and for local clients, who are ready to provide financing in the form of deposits, purchase of bonds.

A year ago, it was difficult to find a bank in Russia, which offered foreign currency deposits at interest rate of 3-5 percent; today we can find rates of 7-8 percent in the market. As for the share market, the Russian market currently is one of the cheapest in the world (i.e. now is the most suitable time for direct and portfolio investments). According to trading multiples, Russia is currently cheaper than many foreign markets. For example, according to the MICEX index, the current P/E rate is two times lower than the similar rate of Nigeria, and three times lower than the rate of Kuwait. The current capitalization of Gazprom, the largest gas manufacturer of Russia, is lower than LVMH (Moet Hennessy Louis Vuitton), while the Russian company has four times more income.

The geopolitical crisis in our country is a temporary phenomenon, as Russia is one of the key factors of stability of the global economy. It is the largest exporter of oil and gas in the world, catering to more than 20 percent of gas consumption in Europe. Russia is a producer of nickel and palladium, which are used in electronics, medicine, and for manufacturing batteries, etc. The economic isolation of Russia is next to impossible.