At the height of the uprising by pro-Russian rebels in eastern Ukraine this summer, a handful of human rights workers recorded that Russian soldiers had been killed on the battlefield, even though the Kremlin said its troops were never there.

It was typical work for activists from the group Memorial, which has emerged since the fall of the Soviet Union as Russia's most important human rights organization mainly by taking notes.

Memorial was founded by Soviet-era dissidents to document the historical crimes of the communist dictatorship's gulag. It came into its own during two wars in Chechnya in the 1990s and early 2000s, when it sent teams of researchers into the conflict zone, documenting the disappearances of civilians whose cases would otherwise have gone unrecorded.

It has always been risky work: One of Memorial's board members, Natalya Estemirova, was kidnapped and killed in Chechnya in 2009 while researching allegations of abuse by pro-Moscow authorities there. The crime has never been solved.

But even though the group has clashed with the Kremlin on so many occasions, the authorities never actually tried to shut it down — until now.

Last month, the Justice Ministry announced that it had appealed to the Supreme Court to have Memorial "liquidated" for what it described as repeated violations of the Russian constitution and Russian law.

For Oleg Orlov, one of the group's founding members, the push to shut down Memorial shows that the Kremlin is determined not only to stifle dissent in the present, but to control the past.

"Kremlin propaganda needs to show that Russia has always moved from victory to victory. In these current conditions of propagandistic hysteria, we're simply not needed," Orlov said.

Digging for the Truth

Controlling the narrative has been the foremost weapon of war for Russia in Ukraine since it seized the Crimea region in March. The Kremlin insisted from the start that its own troops were not operating in Ukraine, first in Crimea and later in the eastern provinces seized by heavily armed pro-Russian rebels.

It is easy to see how that work might anger the Kremlin. But some Memorial activists say the group's documentation of the crimes of the Soviet era, when millions perished in the gulag prisons of Josef Stalin, is as dangerous to Putin's mythology as its work on present-day events in Ukraine or Chechnya.

In 2012, when Putin returned to the presidency after stepping aside for a term as prime minister, he passed a law requiring all organizations that receive overseas funding and have any involvement with politics to register as "foreign agents." Memorial was tarred with that label, with its implication of disloyalty, last year.

As Putin's approval rating soars, Kremlin-controlled media have increasingly trumpeted the victories of Russia's Soviet past. Enemies, like the government in Kiev, are being tarred with words used to describe the Nazis that the Soviet Army defeated in World War II.

Little surprise then that graffiti scrawled across the door of Memorial's Moscow headquarters this year read: "fascists." 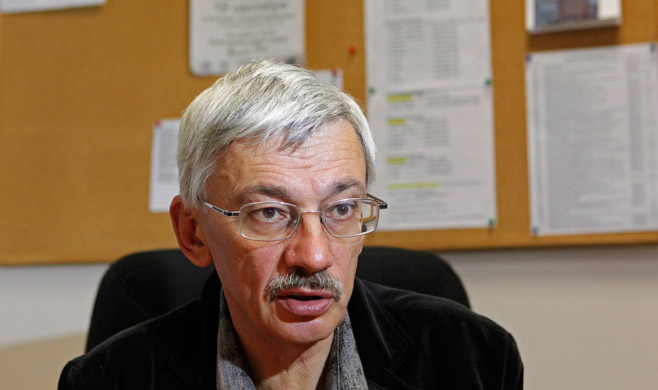 Memorial head Oleg Orlov speaking during a 2012 interview in his office.

'No Need for Tragic Past'

Those like Memorial who point to the dark side of Russia's Soviet history say they are finding their message increasingly unwelcome. At the former Perm 36 labor camp in the Ural Mountains, the only gulag prison still standing, activists have opened a Museum of the History of Political Repression.

Robert Latypov, a regional Memorial representative said local authorities were trying to cut back the museum's activities, which include an annual gathering of former prisoners and dissidents.

"We work with a very tragic history, the theme of political repression, and through the prism of that tragic past we try to talk about the need for human rights and democracy," he said.

"But the authorities have no need for a tragic past. They only want a proud past to boost patriotism and boost Putin's own popularity ratings," he said by telephone.

After Putin returned to the Kremlin, a presidential human rights advisory council was revamped to add a number of pro-Kremlin figures, including the chief of the parliamentary foreign affairs committee, Alexei Pushkov, now on a U.S. sanctions list for his role in Ukraine policy.

Last week, Putin presided over a televised session of the council. He used the meeting to criticize international human rights groups for failing to note abuses against Russian-speakers in eastern Ukraine.

"Unfortunately, many international human rights organizations have closed their eyes to what is happening, hypocritically turning away from what is happening," Putin said in the gilded state hall during a live broadcast. The speech was followed by comments from council members who raised allegations of human rights abuses by Ukrainian troops.

Memorial's Krivenko is a member of the council and was there for the meeting, but did not get a chance to speak.

"It was a scandal. Putin wants a human rights organization that he can use to show that he cares about rights and show that problems are being addressed, and one that won't deviate from his political message," Orlov said. "That's not who we are."

Russia's Justice Ministry has filed a claim with the Supreme Court seeking the liquidation of the Russian Memorial Society, an independent human rights...
Sanctions evasion

Russia will formally annex four regions of Ukraine its troops occupy at a grand ceremony in Moscow on Friday, the Kremlin has announced, after it suggested...