When Cosmopolitan magazine came to Russia in 1994, it had its work cut out for it.

Russia was a country with entrenched gender inequality and no beauty or fashion industry to speak of, but it had a hunger for Western mass culture.


Favorite book: "The Brothers Karamazov," by Fyodor Dostoevsky (1880) "Because it's as sad as the Russian soul."
Movie pick: "The Godfather," directed by Francis Ford Coppola (1972) "Because to make criminals so romantic is art."
Favorite Moscow restaurant: Saxon + Parole, Spiridonyevsky Pereulok 12/9. "Cool cocktails and barmen."

Twenty years later, the domestic edition of Cosmopolitan remains Russia's biggest glossy magazine, with a print run of 800,000 and a readership of 6 million, according to its own figures.

"The only ones to rival us on circulation, to my mind, are television guides and health and gardening magazines," says Polina Sokhranova, the editor-in-chief of Cosmopolitan Russia, which is published by Sanoma Independent Media, the owner of The Moscow Times.

Russia has changed a lot in the past two decades. Its beauty industry, for example, was estimated by Forbes Russia a few years ago at $7 billion and is growing between 15 and 20 percent a year.

Gender equality remains elusive, meanwhile: The country ranked an unimpressive 61st of 133 countries in the World Economic Forum's 2013 Global Gender Gap Report. No less than 72 percent of the population believe women should prioritize family over career, according to a poll by the state-run VTsIOM from March (which, oddly, gave no gender breakdown).

Political and civil unrest — which began with a sudden eruption of street protests against alleged election-rigging in late 2011 — has also spilled into the glossy magazine industry, at least on the male side, with publications such as GQ, Esquire and Maxim dabbling in articles throwing jabs at the ruling establishment and even running the occasional interview with opposition figures.

Now, anti-Western and traditionalist sentiment is on the rise, fueled by jingoistic rhetoric over Russia's standoff with Ukraine.

This, along with the Kremlin's efforts to stunt the emergence of real political opposition, has already led to cultural censorship in arts, media and the internet, and affected perfectly apolitical foreign businesses such as McDonald's, which saw a string of its Russian restaurants closed over sanitary technicalities amid an ultrapatriotic backlash against Western values, of which the chain is seen as a symbol.

Cosmo Russia — another household name for Western culture — has every chance of ending up in the line of fire of the alleged cultural war.

But the magazine is sticking it out, Sokhranova said, continuing its mission to entertain while also doing its best to promote women's rights in the country — and without getting into politics.

And so far, the audience is sticking with it, many remaining faithful readers since 1994, said Sokhranova, a short, lively woman with contagious laughter and a dress sense notably unshowy for the head of a publication so focused on fashion.

The Moscow Times sat down with Sokhranova ahead of Cosmopolitan's 20th anniversary — marked with a Russia-wide roadshow set to wrap in Moscow this Saturday — to talk about vital Cosmo topics, including buttock exercises, the Cosmo sisterhood mission and sex tips with toothbrushes.

Q: Cosmo is the most popular magazine in Russia. Why?

A: I think it's the same in Russia as it is in America. We are a service magazine. Unlike most other glossies, we offer reality, not a dream. It's beautiful clothes, beautiful cars, dream jobs, but what Cosmo means with it is "this can be your life."

Our models wear dresses available in your region that cost, say, 3,000 rubles ($80). Or we show how to shape up without going to expensive gyms — we look up YouTube tutorials by Madonna's personal trainer, for example, and mine them for tips on how to sculpt a divine butt without leaving the house. I'm interested in those kind of stories myself, even though I could afford expensive gyms or shoes. Everyone likes freebies.

We're also more focused on the positive. Even when we tell a sad story, it has a positive twist to it. If we write about being tired of your job, we'll give tips on how to revive interest in what you do. If we write about a woman in an ugly situation, even a war, we'll still show how she remains a woman and finds a way to make peace with the world.

And lately we are investing much effort in what the Americans call the "Cosmo sisterhood." There is this stereotype that an all-female collective is horrible, all intrigue and whatnot, but I realized when I went to a meeting of editors of Cosmo's more than 60 editions worldwide that there is a lot to be said for the all-female community.

We are really hooked on the sisterhood idea, because Russian women never had it easy. Feminism is vilified and misunderstood here. Everyone thinks feminists are rude quasi-lesbians with butch haircuts. Because of that, there is no platform for support, communication, inspiration, even education, even though we're out of the Domostroi world, and we're trying to supply that.

[The Domostroi is a 16-century Russian household/ethics guide promoting patriarchal values, a byword for radical traditionalism and gender inequality in Russia. — MT.] 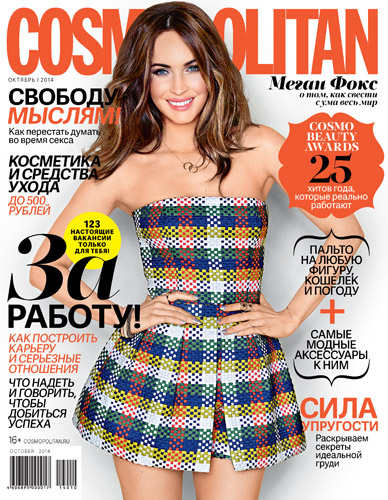 Q: You don't cross into politics?

A: No. We do social, not political activism. We could do a story about, say, a Russian-Ukrainian family torn apart by the two nations' conflict, but even then it would be a personal not a political story.

We have a story in the upcoming anniversary issue about a woman working at a Ukrainian military base in Crimea who was stuck there for a month when Russian forces blocked the base [during Russia's annexation of the Ukrainian peninsula in March]. But we don't talk about her thoughts on [President Vladimir] Putin. We talk about how her kid's waiting for her at home, and what she does to go see him.

We don't go into politics and it doesn't come to us, either. But there are certain trends, such as the resurgence of family values, which are too big not to react to. We have, for example, progressive women in their 30s with established careers but little in the way of private life, and they are hooked on lectures about how to bring out their feminine side. Things like that come together in a major trend, and you can't just ignore it.

Q: Is there anything special about the Russian edition of Cosmopolitan?

A: Russia belongs to a conservative group of countries, like China or the Middle Eastern nations, where sex stories, for example, often cause controversy. It is worse in the Middle East, where they have to package sex into stories about relationships to get away with it. In China, they realized at some point that they can't show men and women in how-to tutorials — you know what I mean — and so they replaced humans in the pictures with toothbrushes.

In Russia, advertisers are also on the fence about such stories, and people often complain loudly about those features — though we suspect that while they complain online, they nevertheless read and learn in private. But we'll go on talking about sex in Russia [laughs]. It's the signature of the brand.

Another thing is that we've got a lot of people who started reading us in '94 and never stopped — because it is a habit, because they like it, and because in some corners of our vast fatherland there aren't many alternatives. These people have children by now, who also read Cosmo. So like a hundred-dollar bill, we've got to be liked by everyone.

Q: How hard is that?

Q: What are your and your audience's favorite sections of the magazine?

A: That is two very different things. I positively adore the "Inside His Head" section — our men's manual. How to decode what he's thinking, what he means, what not to tell him and when to talk to him about money. A real riot, this one.

Our focus groups show the readers are okay with this section, but it's not their top favorite. They are totally crazy about psychology — anything about quirks in their heads — as well as beauty and fashion. That's the top three; after them, it's the love and relationship section, and career.

Q: You have a considerable male readership. How come?

A: Studies show up to 20 or 30 percent of our readers are men. On my first day here, I was riding to work in a taxi, talking on my phone, and the driver overheard me and asked me when I was done if I work in media. I said, "Cosmopolitan," and he actually let go of the wheel and went all: "Cool!" [laughs]. I don't think you get it with any other women's magazine. But basically: like we try to decode men, they read us to decode women.

Q: What about the business side of things, and your editorial input?

A: I'm a newbie, I only joined last February, poached from The Interview magazine. Now I realize that back then, I had no idea what I was doing, but I went down to [Cosmopolitan brand owner] Hearst Corp. headquarters [in the United States], and when I came back, my art editor told me, "you've got a goal shining in your eyes." The job's awfully scary, but incredibly fun, and we have a great team, all 25 staffers. Sometimes I think, be careful what you wish for, you just might get it — but I still call up my friends every now and then and say: I have the best job on the planet. Millions of girls would kill for this job.

Any editor change is shock therapy, and this time it came complete with a redesign and many marketing activities to mark our 20th anniversary. But in a nutshell, despite all the celebratory effort, at the end of the day it's the usual ad spreads that pay our bills [laughs].

Coverage-wise, we are trying to make the magazine more vibrant. We did a story about young girls with [neural disease] multiple sclerosis, for example, it was a smash hit on the website. The [glossy magazine] market in Russia has evolved so much from 2006, when I was just starting, and I have a feeling you can't get by just on celebrity coverage anymore.

We are writing about evergreen topics like relationships, but what I really want is to make it a magazine about people who live here and now. Take the relationships thing, for example — on the one hand, long-distance becomes easier with Skype and all that, but on the other, people are getting dumped by text messages. My main job is to find the right angle to reflect these things.

And I also want to show the heroines of our time. They are many, and very different throughout the nation. But if I were to describe her, describe a Cosmo reader — well, she is beautiful, she wants to go out and be in the know, she wants sports and hobbies and cooking, but also an occupation beyond the family.

It may just be studying or even a librarian job, makes no matter — just something to call her own. Too many women in Russia think marriage is their ticket to freedom. I think that is wrong, and it will change.

Geopolitical turbulence or not, Moscow's City Hall will plod ahead with plans to double the share of private competitive investments into the city...
'justifying terrorism'

Bulgarian investigative journalist and director of the Bellingcat investigative reporting group Christo Grozev is being forced to relocate from Austria...