ST. PETERSBURG — Blue, red, yellow, green and gray. These are the colors of recycling bins throughout Europe that help the average person throw their used recyclables into the correct pile.

However, this cost-effective and socially beneficial program for providing healthier urban living environments and less stress on overflowing landfills is still in its naissance in Russia.

But Sofya Klimova, coordinator of RazDelni Sbor, and her team of energized recyclable collectors are nurturing the separated trash collection movement in St. Petersburg and mobilizing their more than 15,000 supporters as quickly as possible, especially now that a local government proposition has planned to build up to seven new waste-burning facilities within city limits.

Once a month, Klimova and her team organize more than 20 collection sites throughout the city where locals bring carloads of their own recyclables, as well as their family's and friends'.

But what happens once the trash is collected?

"We have to separate it by ourselves. And then we take one type of recyclable to one company and another type to another company," Klimova said in an interview.

There are currently privately operated recycling facilities in the city that recycle one or two types of recyclables each, but no one plant recycles everything, which makes delivering separated trash to recycling centers more difficult.

In opposition to the threat that waste-burning sites pose to residential area air and water quality, RazDelni Sbor hopes to convert more people into recyclers. They hope to do this by spreading the word on the simplicity of adopting the habit of separating trash.

"We spend one minute twice a day brushing our teeth and don't cry over it, so you can also separate your trash into two or three bags, and it's not a big deal," Klimova said.

"It's a culture, not a cult. St. Petersburg is a cultural capital, and we have to be cultural with our waste management," Klimova said, adding that in reality, recyclers tend to be ordinary people of all ages who are becoming cognizant of the amount of waste they are accumulating as modern consumers.

Another hurdle for local recycling is a lack of savvy. "Sometimes people are confused with the idea of recycling label codes. They know 'plastic,' 'glass' and 'paper.' So when we tell them that there are seven different kinds of plastic, they panic," Klimova said.

But changing the minds of the public is still a small battle compared with the one that RazDelni Sbor faces with a local government document proposing a general plan for the city's sanitation. In the document, government officials have proposed building up to seven trash-burning sites within city limits, including in the Vyborsky, Kolpinsky, Krasnoselsky, Pushkinsky and Yanino districts, among others.

"Residents are not well informed about waste management. In the government documents, the plants are called 'waste-recycling plants,' but this actually means producing refuse-derived fuel from waste. This fuel contains plastic, and burning plastic is never a good idea. With this kind of rhetoric, even the government officials are not well informed about the harm of burning mixed waste for their health," Klimova said.

She also said these burn sites come with financial consequences for local taxpayers. "Almost all the funds will be from our pockets. The local government has to build them, buy expensive filters and maintain the sites throughout the duration of their use. If instead they elect to replace those plans with plans for recycling plants, they don't have to build them themselves because there are companies that will do it for profit."

Klimova and her team have since been lobbying for more support of privately owned recycling centers. And their motivations seem logical given that recycling is already big business in many parts of the world.

"Plastic waste is a currency. It's pound-for-pound worth more than steel," said David Katz, founder of the Canadian-based Plastic Bank.

Klimova said that the local government has used several pilot programs to test the viability of collecting recyclables in the city, but that they either were not properly executed or not extensive enough to give conclusive evidence. 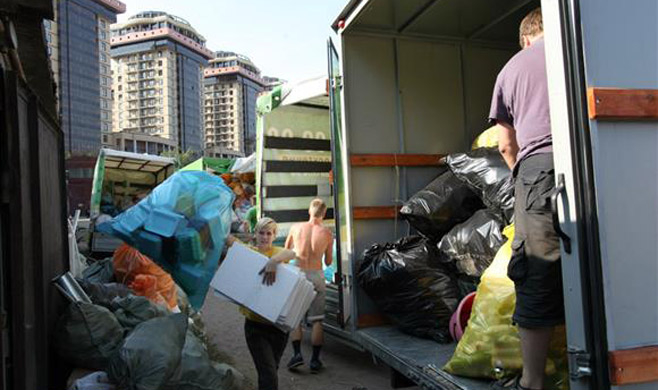 Once delivered, the garbage is sorted out and separated for recycling.

She admits that current capabilities of local recycling centers are not without problems. Last year one of the local glass-recycling plants malfunctioned and for some time could not accept clear glass, only green and brown.

However, she said the majority of local recycling problems lie in the inconsistent flow of incoming recyclables. Local recycling companies receive almost all their input from large corporations that use recycling to generate a profit from their waste, and these companies often have gaps in their trash outputs that cause a problem for managing recycling.

But Klimova believes that this problem would be greatly reduced or even eliminated if recyclable trash were collected from locals in an organized manner. She believes that once the flow has stabilized, other recycling companies will quickly enter the market.

Looking abroad, recycling programs have proven successful for many governments. City officials hoping to reduce sanitation and waste expenses while boosting employment can look to other cities to witness the success of recycling programs.

"Good environmental polices create jobs — and lots of them," said Piotr Barczak of the European Environmental Bureau. A study by his organization found that an ambitious waste policy in Europe would create more jobs by 2025 than what the European Commission claims would be generated from its trade with the United States.

The U.S. state of California has 4,342 recycling and reuse centers that employ more than 84,000 workers and generate a payroll of $2.25 billion in annual revenues. And for every job in recycling collection, eight more jobs are created through manufacturing the recovered materials into a new product, according to a study done by Stanford University.

And the good news for city governments doesn't stop there. Given the energy cost analysis of recycling versus raw materials, the construction of new recycling plants seems a logical way for the government to increase energy efficiency without compromising production. Aluminum, for example, requires 95 percent less energy to make from recycled cans than it takes to process from bauxite.

Klimova said that there is a growing number of small-scale initiatives for recycling, and that the residential participation in RazDelni Sbor's collections continues to rise. In September last year 900 people brought recyclables to collection points, and last month it was up to 2,500 with no slowing in sight.

She hopes to continue to see more community participation in the movement. "We are requesting more volunteers and not just for waste collection. We need businesspeople, lawyers, designers and media specialists. We need people from all areas."

These grassroots recycling programs in the city are helping interested locals by providing new opportunities for trash disposal and giving practical guidance on residential trash management. And visionary local leaders and innovative practitioners seem to show that separated trash collection in St. Petersburg is an achievable goal.

If you're looking to recycle in Moscow, see http://recyclemap.ru/2life.php to find recycling collection centers in your area.

A photographic tour inside the cathedral, revealing its beauty and secrets.