A series of posters aiming to criticize America's policy on Ukraine by likening U.S. President Barack Obama to various animals have been pulled down in the Perm region following the launch of an investigation by local prosecutors, a Russian news report said Monday.

One poster featured Obama pictured with a large banana. The president appeared to be chewing vigorously. The banana was labeled "Ukraine." The words "Banan-Obama" feature prominently at the top of the poster, along with the phrase, "Don't choke!"

Another poster featured a sheep whose wool was painted to resemble the U.S. flag. The sheep stood below the heading "Baran Abama." In Russia, the word for sheep is "baran." The heading thus seems to have been a nod to the president's full name, Barack Obama. The phrase, "Get your hooves out of Ukraine! We don't abandon our own," was strewn across the base of the poster. 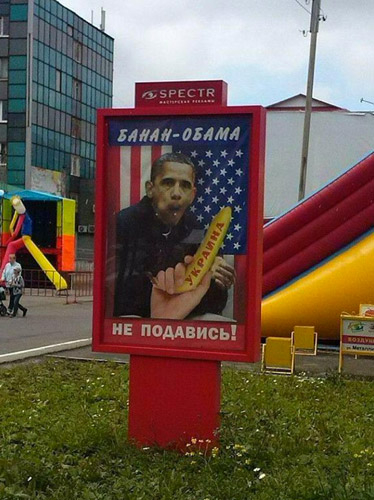 Another poster with the words "Banan-Obama", a large banana labeled "Ukraine" and a phrase "Don't choke!" at the bottom.

The head of a local advertising firm, Mikhail Vasilkin, took credit for the posters, telling online news portal Newsru.com that he had erected them to express his personal discontent with U.S. affairs.

"The posters have been up since practically winter. Now, since the Federal Anti-Monopoly Service and prosecutors launched an investigation into them, we have taken them down. With these depictions I was trying to get across my stance on current political events, so it is unlikely they would fall under the category of advertisements," Vasilkin said in comments carried by Newsru.com on Monday.

Photos taken of the posters after they appeared on the streets of Perm quickly went viral. The politically incorrect portrayals of the U.S. president polarized Twitter users, with some welcoming the signs and others denouncing them as shameful.