Russian fans may still be reeling over their squad's early exit from the World Cup, but Dynamo Moscow's youth team players are already looking ahead to the 2018 tournament in the hope that their national team will redeem itself on home soil — and that they might even help it to do so.

"Some kids move here from different cities because the level of competition of the Moscow championship is much higher," said Filipp Sokolinsky, coach of Dynamo's under-14 team, which includes six non-Muscovite 14-year-olds who dream of representing Russia internationally.

"In Moscow, games are always being played between the top clubs: Dynamo, Spartak, CSKA, Lokomotiv. Players develop more quickly in this environment than if they remain in their hometown where there is no serious competition," said Sokolinsky.

Russia's professional club teams, including Dynamo Moscow, have selection committees who scout players nationwide. Some of their prospects can be as young as 5 years old. The clubs keep a database of players they have scouted and consult it to fill gaps in their rosters. Talented young players such as 13-year-old midfielder Luciano Bobrov are also lured from other clubs.

"I was playing for Khimki [a club in the Moscow region] and we were playing against Dynamo that day," Bobrov said. "The Dynamo coaches saw me play and asked if I would be willing to join the club. I agreed because it was a chance for me to play for a better team."

The Lev Yashin Football Academy, which has trained some of Russia's best talent — including defender Dmitry Kombarov and striker Alexander Kokorin, who represented Russia at the World Cup — has 12 youth teams of different age groups.

The under-14 team has four 90-minute practices and plays one game every week. The children follow a regular school program but, unlike the average student, they hop on the bus to football practice when the bell rings.

Sokolinsky believes four players on his squad could have a chance of making the Russian national team one day. But for the majority of Dynamo pupils, football is the only desirable career, and a spot on the national team would be the ultimate reward.

When asked what their backup career plan is in case football does not work out for them, three Dynamo pupils conceded that the possibility of not playing professional football had not crossed their mind. They said the costs associated with pursuing their dream — less time to do schoolwork, high demands on the pitch, time away from family and friends — are all worth it. 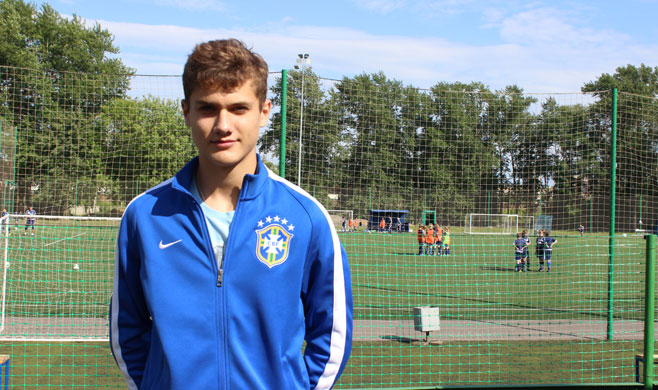 Pyotr Kosarevsky, a Dynamo trainee and goalie for Russia's under-15s.

"Life would be boring without soccer," said 14-year-old defender Vladimir Moskvichyov. "I have no idea what I would do without it."

One of Russia's top prospects following this demanding training regime is Pyotr Kosarevsky, a goalkeeper for the under-15 national football team. Kosarevsky's quick feet and composure hint that the future of Russian football could lie in the hands — or gloves — of this fresh-faced teenager.

"I realize that Russian football is not as strong as German or English football right now," said the 15-year-old, sporting a discordant Team Brazil sweatshirt. "But I will always support Team Russia and Russian clubs. We have great potential."

Football as a Way of Life

But potential and a positive outlook are not enough to guarantee success on the road to the men's national team, a long and difficult coming-of-age process in which talent and hard work do not always equate success.

Cognizant of the improbability that all their pupils will earn a living playing the sport they love, Dynamo's coaching staff emphasizes the discipline taught at the academy as a way of life.

"I put football and school on the same level of importance," Sokolinsky said. "Few kids will become professional players, but educated, well-behaved children can succeed in anything they do later on in life."

Balancing the demands of school and football, Dynamo's pupils also have to manage their expectations for Russia's own World Cup, which it will host in the summer of 2018.

Across the street from Dynamo training facility, the unfinished Otkritie Arena, which is being built to host matches of the tournament, looms in the distance. But only a privileged few trainees will cross the street and represent their country at the most prestigious event.

"It is every player's dream to represent their country at the World Cup," said Sokolinsky. "I think that in four years, at least one of our pupils will be there. Maybe more. Sometimes, fairytales become reality."