There was a buzz of excitement at the open-air cinema at Muzeon Park as a few hundred journalists and fans gathered to meet actors from "Game of Thrones," the HBO fantasy series packed with enough sex and violence for a dozen Vladimir Sorokin books.

Cable television channel Amedia, which broadcasts the series in Russia had excited everyone by promising five cast members were coming to the event last week, including Maisie Williams who plays tomboy wannabe assassin Arya Stark, Sophie Turner who plays Sansa Stark and even Kristian Nairn, the actor who plays Hodor, the giant whose vocabulary consists of one word alone, his name.

Watch the video: Game of Thrones' Yuri Kolokolnikov Speaks to the Moscow Times

To get the crowd in the mood, cocktails the color of the blood that regularly spills in the show were handed out and actors milled around dressed as faux "Game of Thrones" characters.

"I will be cutting all foreign journalists," said one man dressed up in a medieval style uniform and waving a long sword, before clarifying his blood lust, "No I will be attacking all people who ask too many questions."

The undoubted star at the start was Artyom Bobtsov, dressed up as the character Tyrion Lannister also known as "The Imp," and "Halfman," who stood by a model of the Iron Throne, posing with very minor Russian celebrities and journalists.

"Tyrion is a great guy," said Bobstov, an actor, who has appeared in a number of local films and television shows, "Many people compare me to him. They say I look like him, maybe I am, maybe I am not, I do not know."

"I would really like to meet him," said Bobstov of Tyrion, as everyone waited for the cast to arrive.

Then a tall, lanky man in torn jeans and a woolly hat, Yury Kolokolnikov, the only Russian to act in the series, walked in and was soon giving nonstop interviews.

Kolokolnikov plays Styr in season four, a cruel leader who has a fondness for self-mutilation and eating those he has killed. "It was honestly amazing," said Kolokolnikov in an interview with The Moscow Times, "I have never worked in such an epic, such a big production."

"I am a real fan of it but I was really surprised that it is such a big thing here. We do not have this cable culture in Russia but it is great."

As Kolokolnikov talked, pieces of paper at the front of the cinema marked the spots where the other actors were to sit. Williams and Harper were noticeable by their absence. 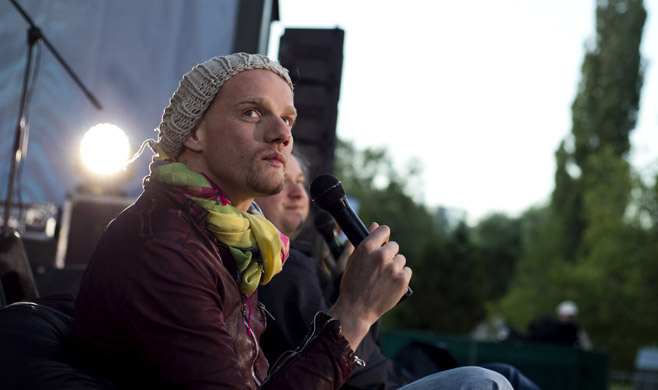 Kolokolnikov, or Styr, at a meeting with Thrones fans in Muzeon last week.

Indeed they never came, nor did anyone else. Hapless host Kommersant film critic Anton Dolin was forced to announce that no one would be there because of plane delays and cancellations, a move that in the series would have seen him beheaded or made into the King's fool at the very least.

With no one else there — Nairn would eventually make it to the opening of the Moscow film festival the next day — it was left to Kolokolnikov to entertain those left with cannibal jokes, "The tastiest bit as everyone knows is the brain," a Russia joke when asked how he was cast, "As you understand corruption is developed in our country"  and some details about filming the series. Stop reading here if you do not want to find out what happens to Styr's character.

Kolokolnikov said he hung out with Kit Harington who plays Jon Snow in the series and who smashes an ax into Kolkolnikov's character's head in the second-to-last episode of season four and Norwegian actor Kristofer Hivju, who plays another battle-hardened character. All three had studied acting with Russians at one time or another.

"We even had teaching acquaintances," said Kolokolnikov.

He spoke of the big fight scene filmed in Northern Ireland, where his character meets his grisly demise, which involved 200 people and took two weeks to rehearse and film. "It was the first time that I took part in such an epic fight."

"Jon Snow fantastically uses a sword but he is already in his third season," said Kolokolnikov, "He has had time to get experienced."

Kolokolnikov was asked if Russian fans' enjoyment could be because the bloody world on the screen has similarities in Russian history. "The whole point is they are making a movie about the whole world. It is not Russia — Russia is part of the world," he said, "It is about relationships because all that big epic vision is just a background, it is about relationships and that is why it is so amazing."

Apart from the death, torture and general brutality, which to be fair could be found in any country's ancient history, the only real link to Russia is the fact that "Game of Thrones" is based on works by one of President Vladimir Putin's favorite authors, Maurice Druron.

The series' author George R. Martin has admitted that the inspiration for the show came from Druron's historical drama about medieval France "The Accursed Kings." Druron was an approved author in Soviet times and Putin met him a number of times before his death in 2009.