Not satisfied with its recent 144 billion ruble ($4.1 billion) tender to supply and service 832 new train cars, the Moscow Metro will run a new one — this time upping the scale to 1,500 cars and an estimated 260 billion rubles ($7.5 billion).

No foreign companies participated in the first tender, but they are clamoring to get involved in the next one, to be held in the next two months, Moscow metro's deputy head Alexander Vaisburd said.

The winner in March was the metro's long-time partner, Metrovagonmash, a subsidiary of Russia's major machine-building concern Transmashholding, which has a giant factory in Mytishchi on Moscow's northern outskirts. Last week, the Moscow Times joined Vaisburd on a tour of the facility, where workers are busy completing the order to replace all of the 700 train cars that service the the metro's Gray Line with new rolling stock by the year's end.

Metrovagonmash had an advantage in that tender — each line of the metro is stocked with a single type of train to make servicing and training easier, and Metrovagonmash has been supplying trains for metro lines including the Gray Line since 2010.

But the upcoming tender, to produce trains for the Purple and Green lines, is different. The metro is looking for a completely new product, and the local boy will have to compete with major global producers such as Siemens, Bombardier, Alstom, CAF and Hyundai — all of whom have expressed interest in the order, according to Vaisburd.

"No one has the ready-made train for this contract — not Metrovagonmash, not Siemens, not other producers," Vaisburd said. "Starting terms are equal for everyone." 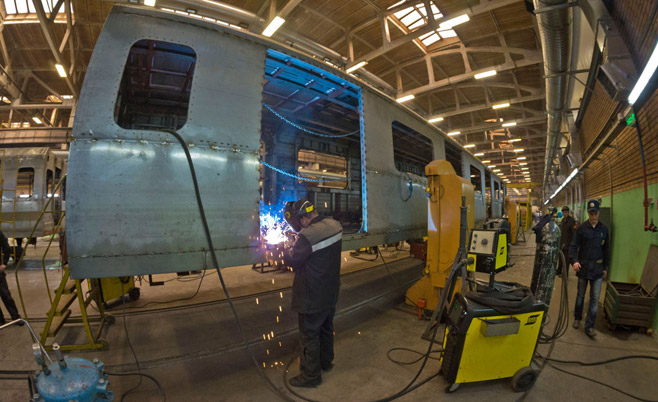 A Metrovagonmash engineer welding panels together on the outer shell of one of the factory’s train cars.

Vaisburd said the base price for the contract will be determined by what the metro currently pays for Metrovagonmash cars, which means the new order will be worth about 260 billion rubles ($7.5 billion), an unprecedented amount for public transport purchases in Russia.

The trains are intended to be supplied starting from the end of 2016 and into the 2020s. The supplier will also be responsible for servicing the trains over a 15-year period.

The list of requirements for the new trains is as thick as the War and Peace novel, Vaisburd said. They should be quiet, comfortable, a modern design and electronic equipment, including an automatic drive system, enabling the human driver to only monitor the ride and the opening and closing of the doors. Another novelty is that they will have folding seats and will be completely walk-through.

Metrovagonmash's deputy engineering director, Yury Karepov, said the company is ready to give foreign competitors a run for their money. Metrovagonmash already applies either its own or foreign best practices in production.

And even if Metrovagonmash wins the tender, international companies will not be cut out of the bonanza — "We make the car bodies and the carriage chassis. Electrical equipment, air-conditioning, brake systems and door automation parts come from leading European producers," Karepov said.

Metrovagonmash trains, while criticized by Muscovites for their simple, square-bodied design, have a good track record in quality. According to Vaisburd, the Moscow Metro — the most intensively used subway in the world — has the lowest breakdown rate, which is because of its reliable machinery.

Senior tennis official Alexander Medvedev slammed what he called a lack of "judicial independence" in the No.1-ranked star's deportation from Australia...
news wrap