Sunday's ballot is taking place despite weeks of fighting in the sprawling eastern regions that form Ukraine's industrial heartland, where pro-Russian insurgents have seized government buildings, battled government troops and vowed to disrupt the ballot.

The election, which authorities in Kiev hoped would unify the divided nation, came three months after the country's pro-Russia leader fled, chased from power by months of protests over corruption and his decision to reject a pact with the European Union and forge closer ties with Moscow.

Yet the question of who was able to vote Sunday loomed large over the democratic process. Some 35.5 million Ukrainians were eligible to vote, but separatists in Donetsk and Luhansk regions — which have 5.1 million voters — have vowed to stop the vote.

Military operations at least appeared to halt for the day but little voting was taking place in the east: The regional administration in Donetsk said only 426 of 2,430 polling stations in the region were open Sunday, and none in the city of Donetsk, which has 1 million people. There was no voting in the city of Luhansk either, but some stations appeared to be open in the Luhansk region, according to local officials.

Polls have shown 48-year-old billionaire candy maker Petro Poroshenko far ahead of the other 20 candidates, but short of the absolute majority needed to win in the first round, so a runoff is expected June 15.

"I am convinced that this election must finally bring peace to Ukraine, stop lawlessness, stop chaos, stop bandit terror in the east," Poroshenko said after casting his ballot in Kiev, where many people wore the traditional embroidered shirts that have become a symbol of Ukrainian patriotism.

"People with weapons must be removed from Ukrainian streets, Ukrainian villages and cities," Poroshenko said.

President Vladimir Putin has promised to "respect the choice of the Ukrainian people" and said he would work with the winner, in an apparent bid to ease Russia's worst crisis in relations with the West since the Cold War and to avoid a new round of Western sanctions.

Many voters appreciate Poroshenko's pragmatism and his apparent knack for compromise, making him stand out in a political environment long dominated by intransigent figures. Poroshenko strongly backs closer ties with the EU, but also speaks about the need to normalize ties with Russia.

"He is a very smart man who can work hard compared to others, and he is also a businessman and knows that compromises are necessary even if unpleasant," said 55-year-old Kiev teacher Larisa Kirichenko, who also voiced hope that Poroshenko will negotiate a peaceful solution in the east.

The long lines at some Kiev polling stations indicated a solid turnout. Overall, about 40 percent of the nation's eligible voters cast their ballot by 3 p.m., the Ukrainian Election Commission said.

Poroshenko's nearest challenger is Yulia Tymoshenko, the charismatic and divisive former prime minister. The 53-year-old blond-braided heroine of the 2004 Orange Revolution, who spent 2 1/2 years in prison on abuse of office charges denounced as political by the West, is still admired by many for her energy and will, but detested by others over her role in political infighting that weakened the country. 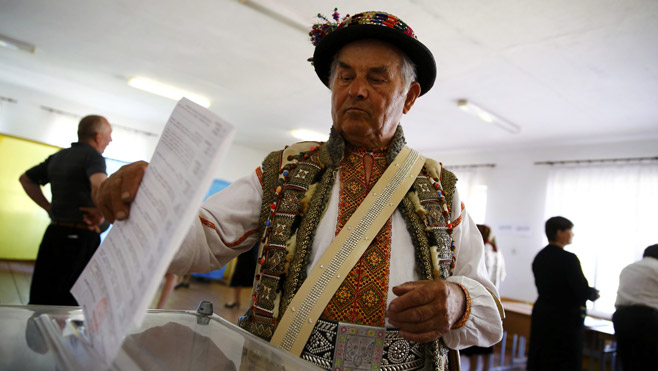 Tymoshenko said after casting her ballot that Ukraine must join the European Union and NATO.

"I am convinced that Ukraine can be strong, happy and prosperous if it becomes a member of the European Union," she said. "It is time to conduct a referendum on NATO membership in order to bring peace back to the country."

Vladislav Golub, a 31-year-old lawyer, said he voted for Tymoshenko because "Ukraine must stop being an oligarchic state and be part of Europe, instead of serving the interests of the Russian Federation."

The interim Kiev government and the West have accused Russia of backing the separatist uprising after it annexed Ukraine's Crimean peninsula in March. Moscow has denied the accusations.

Ukraine and the rest of the world have not accepted Moscow's annexation of Crimea so residents there who wanted to vote were allowed to travel to other areas in Ukraine. It was not clear how many were doing so.

Ukrainian election officials said they have received as little as 26 percent of the election registers for the Donetsk region and 16 percent for the Luhansk region. Ukraine's Deputy Interior Minister Serhiy Yarovyi said police are ready to ensure security at polling stations in just nine of the 34 electoral districts in the east.

In the center of Donetsk, a team of insurgents was visiting polling stations Sunday to make sure they were closed. At one station, Vyacheslav Kucher, 36, tested the front door and gave a thumbs-up sign after finding it locked.

"I am checking to see everything is normal, to see that there is no nonsense, so this junta does not come to power," Kucher said.

Outside the Donetsk regional administration building, which has been occupied by government opponents since early April, a group of masked men drove up carrying confiscated ballot boxes and made a show of smashing them in front of a journalist's camera.

One polling station in Donetsk opened but minutes later a group of gunmen arrived and forced the election commission out, its chief, Nadia Melnyk, told Ukraine's Channel 5.

A convoy of an armored personnel carrier and seven trucks carrying several hundred heavily armed men drove through central Donetsk early Sunday. The gunmen got out of the trucks, stood to attention and shot into the air in jubilation as several thousand supporters cheered them and chanted: "Heroes!"

The Ukrainian Interior Ministry said in the village of Artemivka, in the Donetsk region, gunmen stormed the village council hosting a polling station and set it ablaze.

Some parts of the Donetsk region remain under greater government control so voting could take place.

In the Azov Sea port of Mariupol, 202 out of 216 polling stations were working. Just over a week ago, Rinat Akhmetov, the billionaire metals tycoon who is Ukraine's richest man, had workers from his factories in Mariupol join police to patrol the city and evict pro-Russia insurgents from the government buildings they had seized.

"I want order in this country. We can't continue without a president. We need order," voter Gennadiy Menshykov said in Mariupol.

In the town of Krasnoarmeisk, in the west of the Donetsk region, a trickle of people came out to cast their ballots.

Ivan Sukhostatov, 37, said he had voted for peace in the region.

"We came to show that this whole situation is contrived," he said. "One side are called terrorists, the others get called fascists. But we have no differences between us. We have one faith, we speak one language. We just want there to be peace."