Russia has a history of attempting to use vast infrastructure mega-projects to boost its economy. The Moscow Times looked at the past, present and future highlights of Russia's propensity to dream big.

The bill footed by countries hosting the annual meetings of APEC leaders hovers around $1 billion, but Russia went all out, saying it wanted to boost the economy of its struggling Far East. The city of Vladivostok added a new university campus and a 3.1-kilometer cable-stayed bridge to the sparsely populated Russky Island, but President Vladimir Putin conceded two years later that the development of the Far East was still flagging. 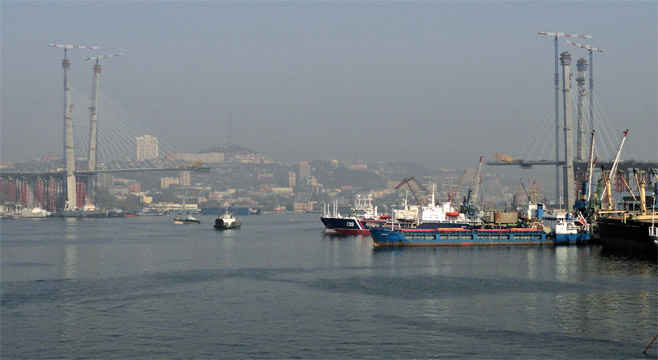 The second-tier sporting event in Tatarstan's capital, 800 kilometers east of Moscow, served as a warm-up for the Sochi Olympics. Authorities were loath to report on the revenues generated by the event, and the republic added $2.5 billion to its debt, but Kazan gained 26 sporting venues and, reportedly, doubled the number of residents involved in sports. 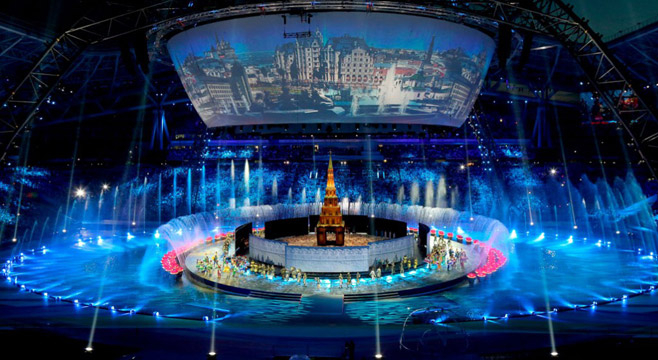 The opening ceremony of the lavishly funded Kazan Games.

A matter of national pride and a great image booster, the Sochi Olympics were as smooth as could be sports-wise — but less so financially. Whistleblowers spoke of embezzlement reaching up to 50 percent of the Games' budget, though officials denied such claims. Three months after the Games, neither businesses nor the state have much use for the Olympic venues, and local administration and hoteliers admitted the city will struggle to make full use of the infrastructure constructed for the event. Ironically, Russia's public relations gains were almost immediately nullified by Russia's meddling in Ukraine's political crisis, while the newly annexed Crimean peninsula will now compete with Sochi for tourists and state support. 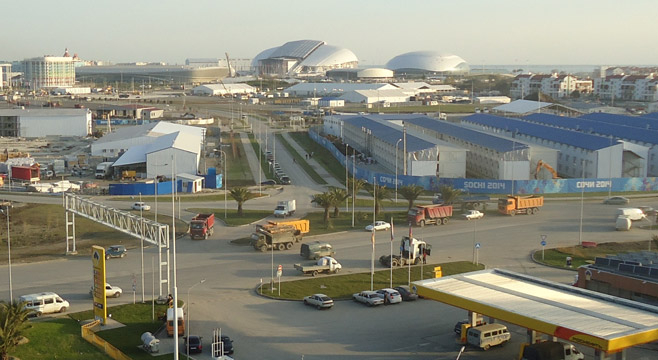 Sochi's Olympic park before the Games.

Where: The Kerch Strait.

Plans to connect the Crimean peninsula to Russia's Krasnodar region have been bouncing around since the 1940s, but everything changed in March when Russia annexed Crimea from Ukraine. The Russian government is serious about the project to connect the now cut-off peninsula to the mainland, but has so far not even mentioned when the investment may be recovered — while already mothballing development projects in in other regions to free up funds for the 4.5-kilometer-long bridge. 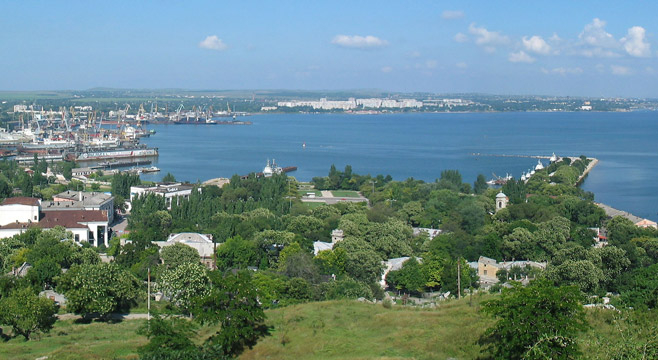 A view over the Crimean city of Kerch on the west side of the Kerch Strait.

The football fiesta is a step up from previous sporting mega-projects in Russia, which were concentrated around a single location. Twelve Russian cities will host World Cup matches in 2018. The building spree could do a lot for the transportation and hotel industries, but mega-projects have a tendency to exceed the initial price tag — Sochi was originally billed at $12 billion, implying that World Cup costs could spiral as high as $80 billion. Brazilians actually rioted recently against the high costs of hosting the 2014 World Cup, and it remains to be seen whether Russians would be more enthusiastic about the sport than football-mad Brazil. 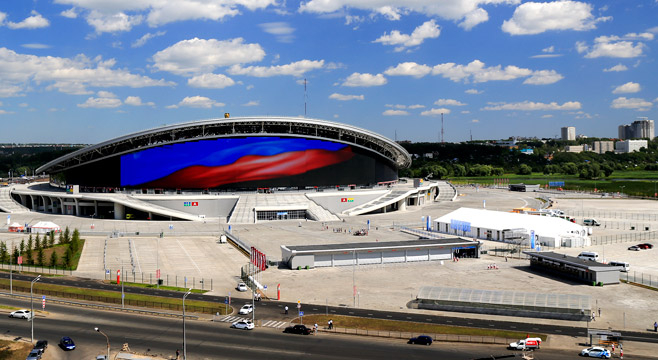 Kazan's arena stadium, which will host world cup matches in 2018.

After two decades of neglect, the Russian Army is overdue for a revamp and overhaul. The government hopes the sweeping rearmament program will also revive the military-industrial sector and have a multiplicative effect on the rest of the economy. But so far, the program has hiked defense spending, which is set to see an increase of 60 percent from 2014 to 2016, at the expense of education and health care, which are set to decrease 6 percent and 18 percent, respectively, over the same period. Economic growth, meanwhile, is grinding to a halt. 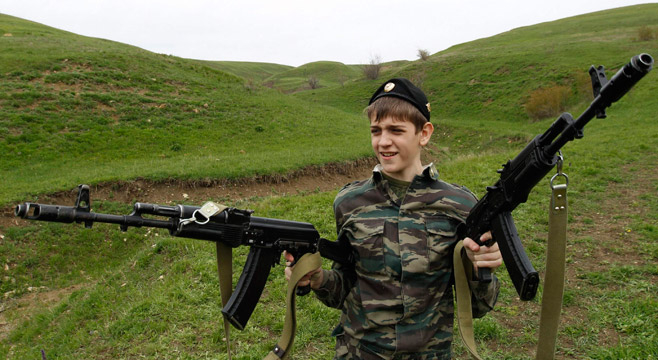 Russia has committed massive funding to its rearmament program.


Coming Down the Line

The most expensive item on the list of seven mega-projects currently being considered for financing from Russia's oil-revenue funded piggy-bank, the National Welfare Fund, the plan would see Russia's state-run Rosatom corporation build a nuclear power plant in Finland, an energy-strapped nation that was the first in the world to commission a new nuclear plant after the Fukushima disaster in 2011. The payback period for Rosatom is estimated at about 20 years. 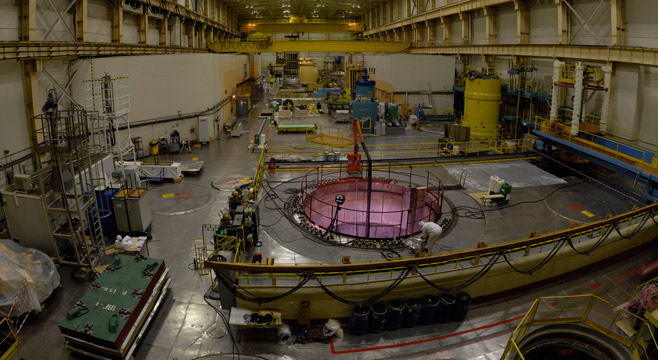 The inside of one of state-owned Rosatom's nuclear plants.

Where: Republic of Tuva, eastern Siberia.

The second-biggest entry on the National Welfare Fund's list of candidates for funding. The deposit by the Elegest River, a tributary of the Yenisei, is estimated at up to 1 billion tons of coal, but a 400-kilometer-long railroad is needed to connect it to the Trans-Siberian Railway, through which the goods can be shipped off to China's power-hungry economy. However, Elegest coal will have to compete with produce from Mongolia's Tavan Tolgoi deposit, which is six times bigger and closer to China. 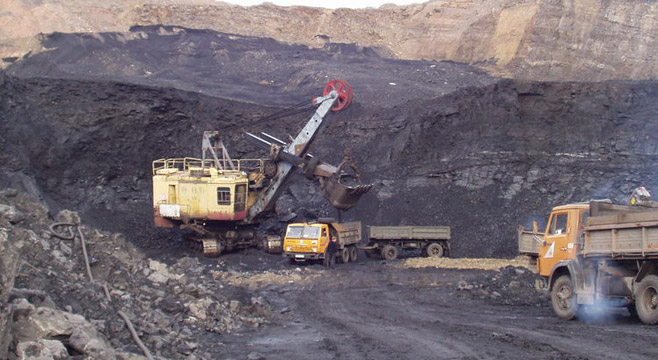 The Elegest coal mines will need a specially-built 400-kilometer railroad to ship out their produce.

The third-biggest entry on the National Welfare Fund's list. Moscow has three airports, all nearing maximum capacity and competing with each other. The airports need to coordinate and effectively function as a single hub — possibly with a single owner — as well as expand and add new airports into the system. But getting the main players to cooperate has so far been like herding cats, and recouping investment in expansion and acquisition could take decades unless passenger tariffs are hiked — something President Vladimir Putin explicitly banned last year. 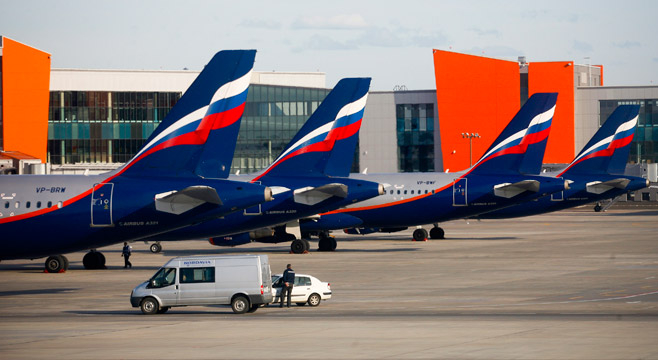 Aeroflot planes standing at one of Moscow's soon-to-be-united airports.

The combined capacity of all Russian ports is less than the capacity of the port of Shanghai. Hence the government's willingness to invest billions of dollars in a major commercial port on the Black Sea in Taman. But that became redundant with the addition of Crimea, which has five deep-water ports, Economic Development Minister Alexei Ulyukayev said earlier this month. The money from Taman will not leave mega-project territory, however — it will go toward Crimea, which will have about $15 billion of state money lavished on it by 2017, according to official estimates. 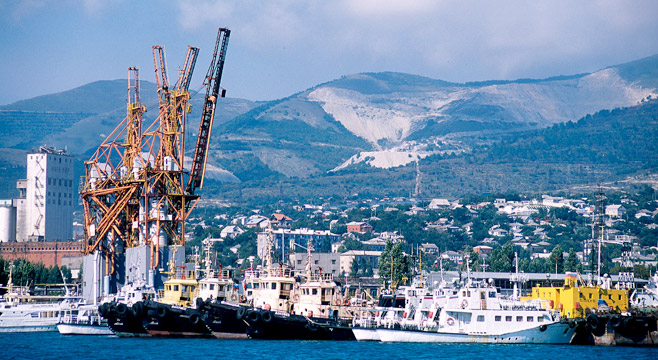 The Novorossiisk Commercial Sea Port on the Black Sea will no longer be augmented by a deep water port in Taman.

Where: Above the Arctic Circle from the Kola Peninsula to the Bering Strait

Russia is on the front lines of a race to claim the Arctic that has been building steam since the late 2000s. Moscow covets the region's abundant natural resources — the Arctic holds up to 13 percent of the world's expected undiscovered oil — and has strategic military concerns in the area, seeing the U.S. just across the Arctic Ocean. However, no federal money is earmarked for the Arctic development program through 2016. On paper, the program runs through 2020, but it remains to be seen how much of the promised $52 billion will be spent over those four years. 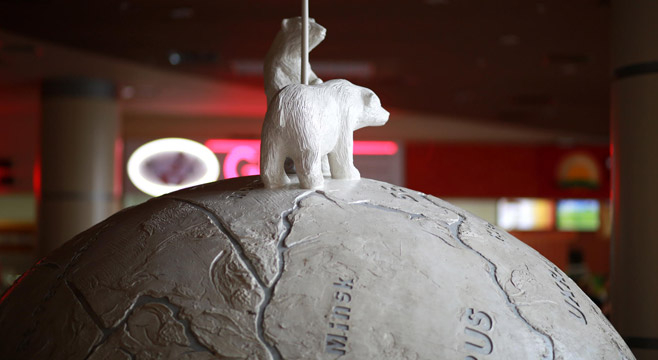 Russia is serious about making its presence felt in the resource-rich Arctic.

The head of Russian Railroads, Vladimir Yakunin, spoke in March about a "Trans-Eurasian development belt," that he promised would be not just an economic cornucopia, but would also free Russia from its ties to the West and preserve its unique spirituality from alien Western values. This was dismissed by most analysts as a far-fetched bid for state money, but as Moscow's relations with Brussels and Washington rapidly disintegrate, Russian officials are increasingly talking of severing the country from the Internet and global payment systems. Perhaps the influential Yakunin, with his close connections to Putin, will yet prove a visionary. 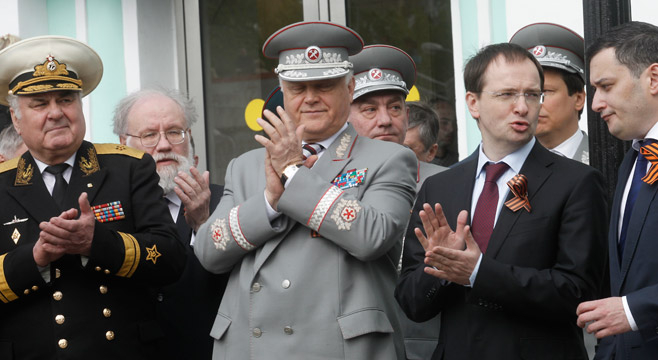 Ukraine and Russia have repeatedly accused each other of shelling around the Zaporizhzhia nuclear plant, the largest in Europe.
ukraine_war

The parliament urged the EU to stop issuing tourist visas for Russian and Belarusian citizens and to cut down on entry visas in general.
navigating the maze