Nearly 11 years later than initially planned, the glass towers of the Moskva-City international business center will finally be completed by 2018, Moscow's chief architect Sergei Kuznetsov said in an interview.

"The project is in the home stretch, we do not have any reason to expect surprises," Kuznetsov told m24.ru in an interview last week.

Moskva-City has had a checkered history. The cluster of skyscrapers four kilometers to the west of Red Square was first proposed by architect Boris Tkhor in 1992, a year after the collapse of the Soviet Union, as the base for a hitherto unseen business community that would help transform Moscow into a center of international commerce.

The plans soon ballooned, from 2.5 million square meters of commercial real estate in the original plan to 4.5 million in the current one. For most of the 1990s, the territory was little more than a hole in the ground. Construction raced between 2004 and 2008, but with the economic crisis of 2008 and 2009, investment stalled and the project along with it.

According to Dmitry Khalin, managing partner of IntermarkSavills, construction was also delayed by the re-evaluation of a number of investment contracts following former Moscow Mayor Yury Luzhkov's exit from City Hall in 2010. The district, known as one of Luzhkov's pet projects, was criticized sharply by his successor Sergei Sobyanin as an "urban planning mistake."

Eleven high-rises have already been built, among them the golden Mercury City Tower, at a height of 339 meters, the tallest skyscraper in Europe. Seven skyscrapers are currently under construction with four more in the design phase. 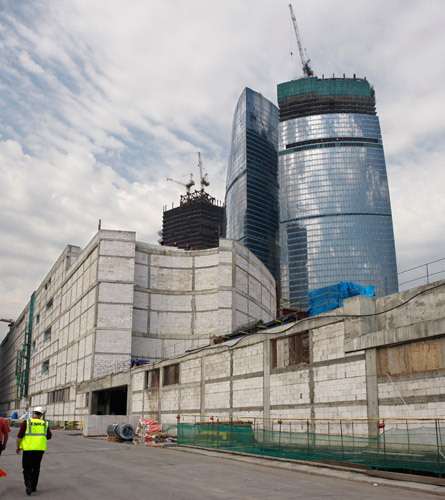 Looking from street level over toward the Federation Tower Complex in 2009.

Moskva-City has already soaked up $12 billion in investment, primarily private funds, said Dmitry Granov, president of the project's management company City. The project will absorb an additional $3 billion by the time it is completed, according to estimates by Contact Real Estate and IntermarkSavills.

The planning of the business center has taken a lot of flak over the years, especially over its notorious inaccessibility. The transportation situation in Moskva-City is still "far from ideal," Khalin said. The two metro stations beneath the complex — Vystavochnaya and Delovoy Tsentr — are essentially the only mode of public transport, he said, adding that parking spaces are few and expensive.

This problem will only become more acute as occupancy of the business center increases, but some solutions are at hand. A transport terminal including a railway station and multi-level parking garage are expected to come into use in early 2015.

However, even if its infrastructure issues are resolved, the habits of international corporations have shifted during Moskva-City's protracted construction period. "Now many corporations are not looking for skyscrapers, but for environmentally-friendly 'green offices,' there is a certain tendency toward low-rise buildings," Khalin said. Foreign companies in particular are not showing much interest in offices and residences in the high-rise district, he added.

But although their model may be an aging one, Moskva-City is still confident in its idols and prospects. "We are oriented towards successful high-rise business districts in London, New York, Paris, Singapore and Hong Kong," Granov said.