As Scotland manages this year's Homecoming celebration and prepares for upcoming sporting events like the Commonwealth Games and the Ryder Cup, Scottish politicians may well be looking to Russia's successful Sochi Olympic Games. However, judging by the controversy surrounding Scottish First Minister Alex Salmond's recent remarks about President Vladimir Putin, they would do well to keep quiet about it.

Salmond might be described as the most un-nationalistic of nationalist leaders.   Though leading the campaign for independence in the September referendum, he insists Scots will still be British, wants to retain the Queen as Head of State and the pound as the country's post-independence currency. In December 2011, The Times named him their "Briton of the Year." Along with London Mayor Boris Johnson, Salmond is arguably Britain's most popular politician.

Salmond rarely courts controversy and remains a left-of-center moderate in most areas of policy. So it was therefore surprising in an interview for the May issue of the London-based magazine GQ — conducted by the former No. 10 Downing Street Director of Communications Alistair Campbell — that Salmond appeared to praise President Putin.

"I do not approve of a range of Russian actions, but he is more effective than the press he gets and you can see why he carries support in Russia," declared Salmond. "He has restored a substantial part of Russian pride and that must be a good thing." The first minister then added: "There are aspects of Russian constitutionality and the intermesh with business and politics that are obviously difficult to admire. Russians are fantastic people, incidentally, they are lovely people."

It must also be pointed out that in the same article Salmond spoke highly of German Chancellor Angela Merkel and U.S. President Barack Obama. But from a news perspective, a campaign cannot function without controversy and Salmond's remarks could not have been delivered at a worse time to provoke outrage.

There was condemnation from the British Foreign Secretary William Hague, while Amnesty International's Siobhan Reardon responded: "Mr. Salmond should reserve his admiration for those worthy of it, not those who trample over human rights and flout international law." 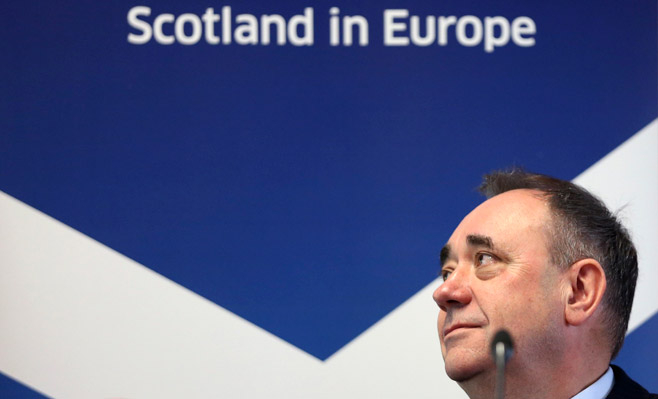 First Minister Alex Salmond has been criticized for his praise of Putin.

Shortly afterwards Pyotr Verzilov, whose wife Nadezhda Tolokonnikova is a member of the Pussy Riot trio, told The Sunday Herald, a Glasgow-based newspaper "We understand that politicians in the West, who do not see the daily human rights violations, the arrests, the persecution of journalists, activists and political figures, the shut-downs of the country's biggest media outlets, might indeed admire some aspects of President Putin's character, like teenagers who become fans of a movie superhero, who they believe to be more powerful than they are."

Lord Paddy Ashdown, former Liberal Democrat party leader and international high representative for Bosnia and Herzogovina took to the pages of the Scottish Daily Record to condemn Salmond. "Once again, he is on the wrong side of human rights groups and civil society. He needs to show he has learned from his mistakes and apologize for these remarks … I know when he says this he does not speak for Scots."

Meanwhile, in Moscow, Putin's spokesman Dmitry Peskov said he "agreed with the viewpoint of the Scottish First Minister," the Daily Mail reported.

Salmond himself, while launching his party's campaign for the European Parliamentary elections in Edinburgh, rebuked any criticism and clarified his position.  "The first thing I said was I didn't approve of a range of Russian actions, by which I meant not just their attitude to Ukraine but also their attitude to human rights, particularly toward homosexuals."

Salmond reiterated his point that Putin had been underestimated by the Western press and what he had in mind was the restoration of Russian pride in the aftermath of the Sochi Olympics and the Paralympics.

It is unlikely that Salmond and Putin share a political common ground and the sort of remarks as expressed by the first minister will likely set alarm bells ringing in the 'Yes' campaign. But they will be quickly forgotten in what is a long independence campaign that has still has more than four months to run.

One of the founders of Russian rock music, Gradsky sang and composed every genre from jazz to opera.