DONETSK/SLOVYANSK, Ukraine — One is a dapper former croupier and promoter of Ponzi scams run by "Russia's Bernie Madoff," the other is a burly Soviet Navy veteran turned soap factory boss, with a shifting gaze and a glint of gold teeth.

In an uprising whose calling cards are the Kalashnikov and the black balaclava, Denis Pushilin and Vyacheslav Ponomaryov have become the unmasked faces of the pro-Russian separatist movement in eastern Ukraine that has plunged Moscow and the West into their most ominous confrontation since the Cold War.

But many in the Donetsk region, including officials who have negotiated with the activists, see the pair as mere fronts for brains behind the scenes: a "puppeteer" in the words of one local Ukrainian mediator; or Vladimir Putin in the eyes of Kiev, which says Russian special forces are orchestrating events.

Pushilin, a 32-year-old who won 77 votes when he ran for parliament a few months ago, emerged this month as leader of the self-styled People's Republic of Donetsk, occupying the regional governor's office in Ukraine's industrial heartland.

Well-pressed suits set him apart from his frumpy admirers and unwashed men in mismatched camouflage on the barricades, as he gives an articulate voice to widely held fears among Russian speakers: Many despise the leaders in Kiev who overthrew Viktor Yanukovych, the Donetsk-born president, and want a vote on letting the industrial east follow Crimea into Russian hands.

"There will be a referendum," is his mantra to small crowds who gather to hear him speak from a stage protected by walls of sandbags and truck tires, topped with barbed wire.

Ponomaryov, "people's mayor" of Slovyansk, a rustbelt city of 130,000 a two-hour drive north of Donetsk, cuts an altogether different figure. Middle-aged, he is much less comfortable around the media, often addressing the ground, his eyes shielded by a baseball cap, occasionally flashing those gold teeth.

He is cagey about his Cold War military service and his business affairs, even his age, but shows greater authority over the gun-heavy separatists who have taken effective control of the entire city. Long feared by officialdom as a haven for crime gangs, Slovyansk looks like the military base camp for the pro-Russian political demands in other towns across the region.

Ponomaryov and Pushilin, who seem largely unacquainted with each other, deny taking orders from the Kremlin or liaising with Russian commandos, who the Ukrainian government and its U.S. and European allies suspect are active under cover, coordinating moves by locals to seize strategic objectives three weeks ago.

"There is not a single Russian soldier or an active member of Russian Armed Forces in the Slovyansk area, and no contact with Russian authorities, its state security services or military," Ponomaryov said — though he did broadcast an appeal to President Putin at the weekend asking for Russian troops to protect the city from "fascists" after three of his men died in a gunfight.

The mayor said his own military career ended in 1991 with the collapse of the Soviet Union. He had served in a "special operations unit" of the Arctic-based Northern Fleet. In civilian life, he said, he ran a factory "and then I had my own company."

"Now I own another company," he said. "It produces soap."

For a small businessman, he commands considerable respect among many of the armed men manning checkpoints around the city — some 2,500, he reckons — including men Ponomaryov calls "volunteers from Russia" and other former Soviet states.

Casually dressed in jeans, T-shirt and hoodie, reluctant to shake hands and missing two fingers — a sawmill accident, aides say — he growls at underlings in ripe, street language and moves between his bodyguards with a rolling, fighter's gait.

Though he is elusive about the wider command structure in the region, he said: "We are maintaining contacts at all levels, with all towns and cities in the Donetsk Republic."

Where Ponomaryov's authority seems less certain, however, is among the brisk, clearly professional soldiery concentrated at the headquarters of the SBU security service, men with better weapons and less of a line in chat for reporters or local kids.

It is these masked men, some sporting Cossack lambskin hats or unruly beards, who draw comparisons to the "little green men" who appeared in uniforms lacking insignia in Crimea last month — as if from Mars, if one believed Moscow's denials of involvement.

Monitors from Europe's OSCE security body say they see signs of a Russian troop presence — but have no concrete evidence.

In Donetsk, a city of a million going about its business untroubled by the makeshift camp in the regional government building, the environment is much less military.

Pushilin is no guerrilla commandant, though like Ponomaryov he also relates a personal journey to political action against the "Kiev junta" that he insists owes nothing to Moscow.

Born locally, he graduated in engineering. After military service, he drifted from security guard to casino croupier, ad man and candy salesman before promoting new financial products for famed fraudster Sergei Mavrodi: "the most honest man in the world," according to Pushilin. He ran for parliament for a party called MMM, a name notorious for the Ponzi pyramid schemes by which Mavrodi ruined thousands of Russian savers in the 1990s. 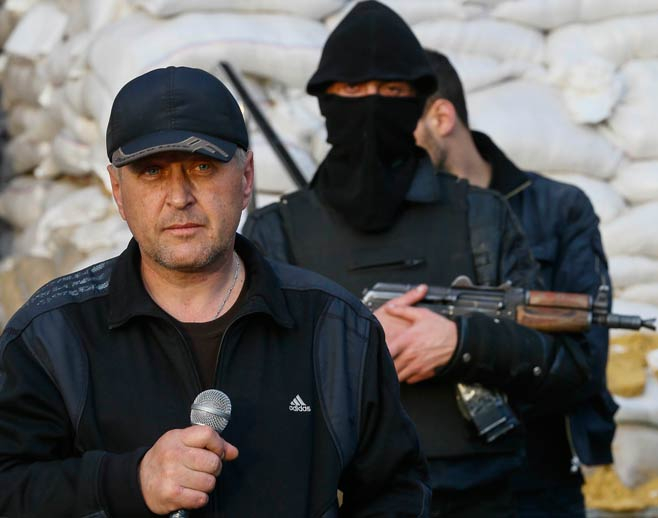 Vyacheslav Ponomaryov, the "people's mayor" of the city of Slovyansk.

He won less than 0.1 percent of the vote but was inspired to offer his services as "people's mouthpiece" after pro-Russian militants seized the regional government offices on April 6.

He puts his rapid salesman's patter to use, holding court to reporters on the top floor of the Soviet-era tower and keeping fellow members of the "people's soviet" on-message: A roll of the eyes or a gesture silence those who stray from the script.

Democracy, he says, is the key. Pushing for a referendum on May 11 — though it is far from clear how any vote can be held — he says annexation by Russia is not a foregone conclusion: "The question will be sovereignty, yes or no," for Donetsk, he said.

"Afterwards we will decide what is best for us: staying with Ukraine, becoming part of Russia, or whatever."

An attempt to seize power in Donetsk in early March fizzled and a previous "people's governor" is now in jail — explaining, aides say, why Pushilin shares out some responsibilities.

Now, however, Ukraine's government seems paralyzed by the uncertain loyalties and poor resources of forces on the ground — and by fear that any casualties may provoke Russian to step in.

Nonetheless, Ponomaryov and Pushilin do not look like masters of their own destiny. Some observers say that, as in Crimea, those in the spotlight have been drawn from the obscure wings of an existing pro-Russian political camp to speak lines dictated by Moscow and, perhaps, by powerful local interests.

"They are well-known marginal forces … that are now being used as functional figures to voice and represent the positions of the organizers of this separatist spectacle," said Volodymyr Kipen, a leading political analyst in Donetsk. "They have long been kept around to carry out the more radical work."

"But now they have new owners outside the country."

Many, he said, had links with Yanukovych's now fragmented Party of Regions, which had its power base in Donetsk and was long bankrolled by leading business figures, including Ukraine's richest man, the region's coal and steel tycoon Rinat Akhmetov.

Party of Regions official Alexei Granovsky, who has tried to negotiate with the overt separatist leaders for the regional council, said he did not believe they were not really in charge.

He also had the impression that some kind of go-between was coordinating pro-Russian groups across the region: "The Donetsk People's Republic is not linked directly to Slovyansk.

"That is a whole different vector — the military wing."

Ukraine's SBU security service has named a lieutenant-colonel in Russia's GRU military intelligence agency, as well as a fugitive SBU officer who it says was a GRU spy, as having coordinated local militants in Crimea and now in Donetsk.

Pushilin, Ponoymaryov and others in smaller towns have yet to establish anything like the wider municipal authority seized by separatists in Crimea, though Slovyansk comes closest.

In Crimea, Sergei Aksyonov — "Goblin" to his associates — traded obscurity and control of the local wrestling association into a spotlight role on the Kremlin podium alongside Putin.

The arrest of reporters and suspected Ukrainian nationalists in Slovyansk; an anti-Semitic leaflet in Donetsk that forced Pushilin into strenuous denials of involvement; and, this week, the murder of a local councilor that Kiev is blaming on Russia and Ponomaryov's men, have all raised concerns about a repeat of lawlessness seen in Crimea. There, Ukrainian speakers have been leaving and ethnic Tatars have complained of discrimination.

Many question whether Russia can — or even wants to any time soon — take over eastern Ukraine. Polls show deep disillusion with Kiev: a combination of fears about Ukrainian nationalists and long-standing disillusion after 23 years of corruption and decline as an independent state. But barely a third of people in the Donetsk region say they would vote for annexation by Moscow.

Putin's critics see him trying to hold Kiev hostage to unrest in the east, preventing it from shutting out Russia and locking itself into the Western bloc. Moscow says it is not interfering but is concerned for the welfare of Russian-speakers.

Ponomaryov says he is in it for the long run, to defend his people against "fascists" he says seized power in Kiev. "We are on our home soil," he said. "We have given everyone a warning."

Pushilin talks of a golden future for the Donetsk Republic, rising from the pungent chaos of the occupied governor's office.

His last political manifesto called for abolishing interest on loans. Now, he says: "We are uniting for something, for the referendum, so we will build something big and bright."