MARIUPOL, Ukraine — Three protesters were killed in a clash in southern Ukraine overnight Wednesday to Thursday in the bloodiest episode to date in the month-long pro-Russia insurgency in the country.

Three pro-Russian protesters were killed and 13 injured during an attempted raid overnight on a Ukrainian National Guard base in the Black Sea port of Mariupol, Ukrainian authorities said. The Interior Ministry said a mob of about 300 people armed with stun grenades and firebombs were involved.

Masked and battle-ready militia bearing sophisticated firearms have been deeply involved in seizing government offices in eastern Ukraine, igniting suspicions that much of the unrest is being stirred with Russia's backing.

But in a four-hour televised question-and-answer session, Putin on Thursday dismissed as "nonsense" claims that Russian special forces were fomenting the unrest in eastern Ukraine.

"It is all nonsense, there are no Russian units, special forces or instructors in the east of Ukraine," Putin said.

He did admit — for the first time — that the troops in unmarked uniforms who had captured Ukraine's Crimean peninsula before its annexation last month by Moscow were Russian soldiers.

Ukraine's Interior Ministry said shots fired by servicemen in the Mariupol base initially proved insufficient to deter the pro-Russian crowd from proceeding with their assault.

There were no casualties among Ukrainian servicemen, the ministry said. At least 63 people involved in the attack were detained, but police said 38 were later released, local media reported.

The southern Ukrainian city lies on the road running from Russia along the coast to Crimea, the peninsula that Russia annexed last month. NATO says Russia has up to 40,000 troops along its border with Ukraine. If Russia was eyeing a possible "land bridge" from Russia to Crimea, it would need to take over the region that includes Mariupol.

APTN footage filmed outside the base on Wednesday night showed an unidentified man coming out to speak to masked men in the crowd armed with assault rifles. He told them the military had asked for 10 minutes to think over an unspecified ultimatum.

The masked men insisted they wanted no bloodshed. A short while later, however, a crowd of mainly masked young men armed with bats and sticks began throwing Molotov cocktails at the base's gate and at the trucks parked in front of it. Sounds of gunfire were heard in response.

One soldier involved in the battle, a 20-year-old conscript who gave his name only as Stanislav, said troops were forced to act in self-defense.

"We were attacked by unidentified people and we did not want to shoot, but they were behaving aggressively," he said. "At first we fired in the air, but they continued advancing."

One protester admitted to a hospital with a bullet wound to the stomach said soldiers opened fire on them while they were attempting to force open the gates. 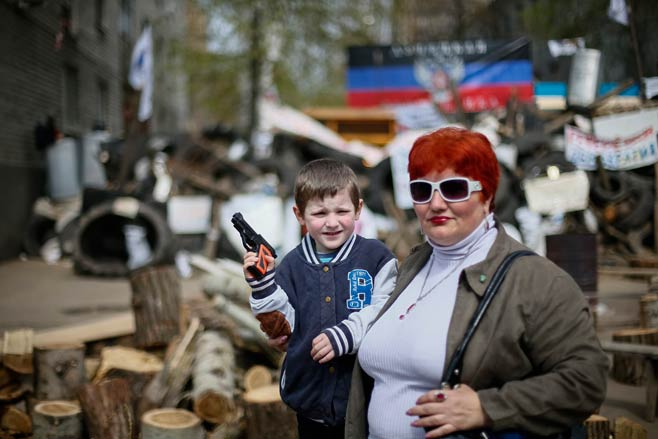 A boy with a toy gun posing near barricades in Slovyansk on Thursday.

"We just threw Molotov cocktails to light the way," said Sergei Shevchenko, a 40-year-old businessman from the regional capital, Donetsk.

Nearby residents were divided about the night's events.

"Russia is not just exporting oil and gas, but also terrorism," said 43-year-old resident Yevgeny Nechiporenko. "This shooting and blood, the blood is on Russia's hands."

Yet passersby berated Nechiporenko as he spoke, with one accusing him of being an "agent of the West."

"We are willing to give up our lives so long as we do not have to serve the fascists from Kiev," said resident Anna Govorko.

The skirmish came after the government announced an operation to retake control of Slovyansk, a city close to the Russian border that has emerged as the focal point of the armed insurgency, and government buildings in several other cities in the east.

Elsewhere in Mariupol, where pro-Russian protesters have been occupying City Hall for nearly a week, 150 people rallied in front of the building, which is now encircled by barricades of tires and barbed wire.

Spotting a television crew, 26-year-old protester Yelena Gorgeyeva got to her knees and declared "Putin, save us, I implore you!"

Crowds have blocked or attacked other troops in eastern Ukraine.

On Wednesday, hundreds of people in Kramatorsk, 15 kilometers south of Slovyansk, encircled a column of Ukrainian armored vehicles carrying several dozen troops. Soon after, masked gunmen in combat gear arrived and Ukrainian soldiers surrendered the vehicles to them.

Turchynov told parliament  Thursday that the brigade that handed over its vehicles would be disbanded and its members put on trial.

At another location near Kramatorsk, a crowd also surrounded troops on 15 Ukrainian armored vehicles. To end the standoff, Ukrainian servicemen handed over the magazines from their assault rifles to pro-Russian militia. The infantry vehicles were allowed to return to their base in Dnipropetrovsk, 225 kilometers away.

In Moscow, Putin denounced the Ukrainian authorities' decision to use the military to uproot the protests in the east as a "grave crime." He added he told his Western counterparts urging him to help disarm pro-Russian protesters that the Ukrainian government should first pull the army back.

"They are sending tanks, armored personnel carriers and cannons there!" he said. "Have they gone nuts?"